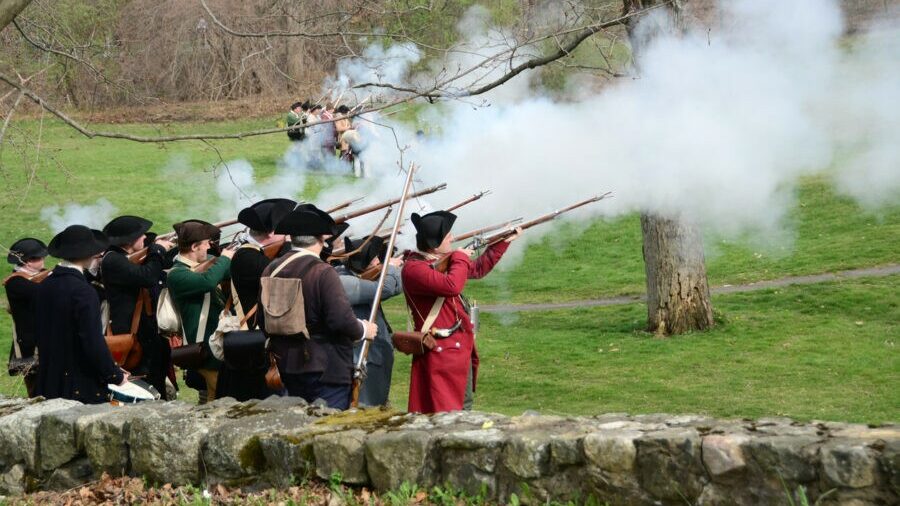 Throughout this series I’ve pointed to the importance of citizens militias, both in America’s founding and in the intellectual background of our crucial Second Amendment. What too few people realize is that such militias are more than some accident of history. Instead, they are the embodiment of a profound set of ideas, just as a large standing army embodies another, opposing set of ideas.

Militias composed of volunteers, represent and make effective the spontaneous order arising from free citizens. Standing armies directed by monarchs or other powerful executives, by contrast, make real and all too imposing the kind of top-down, coercive order imposed by oligarchies and tyrants.

It’s for this reason that so many of our Founding fathers were suspicious of standing armies, and initially reluctant to found one. They had seen that state militias played a crucial role in the French and Indian War. George Washington himself had led Virginia militiamen who held together and saved the British retreat after the catastrophic defeat of army regulars at the Battle of the Monongahela in 1755. His heroic actions that day helped make him famous, and launch him in politics.

As constitutional scholar Stephen A. Halbrook observes in That Every Man Be Armed, men such as Madison, Jefferson, and other champions of independence had studied intensely European history, and seen that free cities and nations had often succumbed to tyrannical rule imposed by their own military establishments. The Roman Republic had degenerated into an empire when its military ceased to consist of volunteer, short-term citizen soldiers, and instead become a professionalized force loyal to its commanders, instead of the people.

[T]hese sentiments, which opposed standing mercenary armies and vindicated the use of armed force to oppose tyranny, were also reflected in the Bill of Rights and indeed provide a jurisprudential commentary thereon. Aristotle, Cicero, John Locke, and Algernon Sydney provided the philosophical justification for the armed sovereignty of the populace. On the other hand, Plato, Jean Bodin, Thomas Hobbes, and Sir Robert Filmer set forth the classical argument in favor of monarchical absolutism.

Indeed, it’s fruitful to view the history of political philosophy at least partly through this lens, as divided between the partisans of liberty and those of authority. Mark W. Smith wrote about this so well in his classic book on gun rights, First They Came for the Gun Owners, that I hope you’ll forgive me for quoting him at length:

We often (rightly) remember the names and stories of those who fought for freedom. But why did they have to fight? Because many, many people fought against it.

Think of the crucial moments when powerful, well-educated, wealthy, and influential people fought on the wrong side — fought against the expansion of freedom, the empowerment of citizens, and the lifting of unjust laws:

The American Revolution, it’s crucial to recall, began with the skirmishes at Lexington and Concord. Those conflicts occurred when citizens militias sought to secure their supply of gunpowder and cannons — and British occupiers sought to seize them. We see at the very inception point of America as a political entity a conflict between these two traditions Smith sketched out, and which our founders clearly recognized: the party of popular sovereignty, and that of top-down authority.

When the same men who’d waged the Revolution drafted a new Constitution to reform and strengthen the central governance of the newly born United States, the Anti-Federalists feared that the U.S. might slide out of the popular, free tradition and into the authoritarian mold of so many failed republics before it. That is why they insisted on the inclusion of a Bill of Rights as their price for supporting the Constitution’s ratification.

Nor did the party of Authority vanish with the success of the American founding. The French Revolution slipped almost immediately from promises of “liberty” in theory to totalitarian practice, with mass conscription, aggressive wars, bloody purges and religious persecution. The course of the late 19th and early 20th centuries could be described as the resurgence of the authoritarian tradition.

America wasn’t immune, and still isn’t. As Smith went on to write:

Of course, every generation has had its share of people who didn’t trust their fellow citizens with freedom. Elitists who squinted scornfully at the “commoners.” Nativists who didn’t trust German or Irish immigrants, because of their language or their religion. Ex-slaveowners, who wanted to make sure that black Americans couldn’t defend their basic rights with firearms.

In the twentieth century, the Progressive movement, led by Woodrow Wilson, took aim at the U.S. Constitution itself in an effort to expand their power to impose social change on recalcitrant, free Americans.

And of course, today, the enemies of free speech and free religious exercise are (no surprise) the enemies of citizens’ gun rights. Instead, they have learned to fetishize the use of force by the U.S. military in foreign adventures, the FBI at school board meetings, and now armed IRS agents menacing the citizenry.

As I will show in my next installment, the Second Amendment’s protection of private firearms ownership was central in their minds to the preservation of all the other liberties guaranteed in that Constitution.

Our Founders Meant the Second Amendment as Permanent Insurance Against Dictatorship