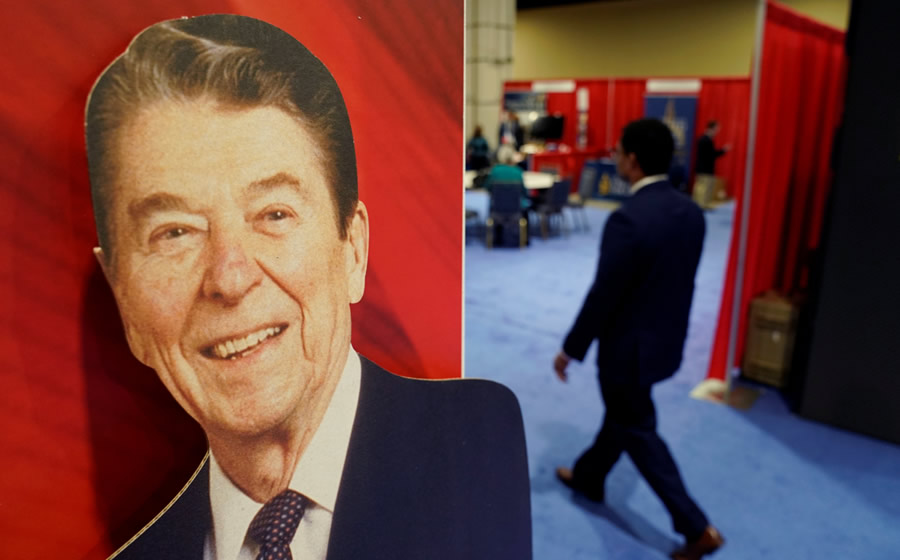 The image of President Ronald Reagan is on display at an exhibit stand at the Conservative Political Action Conference (CPAC) in Oxon Hill, Maryland, U.S., Feb. 28, 2019.

I honestly try not to feed the media hype machine around Vogue’s Most Stylish Socialist, Rep. Alexandria Ocasio-Cortez, by not reacting to every ridiculous thing she says. As I’ve pointed out before, I’d be doing it all day, because she’s practically a non-stop fountain of nonsense. When she’s on her notes, she sounds like Fidel Castro’s PR agent, and when she’s away from her notes, she sounds like a painfully uninformed bartender who’s been sampling the goods.

But when AOC tells a crowd of young people at the SXSW (South by Southwest) music and media festival in Austin (where the alt-rock bands aren’t the only ones filling the air with incomprehensible gibberish) that capitalism (which has lifted tens of millions of people out of poverty) is “irredeemable,” that Ronald Reagan’s economy was racist, and that America must be completely transformed because we can’t settle for just a 10% improvement on “garbage” … well, that sort of demands a response.

There are quite a few good refutations already on the Internet. Here’s one that covers the basic points, which are so obvious, only the holder of a liberal arts degree from a Boston college wouldn’t already know them.

But let me add just a few that haven’t been talked about as much:

1. Ronald Reagan left office in 1988. AOC was born in 1989. That means she has zero personal knowledge of what the Reagan years were like, nor of the economic failures and foreign policy fecklessness of the late ’70s that led to his election. Everything she knows about Reagan, she learned from leftist college professors, which is like saying that everything you know about Judaism, you learned from Louis Farrakhan. Or everything you know about economics, you learned from Alexandria Ocasio-Cortez.

2. When Reagan talked about people abusing the welfare system and losing their work ethic, he never assigned any racial aspect to it. In fact, it was widely acknowledged back then that more white people than black people were on welfare. When Reagan criticized welfare dependency, his liberal political enemies accused him of racism, even though they were the ones making racist assumptions about welfare recipients, not him. In this screengrab from video, Alexandria Ocasio-Cortez speaks during a session of SXSW 2019 on March 10, 2019, in Austin, Texas.

America’s working class was so furious with Reagan for “screwing them over” that they reelected him in 1984 in a 58.8% landslide. His opponent, uber-liberal Walter Mondale, carried only one state (his home state of Minnesota), and Reagan’s win in the Electoral College was a record 525-13.

4. The American economy, which is notching up record low unemployment rates in every demographic, is not “garbage,” nor is anything else about this country, which still stands as a beacon of freedom and opportunity to oppressed people around the world, despite the worst efforts of miseducated leftists to “fundamentally transform” it into Venezuela.

Ironically, however, in Venezuela, where the people sadly fell for the phony promises of “economic justice” and free stuff overseen by a benevolent socialist government, people are now sifting through garbage looking for anything to eat. And that’s hard to do, when you can’t see the garbage due to the power outages, or wash it down, since the power knocked out the water pumps.

You can tell Venezuela is nearly at North Korea-levels of socialism, since it’s so dark, you can’t even see all the starving people. Maybe that’s part of the plan. When you look at nighttime satellite photos of North Korea, it is, appropriately enough, a black hole surrounded by light. Socialism is turning Venezuela into a black hole, too. AOC’s “Green New Deal” promises to do the same for us. And like Nicolas Maduro, when it all ends up in disaster, she can just blame Republicans and say socialism works, the “right” people just haven’t been in charge yet. This Jan. 30, 2014, file photo shows the Korean Peninsula at night. North Korea is almost completely dark compared to neighboring South Korea, right, and China, left. The North’s capital city, Pyongyang, appears like a small island of light, despite a population of 3.26 million (as of 2008).

I wonder if all those young hipsters cheering her at SXSW realize that in Venezuela, the power outages mean all their gadgets are dead and they can’t access any social media sites to hear about how great socialism is?

That reminds me of this rueful Cold War era joke that, like a lot of awful ideas from that time, is unfortunately making a comeback online:

What did socialists use before candles? Electricity.

5. Finally, to all those young hipsters cheering for AOC and her incoherent babbling about Reagan and socialism, I would ask you this: If she and her ilk ever do take over, and inevitably destroy the economy, do you think there will be any more SXSW festivals? And if so, do you think you’ll be able to attend? Considering that badges for entrance cost between $1325 and $1650 each, you’d better hope someone redistributes a lot of other people’s money to you.

Personally, I can’t think of a better illustration of the current intellectual emptiness of the left in America than the sight of a designer-clad socialist media star ranting incoherently against capitalism to a crowd of people who paid $1650 apiece to listen to it.