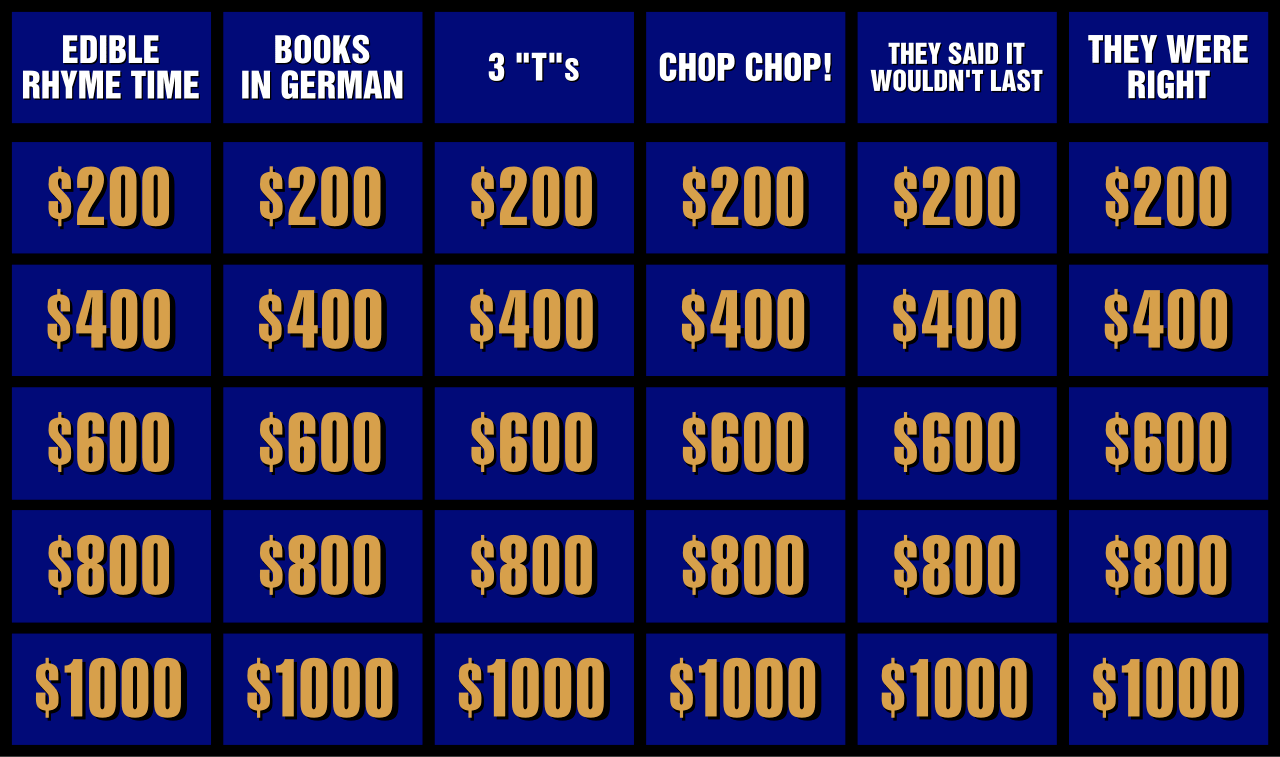 America’s ruling class — The Hive I’ve been warning readers about — has hit a moment of crisis. It lacks a public figure around whom it can organize. The ideology it wielded to dominate the rest of us crumbles under it like broken feet of clay. One person ought to be able to rally our citizens and magnetize the nation into orderly filings of iron. But he’s simply … missing in action.

America has no Jeopardy! host.

No, I’m not kidding. Each proposed replacement for the avuncular Alex Trebek keeps going down in flames. The reasons for each one’s rejection are hauntingly similar. Each said or did something un-Woke in the past. The context doesn’t matter. Nor do the motives. It doesn’t even matter if what the person said was true.

There are truths you’re not supposed to tell, and lies you’re obliged to internalize and bellow back with feeling, like the cloying reprise of the vomitous musical Cats.

Now there’s an anthem I think we can all unite to kneel for, fingers in ears.

For instance, you’re not allowed to admit that there are just two human sexes, whatever mental illness might whisper to some troubled people. In fact, we’re now forced to repeat fake names and nonsense pronouns, and believe in fictional entities out of 90s comedies such as “pregnant men.”

Nor may we acknowledge that Asian immigrants typically do better than native-born poor Americans (black or white) on standardized tests. And in math and science classes. And in college … if you don’t set up quotas to keep them out. And at jobs requiring relevant skills … if you’re permitted to hire them.

Or if you absolutely must face this fact, you need to explain it away by pointing to “structural racism” or some other Just So Story. And hire disproportionate numbers of lower-scoring, less-skilled people from historic “victim” classes. Plus new ones like people with weird sexual problems — whose costly, useless surgeries and steroids the System’s obliged to pay for. We must all pretend that Stacey Abrams passes for a statesman, and Bruce Jenner for a woman.

This is no way to run a meritocracy, my friends. The Chinese know how to do that, and I don’t know how they keep a straight face anymore when they talk to us. I think they’ve started sending Sleepy Joe his daily orders inside fortune cookies, just to complete his humiliation. And ours.

Our ruling class’s official story is tearing itself apart. For decades, they’ve pretended that the country is ruled by a patriotic, hard-working meritocracy. This helped justify collecting so much of the wealth in so few hands, in so few zip codes. It just so happens that so many of the smartest, most-deserving people happen to all live together in glittering enclaves, and think exactly alike. If you don’t buy that story, proles, we might just take away your iPhones.

A Global Revenge of the Nerds

Globally hated truth-teller Charles Murray makes the case that even an authentic meritocracy is basically unfair and self-destructive. It amounts to a conspiracy of the kids born lucky with high IQs to exploit and bully the less-fortunate. A vicious, oligarchical, global Revenge of the Nerds.

But how can you keep up even the façade of a meritocracy, when the leaders the System burps up are bumbling fools and obvious clowns? When your so-called elites do blatantly traitorous things? There’s no other word but “treason” to describe what a bipartisan coalition of Deep State swamp creatures committed in 2020. Dozens of past leaders of U.S. intelligence agencies put their names to a letter claiming that the Hunter Biden laptop was “Russian disinformation.”

The Oligarchs and Their Mobs

How can you run anything competently — from a pullout in Quagmireistan to a pandemic response — when the criterion isn’t saying things that are wise, true, or even factually accurate? Instead, it’s checking boxes off to make sure that they won’t infuriate our hordes of “community organizers” and victim “advocates,” who could go out and start a pricey street riot. Or falsifying national security information to please your foreign paymasters.

Read Michael Anton’s grimly brilliant book, The Stakes. There he explains how our bicoastal Oligarchy depends on masses of votes supposedly cast (or faked on behalf of) … idle, obese, ignorant hordes of angry poor people dependent on government jobs or straight-up public assistance. (Plus countless busloads of needy immigrants.) The Oligarchy wields them to dispossess, disarm, and at last simply replace the country’s original backbone — freedom-loving, home-owning, gun-wielding churchgoers.

How long can you go on pretending that an electorate that fetishizes George Floyd and Jacob Blake, choosing leaders like Joe Biden and Alexandria Ocasio-Cortez, amounts to a Republic of free citizens identifying “natural aristocrats” (as our Founders hoped)?

Can We Still Have Jeopardy! When Facts No Longer Matter?

The whole premise of Jeopardy! was simple. Anyone in America who’s “smart” enough can play. And if he proves his “intelligence” against his fellow competitors, he can win. He won’t just rake in prizes, but become a minor celebrity. Perhaps start his own podcast, as the witty (now-canceled) Ken Jennings did. Folks have launched whole new careers on the strength of being long-time Jeopardy! winners.

What Jeopardy! tests, of course, isn’t abstract intelligence, of the sort that genius physicists or mathematicians wield. Nor is it the wisdom of philosophers and mystics, statesmen or poets. It tests, instead, factual accuracy. Bookish, pedantic people who like to accumulate facts will wipe out creative, insightful types.

Jeopardy! depends on an old-fashioned, 19th-century version of middle-brow intellectualism. August Comte would have loved Jeopardy!, since he thought all religious and philosophical truths would someday give way. We’d be ruled by scientific “experts” based purely on “facts.”

We Need a New Cult, and Now We Have One

But in his old age, Comte knew better. As that grandiose, insufferable French madman continued to study history, he realized that religion of some kind always ends up on top. That the stuffy men in frock coats reciting “facts” they found in their laboratories can’t hold onto power forever. The Mob always proves too big and too ignorant.

So in order to keep control, Comte recommended, any Hive needs to do something different. It needs to start its own religion, from scratch. Then sell its political program to the common hordes using superstition. Wrap up the elite’s platform in ritual, surround it with taboos, and learn how to push the emotional buttons of the sheeple. That’s the formula for surviving, if you’re the Wizard of Oz.

The Dumbest Religion in History

Don’t believe me that the Oligarchy is in fact running a cult? Why else are public school teachers in San Diego forcing kids to repeat prayers to the Aztecs’ gods of human sacrifice? That’s not some policy driven by facts or reason. Nor was the pretense of both parties (George Bush’s and Al Gore’s) that Islam is a “religion of peace,” which merely needed a quick American makeover. Then it would be harmless Unitarianism plus hummus.

The Woke cult of racial and sexual victims is today’s invented religion, of the kind Comte had in mind. The Oligarchy thought it could use it to keep control. But now it’s learning that mindless superstition comes at a price. Sometimes, as in Afghanistan, reckoned in the trillions. All of it, and thousands of brave non-oligarch’s lives, all lost on Jeopardy!