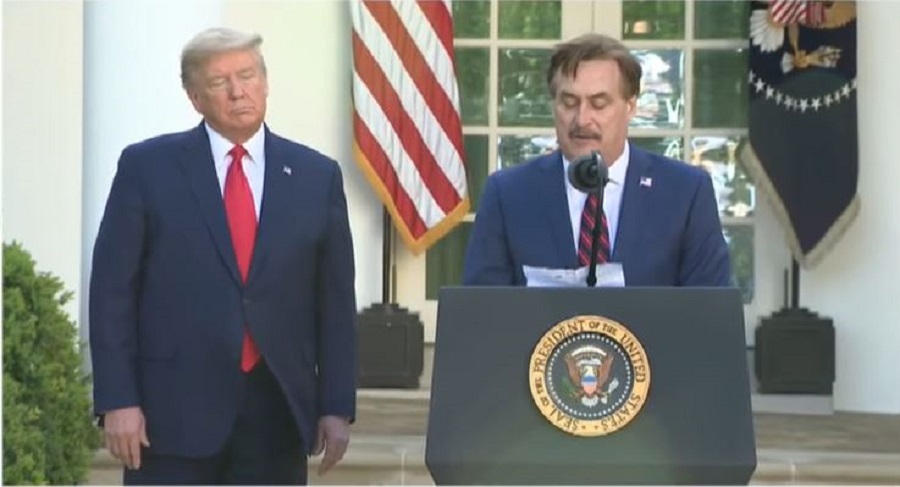 Though some deny it, many harbor a strong hostility toward Christians in our society, especially those who obediently wear their faith on their sleeves.

Mike Lindell, owner of MyPillow, and the Rev. Franklin Graham fall squarely into this category. Both are Christians. Both support Donald Trump. Both speak out about both.

The critics’ refusal to withhold their criticism during the dreadful coronavirus crisis shows the intensity of their antipathy.

Lindell was among the CEOs Trump invited to speak at his daily coronavirus press briefing on March 30. Lindell announced he would convert 75% of his manufacturing operation to produce cotton facemasks, aiming to make up to 50,000 a day by Friday.

Like so many of his fellow business leaders who are recalibrating their companies to assist the nation in crisis, Lindell praised Trump for his leadership, but he went a step further. “God gave us grace on Nov. 8, 2016, to change the course we were on,” said Lindell. “God had been taken out of our schools and lives. A nation had turned its back on God. And I encourage you: Use this time at home to get … back in the Word, read our Bibles and spend time with our families.”

The mainstream media could not let this stand. “Trump just called the ‘My Pillow’ guy up to the podium in the Rose Garden. You cannot make this stuff up,” said MSNBC anchor Ali Velshi.

“The ‘My Pillow Guy’ was at the Corona Virus briefing today?” tweeted Miami Herald reporter Julie K. Brown. “Boy oh boy, do we need SNL this Saturday. If this had been a SNL skit we would have thought it was fake, right? You can’t make this s*** up. Who is going to play the ‘my pillow guy’?”

“Look, it’s hard to fill up 90 minutes’ worth of material every single day, so you need to get some sponsored materials/infomercials,” said New York Magazine writer Jonathan Chait.

“Trump now has the guy from My Pillow doing a campaign commercial for Trump’s 2020 campaign in the middle of a press conference about a deadly virus,” said Daily Beast and CNN opinion columnist Dean Obeidallah. “How can any real news network air this BS?! #StopAiringTrump.”

These mockers didn’t go after any of the other business leaders on the stage that day. I understand that some find it distasteful to say God directed Trump’s election, but should that blind them to the service Lindell is performing? Does Lindell’s vocal Christianity so thoroughly repulse them that they would reject his contribution if they could? It seems so, based on their reaction. That’s how you know it’s hatred — that they would forgo his life-saving works because of his beliefs.

The critics were even more disturbed by Franklin Graham, whose charitable relief organization, Samaritan’s Purse, set up a temporary hospital in New York City’s Central Park for coronavirus victims.

“Franklin Graham has a long history of spewing anti-LGBTQ hate speech, and I find it extremely troubling that he and his organization are involved in our relief efforts in any way,” New York City Council Speaker Corey Johnson tweeted.

“It’s a shame that the federal government has left New York with no other choice but to accept charity from bigots,” tweeted New York state Sen. Brad Hoylman, who also called Graham a “notorious anti-LGBTQ pastor” on his official Senate page.

It’s alarming that some are so enslaved by their prejudices that they would condemn or even refuse critical humanitarian aid. It’s hard to wrap your mind around that.

A Spirit of Grace

But I will say that this crisis is also bringing out a spirit of grace in others, who strongly denounced the bigotry coming from those protesting Graham’s alleged bigotry. The Blaze quoted many who were critical of these graceless New York officials. “Now we can all really see where the actual hate comes from,” said one. Another said: “As a gay New Yorker, I’d like to sit down with them over a cup of coffee and thank them for putting themselves in harm’s way. That’s how change of heart happens. They are risking their lives. We should be grateful.”

Franklin Graham’s response hit the right balance. “We do not make distinctions about an individual’s religion, race, sexual orientation, or economic status. We certainly do not discriminate, and we have a decades-long track record that confirms just that,” said Graham. “This is a time for all of us to unite and work together, regardless of our political views. Let’s support one another during this crisis, and we pray that God will bless the efforts of all those battling this vicious virus.”

Let’s be aware of the regrettable negativity during these trying times, but let’s focus on — and rejoice in — the goodness dwarfing it. Americans are a gracious people.