America Was Founded by Conspiracy Realists … Like Tucker Carlson 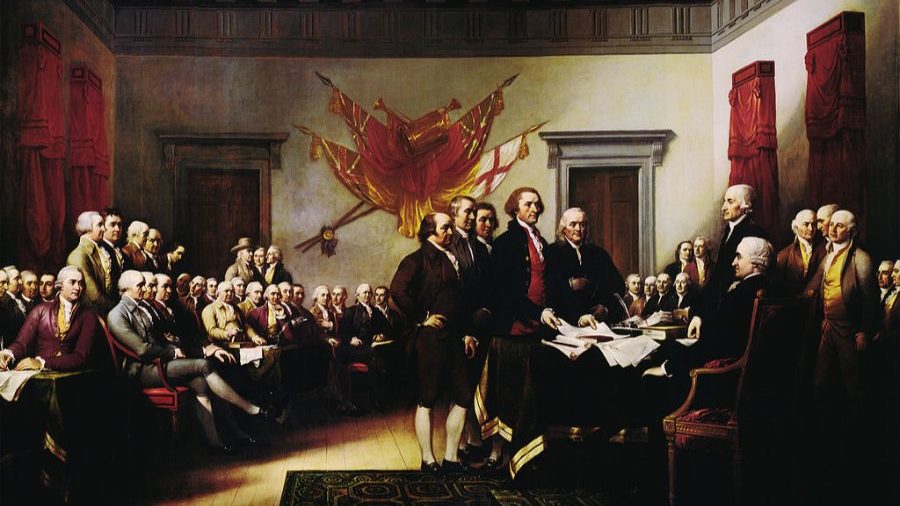 If you weren’t watching Tucker Carlson last Friday, you missed the most important 15 minutes of television in decades. In a brief, pungent, fact-packed monologue, Carlson adduced the most important facts of our present political crisis, and key events in our history. Then he quickly and convincingly connected all the dots … which formed, alas, a swastika.

We live now under a burgeoning authoritarian government, as surely as any German stuck there in 1933. There too, a power-hungry minority of ideologues, allied with corrupt elites and thuggish mobs, employed Anarcho-Tyranny to seize hold of the government, without ever winning majority support. There as here, any opponents were quickly demonized as traitors and persecuted, while weaklings and squishes (see David French, Russell Moore, and Rod Dreher; Mike Pence, William Barr, and Mitch McConnell) scrambled to collaborate with the dictators.

Our Gulag on the Potomac

Think we’re still in a free country? Tell that to the demonstrators who “trespassed” at the Capitol on January 6, who after years of cruel mistreatment are begging the government to transfer them to Guantanamo Bay. Accused of being “insurrectionists” and terrorists (for instance by George W. Bush), these patriotic Americans would rather be housed with the rapists and killers of ISIS, whose conditions are more humane.

Tell your fairy tale about what a free country this is to the members of our military who were forced out of the ranks, dishonorably discharged and stripped of the pensions they’d earned, because they refused to stick a needle in their arms against their consciences. Or to those who lost their jobs rather than take the untested Dead Baby Vaccine which they didn’t need, and which is now apparently killing young athletes around the world.

Or to those whose mothers and fathers died alone, unvisited by family members or clergy, in state-run nursing homes after Democrat governors dumped COVID patients there to spike the death statistics and justify “states of emergency.” Honest American seniors gasped out their last breaths by the thousands sequestered behind plastic, then were denied Christian burial and incinerated like shelter pets … or aborted babies.

FBI Sleeper Agents at Your School Board Meeting

Or to parents who objected to their children’s indoctrination with tribalist hatred of white people, crude Marxist dogma, or pornography laced propaganda for sex-change operations. The Justice Department stigmatized such moms and dads as potential domestic terrorists, and sent the FBI to surveil them.

Or to pro-life citizens now subject to both pincers of Anarcho-Tyranny: targeted by pro-choice terrorists whom the government won’t investigate, and raided by FBI agents for peaceful protests in public. Anarchy for me, tyranny for thee … just like the Nazi brownshirts working hand in glove with the cops.

If you want a more systematic exposition of our burgeoning dictatorship, get hold of Michael Anton’s recent book, The Stakes. In it, he shows how a hostile elite has seized virtually all the levers of power, both public and private, in our country, and is using them to subjugate and crush traditional Americans, and replace us with docile immigrants.

In Carlson’s monologue he cited “permanent Washington,” our ruling elites and their allies, citing the same high crimes I frequently write about. He focused on the most ominous one, which most of us missed at the time: the coup d’etat by the FBI and other intelligence agencies during Donald Trump’s transition. With the aid of RINO infiltrator Mike Pence, the FBI targeted General Mike Flynn, whom Trump had wisely appointed to oversee and rein in the Deep State.

The United States of America was founded by patriots motivated by what their enemies dismissed as a paranoid fantasy: the fear that the British Parliament and monarchy were planning to strip the American colonists of their liberties.

The FBI faked a criminal case against Flynn and against his son, and used the threat of imprisoning family members to force their new boss to resign. Trump had no idea of the depth and ruthlessness of the forces arrayed against him. He thought it was a free country, too, bless his heart.

And whose idea was it to target Flynn with an arcane 18th Century law never successfully used to convict a single American? Then Vice President Joe Biden, in the January 5, 2017 Oval Office meeting where President Obama and his top officials conspired on how to use the bogus Trump Russia investigation to sabotage the incoming Trump Administration.

Carlson pointed to the further lies of the Deep State weaponized against Trump, from the phony “Russia Collusion” to the cabal of bipartisan security agency hacks who convinced the electorate that Hunter Biden’s laptop was “Russian disinformation.” The same conspiracy is even now trying to goad us into an open war with Russia, which might well end with mushroom clouds over our cities. If Washington, D.C. were one of them, that might be some rough justice there.

Then Carlson looked back at previous outrages, from the assassination of John F. Kennedy — which Robert F. Kennedy, Jr., now openly blames on the CIA — to the orchestrated destruction of Richard Nixon, the most popular president in history, for covering up petty campaign crimes that don’t even compare to abuses committed by previous presidents. (Under JFK, the FBI tried to blackmail Martin Luther King, Jr. into suicide. LBJ lied America into the Vietnam War.)

Now, our media have trained us to look askance at “conspiracy theorists,” a term which the CIA actually invented and released via journalists who worked for it to discredit skeptics of the laughable Warren Commission. And of course, many such theories are wacky, malicious, or delusional. For instance, the Protocols of the Elders of Zion, which blames modernity’s problems on a secret conspiracy of Jews. Or the 1619 Project, which attributes black dysfunction to a secret cabal of slaveowners, who founded the U.S. in order to … stop King George III from freeing the slaves.

Our Founders Were Conspiracy Realists

But many, many conspiracies were real. I list a dozen genuine elite conspiracies that changed history, here. And in fact, the United States of America was founded by patriots motivated by what their enemies dismissed as a paranoid fantasy: the fear that the British Parliament and monarchy were planning to strip the American colonists of their liberties, and rule them as virtual serfs. Most of the Declaration of Independence is taken up with proof of that conspiracy theory.

Our founders fought the War of Independence, and fought the ratification battles over the U.S. Constitution, precisely to set up a system of government that would prevent corrupt elites from hijacking the State and using it to oppress and pillage the public. Because, as good Augustinians who’d studied Western history, our founders knew all too well: that’s what governments run by fallen men tend to do, over and over and over again.

Our System Has Been Compromised Before

Our unique system of government, designed to frustrate power-hungry elites, has been tested again and again. It was a greedy elite of Southern slave-owning planters that goaded a dozen states into seceding from the Union. They risked our country’s destruction rather than see their power to spread slavery and profit from it challenged.

In the early 20th century, Progressive elites led by Woodrow Wilson tried to make the Constitution meaningless, and grab for the federal government massive power over citizens. Wilson maneuvered the U.S. into the First World War, and used the pretext of a “national emergency” to imprison his critics, and massively grow the government.

The Second World War massively increased the powers of the federal government, which never gave those powers back. It also created the Deep State, including a CIA that would go on to wiretap Americans, experiment on them with mind-altering drugs, and meddle illegally in U.S. politics. Meanwhile, Congress lazily shifted massive power to oversee our daily lives to appointed bureaucrats of the Administrative State.

The Patriot Act Made the Deep State Untouchable

Of course the War on Terror provided an even more convenient pretext for unleashing our spy agencies from any supervision by elected officials. As I showed in my column, “We Fought Jihad … and Jihad Won,” the Patriot Act essentially set up the intelligence community as the fourth branch of government, supreme over the other three and answerable to no one.

We Fought Jihad and … Jihad Won