In his opening segment on last night's show, Tucker Carlson called Biden is the 'most destructive president in American history' — and explained how even DC wants him out. 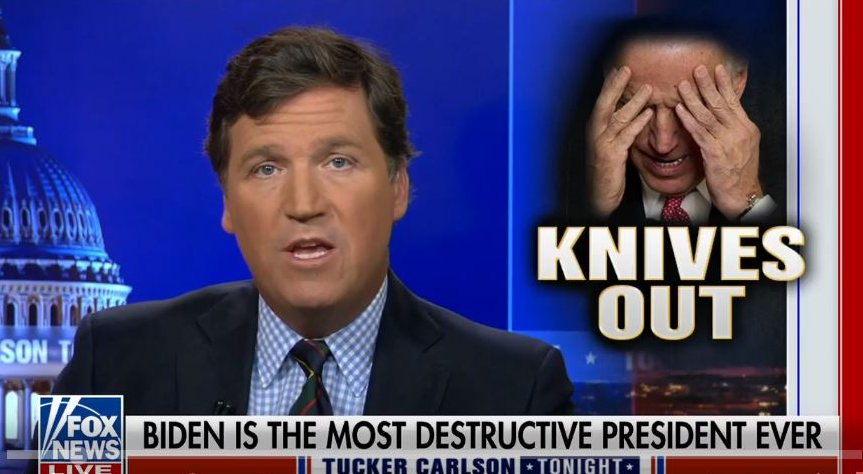 Even CNN is calling out President Biden for his misdeeds, Tucker Carlson said Thursday on his show Tucker Carlson Tonight. That’s when you know things are bad — when a leftist media outlet is highlighting a Democratic president’s failings. But they aren’t talking about his open borders policy — which would make sense. They’re outing him on breaking federal classification rules. According to Carlson, that’s like “arresting El Chapo for expired plates. It’s missing the point.”

Why would the leftist media point out the classified documents but ignore the bigger problem of illegal immigration at the border? It all goes back to what ‘Permanent Washington’ wants. Carlson pointed out:

[Biden] alone took home classified documents. He didn’t have help in doing that, but allowing the country to be invaded, that’s not something you can do by yourself. So, if Biden were to be taken down for opening the southern border, a lot of other people would go with them. He had a lot of accomplices. Permanent Washington doesn’t want that and ultimately and here’s the point: Permanent Washington is in charge. It’s not the democracy you imagined. We’re seeing that now.

What we are seeing actually is 50 years in the making. To understand, Carlson said, we must go back at least to Richard Nixon’s presidency. One thing we should know, but our children aren’t taught in schools, is that Richard Nixon was the most popular president in American history. “In fact, if any president could claim to be the people’s choice, it was Richard Nixon,” Carlson said. “Richard Nixon was re-elected in 1972 by the largest margin of the popular vote ever recorded before or since. Nixon got 17 million more votes than his opponent.” But less than two years later, he was out of office, and replaced by Gerald Ford — someone Carlson called “an obedient servant of the federal agencies.”

The unqualified Ford, who served on the Warren Commission, was put in place by federal agencies who wanted to destroy Nixon. Eight months later, Ford was president of the United States. “All of that actually happened,” said Carlson. “None of it’s secret. … [B]ut no mainstream news organization has ever told that story. It’s so obvious, yet it’s intentionally ignored and as a result, permanent Washington remains in charge of our political system.”

Our democracy is a joke, said Carlson. “Unelected lifers in the federal agencies make the biggest decisions in American government and crush anyone who tries to rein them in and in the process, our democracy becomes a joke.

“So, that’s how things actually work in Washington,” he added. “Let’s stop lying about it.”

But don’t feel bad for Joe. “Joe Biden does not deserve our sympathy. He’s being shafted, but don’t weep for him.” We the people deserve better. “[T]he rest of us do deserve a better system, an actual democracy. When people nobody voted for run everything, you are not living in a free country.”

The Brew: Another Nail-Biting Day in the Race Between Impeachment and the 25th Amendment