Some questions from the "children of the same foul spirit" who voted for you. 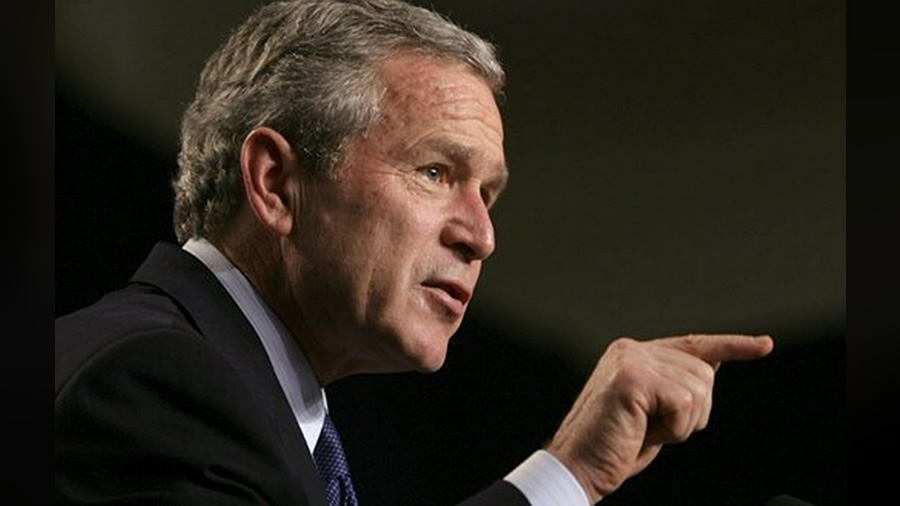 Empathy’s always a challenge. Not just to feel bad that someone else is suffering, but to strive by imagination to put yourself in his shoes, maybe even walk a mile in them. Or with him, helping to shoulder his cross. That’s close to the heart of our faith, isn’t it?

Today I’m trying to put myself in the mind of someone very different from myself. Namely, of some earnest, lifelong evangelical Christian who once backed George W. Bush. Someone who read this weekend that Bush compared the January 6 protestors who suspected a stolen election to … the September 11 hijackers who murdered thousands of Americans. (Both are “children of the same foul spirit,” Bush said.)

I’m imagining the feelings of someone who once trusted Bush, made allowances for him, considered him “one of us” and a “fine young man.” A person who now is processing a national and personal … betrayal.

A Bitter and Fruitless Shrub

Work with me. This isn’t easy. I deeply distrusted George H.W. Bush, for strangling the Reagan revolution in its cradle. For filling the White House with RINOs. For promising a fuzzy, Masonic “New World Order” instead of just an end to the wretched Cold War.

But that man was a patriot, a war hero, and a statesman by comparison. The difference between father and son turned out to be epic, as grand as the canyon dividing Irving Kristol from William, or Teddy Roosevelt from … Eleanor. The elder Bush, for all the flaws in his worldview, was a genuine representative of the American elite, back when it was honorable. The younger Bush is a cautionary tale about raising kids with too much money and not enough guts.

My girlfriend went to high school with boys from the Dallas Hunt family — then the richest clan on earth. Those boys, she told me, drove the worst car in the high school, and spent summers fixing roofs alongside Mexican migrants in the 110-degree sun. You wouldn’t have seen any Bushes up on the roof along with them. The Hunts believed in building character, the Bushes in establishing an American royal family. An inbred, entitled dynasty that would saunter through life collecting honors, raking in money, and smiling at the simple folk. The folks trusting enough to go on voting for them.

Questions from the State Fair Crowd

On behalf of all those fine, hardworking people who once respected you, Mr. Bush, I have some questions.

When you promised a “modest foreign policy” on the campaign trail in 2000, were you just straight up lying? Or simply reading a script out loud without understanding the words?

When you shrugged at all those intelligence reports in summer 2001 warning about al Qaeda planning to fly airliners into buildings, and then it happened, did you feel … guilty? Responsible? Ashamed? Or did you just go back to reading My Pet Goat, reminding yourself that you were the adult in the room. Or at least Dick Cheney was.

You made it one of your first priorities to spirit every member of the bin Laden family out of America. Then cover up Saudi complicity in the attacks. Then solemnly assure Americans that jihad had nothing to do with Islam, a gorgeous “religion of peace.” Were you doing that out of loyalty to Americans, or your pals in the oil industry? Were those the only Americans you really thought about?

When you let bin Laden slip away at Tora Bora, then redirected our military to prepare instead for invading Iraq, what flickered through your mind? Were you thinking back to all those games of “Risk” you played over cocktails, collecting your gentleman’s “C” in Yale’s Gothic halls? The key to winning that game, you might remember, is controlling the Middle East. Are you proud of where we stand now today?

Loyalty to the Oil Lobby

You knew about all the official Saudi ties to al Qaeda, and that Saddam Hussein had none. You knew that your dad’s decision to defend Saudi Arabia from Iraq with U.S. troops on its “holy soil” was what had set bin Laden off on his jihad in the first place. That Hussein was a secular despot, presiding over a brittle, artificial country full of groups that hated each other. (Full of vulnerable Christians whom you would do absolutely nothing to save from genocide, when the time came.)

Hussein was trying to buy some mustard gas — for use against Iran, in a reprise of a war in which the U.S. had backed him. Yet you let your team of empire builders scoop up every fragment of bad intelligence that anybody dumped, and tell America that the next “smoking gun” might be a “mushroom cloud.”

We had to fight (and torture, and bomb, and impoverish) Iraqis “over there” so as not to fight them “over here.” Did you really believe that? Or were you just playing “Risk,” this time with real live Americans? Did the soldiers you dumped into hells like Abu Gharib ever flicker through your mind? The national guardsmen who wouldn’t spend the Iraq War as you’d spent Vietnam, keeping Texas safe from the Viet Cong?

Americans Will Bear Any Burden on the Road to Nowhere

In your Second Inaugural you duly repeated that insane speech your staff cooked up for you. You told us all that a “fire in the mind” drove every nation around the world to crave … American democracy. This as the nations of Iraq and Afghanistan fought tooth and nail to drive us out. Did you process the words you read aloud, Mr. Bush? Or were they just … empty syllables which you had to read so you could get back to your ranch? Let Cheney and Rumsfeld worry about the details. Did that vaunting make you feel like a statesman, for an hour? Did it pump your testosterone count?

When you cracked jokes to reporters about the non-existent “Weapons of Mass Destruction,” did it ever occur to you how macabre and creepy that was? Or were the thousands of dead or maimed Americans who believed you part of the punchline? Was that you being … edgy?

You back mass immigration to replace the kids Americans are too poor or beaten down to have. You’re publishing books now supporting that, based on your happy memories of the Mexican servants who raised you. So much more docile and friendly than all the rednecks and goobers you had to pretend to respect and pray alongside. Did you think of your hapless voters as … millions of Forrest Gumps?

You Did Your Best to Help Biden Win. Happy Now?

You wouldn’t even vote against Joe Biden, because at least he didn’t make fun of you and try to steal your political party. Your family’s party, which now George P. Bush — the latest slacker dilettante to bear that storied name — expects to inherit as Texas Attorney General. Let’s see how Texas voters decide. “Fool me once, shame on you. Fool me twice … I won’t get fooled again.”

And now you’re comparing little old ladies who took selfies at the Capitol, who came to sing and pray that their votes would in fact be counted, to the Saudi terrorists you failed to stop from slaughtering our countrymen. Thanks for that, Mr. Bush. You’ve confirmed what we all suspected.

Just one final question: What did Americans ever do to you, Mr. Bush, to deserve you?