Grace and truth cannot be separated without doing immeasurable harm to one or the other. 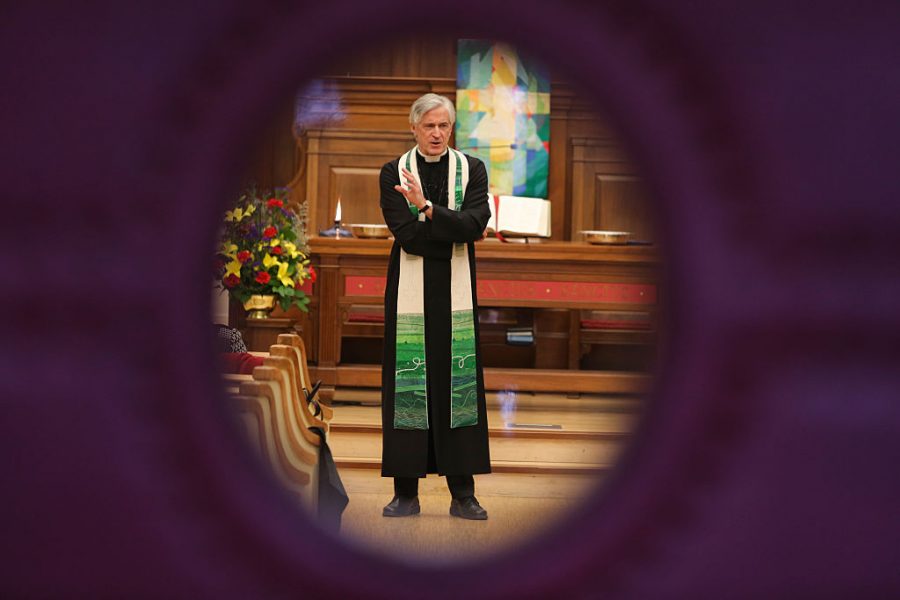 Reverend Roger Gench preaches at New York Avenue Presbyterian Church on January 29, 2017 in Washington D.C. NYAPC is an affiliate of the More Light Presbyterians, a group that affirms LGBT lifestyles.

No sooner had the Nashville Statement on biblical sexuality been issued than we began to hear a common refrain from the left. “This is another sign that the religious right is dying! This statement represents the last gasp of the old, antiquated guard! It’s time to say good bye and good riddance! Let’s welcome the new thing the Spirit is doing!”

In fact, it’s the religious left that is dying. Those who uphold Scripture are seeing blessing and increase around the globe. Before I back up this statement, here’s what some “progressive” Christian leaders are saying.

His article is titled, “The Nashville Statement and the Decline of the Religious Right.” He concludes with this salvo:

In the end we’re stuck with a meaningless document. It adds nothing to the conversation that hasn’t been said. If anything, its fake compassion increases the agony of LGBT Christians. All that’s accomplished by this document is a little press for the religious leaders who signed it, a whiff of air time for the disenfranchised. The Statement underscores the obvious: in the age of Trump, the Christian Right has lost its moral authority. These guys — they’re almost all men — may be have a spiffy website, but nobody’s listening.

Pastor John Pavlovitz is a frequent critic of conservative evangelicals. He recasts the Nashville Statement in his own words. He claims that the framers of the Nashville Statement are really saying, “We’ve chosen to wage cheap war on innocent and vulnerable people [homosexuals] in order to feel mighty again.” (Quick note to Pastor Pavlovitz: Do you really believe this?)

This is how he rewrites the statement’s Preamble:

Evangelical Christians are at the precipice of extinction — and we know it. We are a profoundly endangered species coming to grips with the urgency of the moment, of our impending disappearance, of the whole thing going sideways here in the Bible Belt — and we’re in a bit of a panic.

We are leaking people from our churches, watching multitudes walk away in disgust, and losing market share in the religious landscape, as well as the vice-like stranglehold we’ve had on American politics for the past 241 years — and we are rightly terrified.

So much for the Pavlovitz paraphrase. Shall we return to reality?

The World’s Leading Churches Are Conservative on Sexual Ethics

It’s true that many evangelicals, me included, are deeply concerned about the moral and spiritual condition of our nation. And it’s certainly true that we are burdened for the many young people who have dropped out of church. They consider themselves “nones” — having no religious affiliation.

The most thriving, growing churches in the world hold to conservative sexual ethics.

But, as has been demonstrated time and time again, it’s the “progressive” churches that are “leaking.” It’s the liberal denominations that are fading. This is true in America as well as around the world. Since the so-called progressive Christians have pointed to numbers, let’s take a more careful look.

Out of the 100 largest churches in America, how many are conservative? The vast majority, at the least. The same with the fastest growing churches and the fastest growing denominations. Almost all of them hold to conservative biblical values, even if they are “progressive,” chic and cutting-edge in other ways. Almost all of them would affirm the basic tenets of the Nashville Statement, at least in private.

Out of the most rapidly shrinking denominations, how many are liberal? Almost all of them. Which seminaries are bleeding the most, conservative or liberal? Take a guess. And how about major youth gatherings — yes, youth gatherings — for prayer, worship and teaching? Which events draw the biggest crowds? If you said “conservative,” you’d be right again.

In recent years, I’ve been invited to speak on the subject of “Can You Be Gay and Christian?” at:

And this represents a much larger pattern: The most thriving, growing churches in the world hold to conservative sexual ethics.

The Influence of the Religious Right “Has-Beens”

In contrast, churches like the once influential GracePointe in Franklin, Tennessee have seen a massive decline in numbers after embracing same-sex “marriage.” GracePointe lost as much as 80 percent of its membership in recent years.

What about national influence? Isn’t it interesting that this same, vilified “religious right” that was deemed dead just a few years back is the key group providing spiritual counsel to the president? And didn’t some of these religious “has-beens” help defeat pro-abortion candidate Hillary Clinton? And should I mention that a good number of the signers to the Nashville Statement can hardly be categorized as politically-affiliated members of “the religious right”? (It would take too long to demonstrate this now. But for anyone interested, the names are here.)

Mark Tooley puts things into a larger perspective. He notes:

Critics of the Nashville Statement should realize that about 95 percent of the world’s approximately 2.5 billion professed Christians are associated with branches of Christianity that share the Nashville Statement’s perspective. Of course not all are compliant with those teachings, and nobody complies completely, everyone relying on grace. But these teachings are the constant shelter under which the universal church rests.

Dissenting Christian institutions are almost entirely confined to declining Western liberal Protestant denominations. If the Nashville Statement’s critics were correct, these dying churches should be flourishing by their embrace of the spirit of the age. But in almost every culture and time, spiritual seekers are more drawn to religion that challenges, not that accommodates.

Of course, numbers alone prove nothing. But since progressives keep pointing to numbers, we should respond with truth. What if we measure other signs of spiritual vitality — prayer, study of Scripture, winning the lost, caring for the needy and investing in family? Here, too, we see that, around the globe, those who hold to the authority of the Word are reproducing.

I have no problem with leaders wishing that the Nashville Statement made reference to the many sins in our own camp, such as rampant divorce and pornography. Or that it confessed our past failings to reach out compassionately to those who identify as LGBT.

But the reality is this. If the religious left departs from the clear testimony of Scripture, it will lack the blessing of God. And to that extent it will fail to do the very thing it wants to do: namely, reach a hurt and dying world with the message of forgiveness and transformation.

Grace and truth cannot be separated without harming to one or the other.