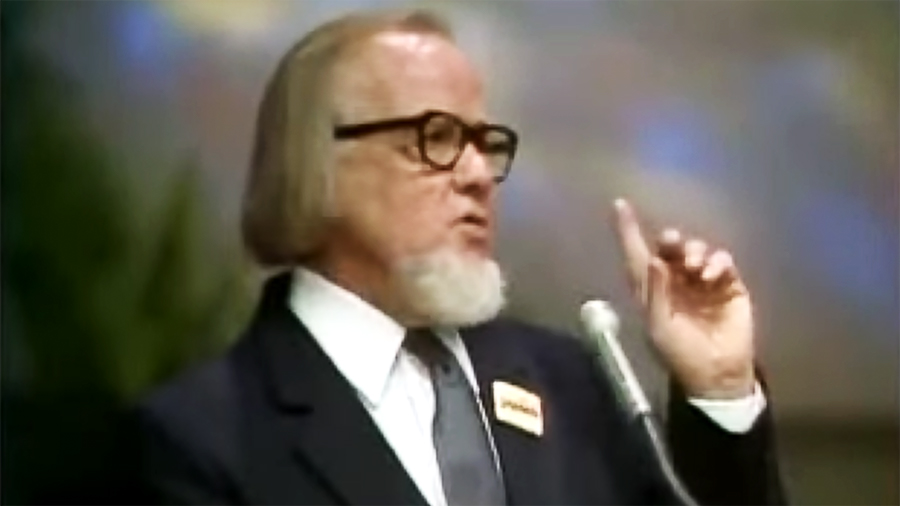 Francis A. Schaeffer (1912-1984) was a Christian theologian, philosopher and prophetic voice. While others were trying to decipher the handwriting on the wall, he was reading it clearly, often decades before his time.

Reading his words today is sobering, especially when many church leaders in the West continue to slumber on. Perhaps hearing him speak again will alarm us and awaken us?

Consider this insight from his book The God Who Is There, published in 1968.

He wrote, “But much modern homosexuality is an expression of the current denial of antithesis. It has led in this case to an obliteration of the distinction between man and woman. So the male and the female as complementary partners are finished.”

Yes, Schaeffer saw this 50 years ago, one year before the Stonewall Riots and the rise of the militant gay revolution, and long before the push for same-sex “marriage.”

He added, “It is imperative that Christians realize the conclusions which are being drawn as a result of the death of absolutes.”

How much more imperative is it that we realize this today, as society pushes hard to destroy the “gender binary” and as male-female distinctives are considered an enemy?

Already in Schaeffer’s day, there was a dangerous liberalism in some of the major denominations, including the United Presbyterian Church in the United States of America.

In his 1970 book The Church at the End of the Twentieth Century he noted that one of the problems “for those who did not leave the liberally controlled denominations is their natural tendency constantly to move back the line at which the final stand must be taken. … Can you imagine that these men [speaking of Presbyterian leaders like Donald G. Barnhouse and others] would have considered it a victory to have stalled the ordination of practicing homosexuals and lesbians?”

And note again the year of publication: 1970.

How much have conservative Christians within these denominations moved the line back since then? And how is it that these controversies are more than half a century old, and some of us are still not engaged in the battle? (Note also that you need to be fairly prophetic to write about “the end of the twentieth century” in the year 1970!)

In his book The Great Evangelical Disaster, published the last year of his life (1984), Schaeffer asked, “What does the future hold? What can we expect for ourselves, our congregations, our physical and spiritual children in the days ahead? America is moving at great speed toward a totally humanistic society and state. Do we suppose this trend will leave our own little projects, lives, and churches untouched?”

Sadly, many did suppose that this trend towards humanism would not affect “our own little projects, lives, and churches.” Now that we are in a pitched battle with the secular gods of the age, we have realized that our complacency is not only threatening our generation but also the generations to come. Is it too late to effect a positive change?

Even in 1984, long before the vast majority of Christian leaders were considering gay and lesbian issues, he asked, “When a San Francisco Orthodox Presbyterian congregation can be dragged into court for breaking the law against discrimination because it dismissed an avowed, practicing homosexual as an organist, can we be so deaf as not to hear all the warning bells?”

Yet in all his writings, there was compassion, recognizing the universality of human brokenness. And there was self-abasement rather than self-righteousness.

What is God saying today?

Speaking of “the Feminist Subversion” (in the same book, in 1984), he wrote, “There is one final area that I would mention where evangelicals have, with tragic results, accommodated to the world spirit of this age. This has to do with the whole area of marriage, family, sexual morality, feminism, homosexuality, and divorce. I bring these together as one topic because they are all directly related and indeed all are part of one of the most significant aspects of human existence.”

Do his words hit a bullseye in your own heart? Do they evoke a deep, “Oh my!” from your spirit? They certainly hit home within me as I read them, as I ask myself again, “What were we thinking?” And, even more pointedly, “What are we thinking?”

Then, listen to these words, from almost 35 years ago: “And there are others who call themselves evangelical and then affirm the acceptability of homosexuality and even the idea of homosexual ‘marriage.’”

And then these words, even more biting: “It is hard to imagine how far these things have gone. Evangelicalism is deeply infiltrated with the world spirit of our age when it comes to marriage and sexual morality.”

Now, read those sentences again, then ask yourself what Schaeffer would say were he alive today.

Better still, take out your Bible, get alone with God, and ask Him what He is saying today. In the midst of words of love and affirmation, prepare to be alarmed to the core. And I mean to the core.

Whatever you do, do not hit the snooze button. The time for slumber passed us a long time ago.