Don't rush too quickly to answer. Harrison is partly right on this one. (Partly.) 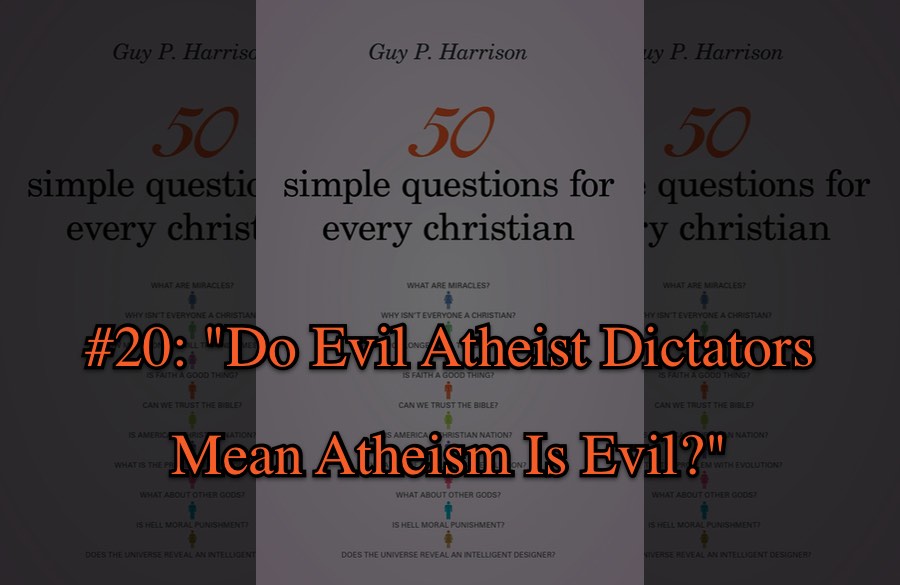 Here’s a favorite argument some Christians make: The 20th century’s evil atheist dictators, history’s worst mass murderers by far, show us that atheism is evil. Guy Harrison, atheist author of the book I’ve been answering this year, thinks that’s wrong. Really wrong. So wrong that no Christian should ever try that one again.

He’s right. He’s even right for some of the right reasons. It’s a bad argument, and Christians shouldn’t be using it to prove that point. We should use it to illustrate a different point instead — one that’s actually more in line with biblical belief.

Goofy and Off the Wall

I’m not going to spend much time disagreeing with Harrison this week. He says some goofy things in this chapter, but they’re so off the wall, they’re mostly harmless. He wonders, for example, whether Hitler might be in heaven because the Catholic Church never excommunicated him.

He’s not so crazy, though, when he says, “Regardless of whether or not they believe in a god, very bad people who have absolute power are prone to killing.” (Those are his italics there.) He’s very nearly right when he says you don’t have to be an atheist to be a bad person. “Doesn’t it seem appropriate,” he asks “to view this as more of a human problem than one that can be defined by the presence or absence of belief?”

Yes. It’s a human problem. Very much so. God calls it sin.

Atheism is Evil, But Not Because of Mao or Stalin

Atheism really is evil. I know, I know, they’ve got a standard atheist answer to that: “Atheism can’t be evil because atheism isn’t a thing. It’s a lack of a thing, a lack of believing in gods.”

Sure. And that’s almost a perfect match for the standard theological definition for “evil.” Evil isn’t a thing on its own, it’s the lack (the “privation”) of good, where good should be.

That’s how Christian thinkers understand the existence of evil, given that God couldn’t have created it. He only creates good. Evil isn’t a created thing at all, it’s an emptiness, an absence, a lack instead. Where humans should love, we lack love. Where we should practice justice, we don’t. We don’t just do nothing, though that’s bad in itself. Rather, we do things that are short on love, justice, and other virtues. That’s evil in action.

That’s just a bare introduction to a long topic, but it should be enough to make the point. Atheism is a lack of a good thing — not just of belief, but also of love and worship for our God. That’s all it takes for it to be evil.

Atheism Doesn’t Cause Evil Acts — So Why All the Atheist Dictators?

Here’s the problem with the argument we’re talking about here, though. It comes across as though Mao’s atheism, and Stalin’s, and Pol Pot’s, was what caused their murderousness. No, actually, Harrison is right on this. Atheism didn’t cause it. Being human did — especially, being human and having access to way too much power.

Still, there’s no denying that history’s worst killers by far have been atheists. Why is that, if atheism didn’t cause it? To answer that, we only need to take a quick look at the other question we ought to be asking. If being human plus having power equals murderous dictatorship, why isn’t every powerful person a killer? There must be something that stands in the way of it.

For many, that something is their upbringing. Or social pressure. Their moral habits. Fear of consequences. Take a Stalin or a Mao, though, and you’ve got someone who’s cast aside moral thinking, who doesn’t care about social pressures. They’re in charge! They can do what they want! There’s nothing and no one to stop them!

Is the answer coming into view now? Atheism didn’t make these men evil; it just let them believe there was nothing stopping them from it.

Harrison titles one section of this chapter, “How Many Would a Christian Stalin Have Killed?” He thinks that’s a sensible question, since he can point to “Christian” leaders in history who killed a lot of people. In some cases he gets his history wrong. In others he gets his idea of “Christian” wrong.

He’s a bit confused over the definition of “Christian”, but I think it’s safe to say that no one who’s actually following Jesus is going to become another Stalin. No one who listens to His teaching on loving one’s enemies would become a mass murderer. No one who cares about the Bible’s teachings on justice would, either.

It’s safe to say so, even though Harrison asks us to imagine these men being “driven not only by a lust for power and control but also by the need to fulfill some divine plan they sincerely believed in. Blending a popular religion such as Christianity with their agendas ….“

Okay, that’s far enough. No need to wait for him to finish his sentence. It doesn’t matter how he finishes it, he’s already describing something other than Christianity. Jesus doesn’t share kingship that way. Some bad people have thought they could do that, but that’s not Christianity.

And finally, Mao could be who Mao was only by believing he only had ultimate authority. The law was his to prescribe, he thought, and as for accountability, once you reach the top of the heap like he did, there was no one over him to hold him to account. No true believing Christian could possibly act as if that were so.

So let me put all this together. No, evil atheist tyrants don’t prove atheism is evil, but it still is anyway. And no, atheism doesn’t cause leaders to become mass murderers, but it does nothing to stand in the way of it, either. For leaders of that rank, only one thing will stop them: a genuine fear of God. Atheism opens the gates.

So yes, there’s a connection between these despots’ murders and their atheism. They’re human. And their atheism lets every rotten, vile human impulse flow free. God help us all.