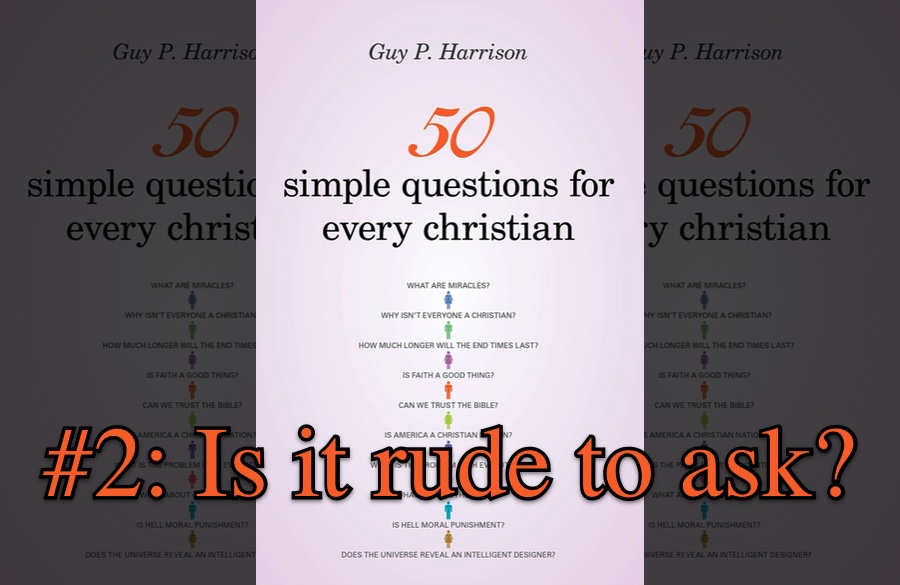 “Is it rude to ask?” That’s Guy P. Harrison’s second question in his book of 50 questions for every Christian. He means, is it rude to ask someone to explain his religious beliefs?

Some of Harrison’s 50 questions are almost too easy, but I’m committed to taking them all one at a time anyway. Is it rude to ask? Only if you ask rudely. Most evangelical believers are thrilled when someone asks them about their beliefs, if it’s a real question motivated by real interest.

Unfortunately that’s not the usual way questions come at us these days. Mocking and scorning are rampant online, where skeptics routinely dismiss Christians for believing in an “invisible magical sky fairy,” and lampoon religion with Pastafarianism. That’s rude. It’s also rude when you ask without bothering to listen to the answers, which Richard Dawkins and his followers have done in dozens of best-selling books.

Is It Rude to Ask a Politician?

Harrison is especially concerned about religion in public life. (It’s not a bad way to illustrate the issues.)

Imagine if a reporter followed up a president’s mention of scripture by asking his specific views on the Bible. Is it entirely and literally true? If not, then which parts are true and which parts are not, in the president’s judgment? … If a president says he “believes the Bible” or quotes from it regularly, then why can’t someone ask if he expects the apocalypse to occur as described in the Revelation?

So is it rude to ask a president about these kinds of things? That depends. Imagine a press conference where a reporter asks if he believes the Bible is literally true. How’s the president going to answer that? He could say “Yes,” and lose all control over the message that one-word answer sends. Reporters would splash the headlines with whatever they think that means: “President Believes Jesus is Coming Back Any Day Now.” Pundits would try to sort out whether the president wants to turn the U.S. into a theocracy.

Yes, If You’re Not Going to Pay Attention to the Answer

A short answer would open the door to all kinds of misrepresentation. What about a long presidential explanation instead?

I believe the Bible is entirely true and trustworthy in all that it affirms to be true. It does not affirm as true everything it presents, however. Additionally, parts of it are intended as figurative, so they’re not “literally” true in the usual sense of that word. Properly interpreting any of it, so we understand correctly what it’s affirming, requires careful attention to the entire historical and literary context. That much is true for any other written work, by the way, especially works that are intended as non-fiction, as everyone has always known and agreed, at least up until the advent of postmodern literary theory.

That’d never happen except in some fantasy world. And it wouldn’t do a lick of good. The headlines would still read, “President Believes Jesus is Coming Back Any Day Now;” the pundits would speculate on his theocratic intentions, and not a word of his real explanation would reach the public.

Harrison wants to know if it’s rude to ask politicians about their religion. The answer is yes, it’s rude if you have no intention of listening to the answer or reporting it accurately.

Rude or Not In Everyday Conversations

This isn’t only about presidents and press conferences, though. It’s about everyday conversations you or I might have. When someone challenges me about my faith, the first thing I want to know is whether he’s interested in hearing the answer, or if he’s trolling instead.

Next, if it’s a question I can’t answer quickly, I want to know how much time the asker has. If now isn’t the best time to talk it through, I’ll ask him when we can get coffee together or something. If I’m not fully prepared to answer, I’ll ask him to give me some time to get caught up on the question again. (Knowing there’s a good answer isn’t the same as being ready in the moment to explain it.)

So “Is it rude to ask?” It’s not rude unless the person makes it rude. It’s only rude when someone asks without intending to allow us to give such questions the kind of answers they deserve.