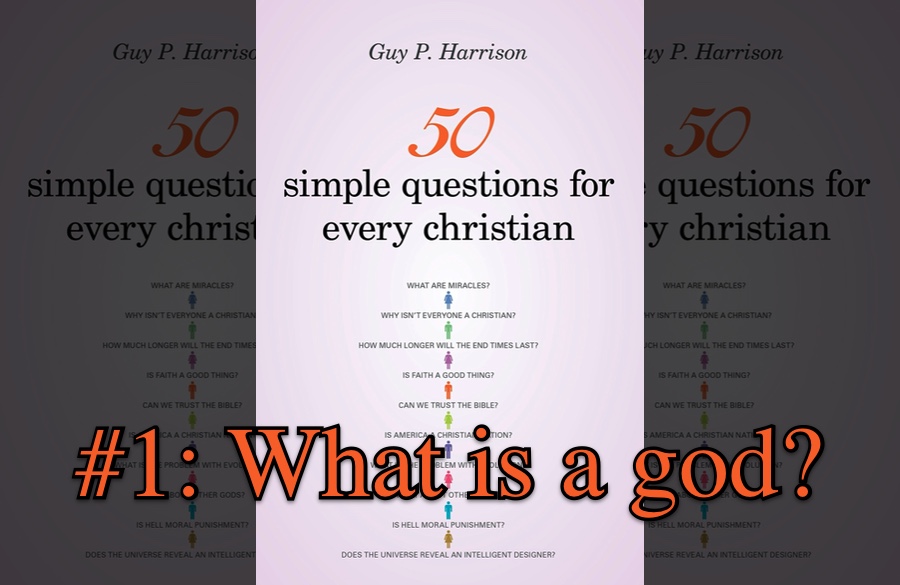 Skeptic Guy P. Harrison tells us that’s the “primary question” Christians must answer. I couldn’t agree less. But at least this chapter provides a great case study in how to approach skeptical questions about Christianity.

What makes it so important? Harrison say it’s because hardly anyone can answer it, first of all; and, “for better or worse, the concept of gods has had a profound impact on world history and continues to influence events today.”

That’s obvious enough. So again, I wonder, what makes the question so important? Harrison tries again, telling us most people can’t define the word god. “Most Christians perform terribly” with it, he says. We’re biased. We tend to think of our own God when we define the word, when (he reminds us) there have been millions of “gods” throughout history.

Sure. He’s right — depending on what you mean by “god.” Harrison is looking for one broad definition that covers them all. But he’s hiding crucial — and questionable — assumptions inside his question, which is what makes it such a great case study.

Here then is the lesson we’ll be heading toward as we proceed here: When people challenge you with a question, look underneath it for hidden assumptions.

This one contains a whopper: He makes the definition of “god” the primary question, the main thing, the starting point. That’s a serious miscue in a book titled 50 Simple Questions for Every Christian. When Christians talk about God, we’re distinctly not talking about gods. We have a definite meaning in mind when we use the word, and it’s just one God.

Harrison doesn’t want to start there, though, for some reason; he wants to make our God into one of many gods:

Set aside for the moment the challenge of whether or not this god or that god is real. Let’s consider what makes a god. Are they all supernatural? … Can a human become a god? Can a god become a human? … We have an idea who [Christians’] particular god is supposed to be… but he is just one of many millions of gods.

He makes the question of God’s existence the same as any other gods’ existence:

All the gods must be considered on an equal plane, as far as Harrison is concerned; and a mushy, foggy plane it is, based on his own definition: “A god is that which someone calls a god.”

So What’s Wrong With That Definition?

So is Harrison wrong to define “gods” this way? (Apart from the obvious error of using the word in its own definition, that is.) Yes and no. There’s good and bad in it.

Harrison says it’s wrong to describe our God and “call it a reasonable definition for gods. … “The biography of Yahweh/Jesus/Allah is not the definition of god.” I can’t disagree with that much. Our God is not one of the gods. He’s right there, but he goes way wrong when he tries to treat Him as if He were just one of the gang:

There have been many gods, according to their believers, who did not create the universe, the Earth, or life, and who were quite capable of dying. Again, who are we to say they were not gods if believers said they were?

Again, his broad definition works on one level; in fact, it’s not far off from one that Martin Luther gave in his Larger Catechism: “A god means that from which we are to expect all good and to which we are to take refuge in all distress, so that to have a God is nothing else than to trust and believe Him from the [whole] heart.”

But Harrison goes far wrong in calling this the “primary question,” adding, “this question ought to be considered the most important of all,” in a book of questions for Christians.

There’s very little point in starting a book for Christians by talking about gods Yes, we have a place for the gods in our vocabulary, as Martin Luther himself shows. But aren’t we’re really concerned about God Himself, the God of the Bible, the One revealed especially in Jesus Christ?

If our God is real, He is uniquely real. The other gods are nothing but vain products of deceitful human imagination. Sure, we can talk about them, as we do sometimes. But they’re way down the list of what counts as important — especially in comparison to the God whom we worship. The “gods” can never be primary unless God Himself is not supreme. So by making “gods” the primary question, Harrison quietly slips in his own anti-Christian assumptions.

How Wrong Is It?

Harrison’s definition for gods is so broad it could mean almost anything, and it’s self-referentially malformed to boot. But let’s give him a break: The word really is hard to define, if you’re looking for something that covers every possibly usage. His greater error is in the way he employs that definition. In fact, he’d have been equally wrong if he’d put Luther’s far better definition to use in the same way.

For he does what Luther could never have dreamed of in his wildest nightmares: Not only does he treat the definition of gods as the main question, he presents his definition as the best there is, the one we ought to rely on. By doing that, he subtly steers the discussion toward his own biased conception: that “gods” are the product of human imagination. That they’re all on equal footing there. That the Christian God is one of many gods.

What He Should Have Asked Instead

Do you see the misdirection there? He’s pointing the discussion toward gods, when the question that matters is God. Who is this God, in whom Christians believe? What is He like? Instead of what makes him the same as all the gods, what makes Him different? All of which leads toward the two great questions, What is reality ultimately like, with this God at the heart of it all, and why should people believe in Him?

If there’s one thing I could wish for online religious debate in particular, it’s that Christians would answer less quickly and with more discernment regarding the assumptions beneath the questions skeptics throw at us.

The question he asks here — and his discussion following it — isn’t so much wrong as it is irrelevant. So my best answer to this first chapter’s question is, “What on earth are you asking that for? Why talk about gods? Why not talk about God as Christians understand Him? Shouldn’t we at least start there, and then come back later (if we wish) to the far less interesting and important question of the gods?”

If Harrison had asked, “What do Christians believe about God?” I’d have gladly answered. He didn’t, so I won’t. (Thankfully his later questions tend to get better than this one.)

The Lesson In This Case Study

There’s a broader lesson here, one that Jesus also exemplified. It may come as a surprise if you haven’t noticed it before, but Jesus didn’t answer every question, or even take every one of them seriously. My favorite example is Mark 11:27-33, where instead of answering the Pharisees’ question, he exposed the political hypocrisy motivating it.

It’s okay to question premises. It’s okay not to answer questions based on errant assumptions. Jesus didn’t, after all. In fact, if there’s one thing I could wish for online religious debate in particular, it’s that Christians would answer less quickly and with greater discernment regarding the assumptions beneath the questions skeptics throw at us.

It’s not just for online discussion, of course. Whether in person or in print, listen carefully to skeptics’ questions. Discern what they’re asking overtly, and what they’re implying covertly. Decide whether the question they’ve posed is the right one to answer, or whether you need to ask a question of your own, to unmask their hidden assumptions. And if in the end their question isn’t worth answering, don’t.