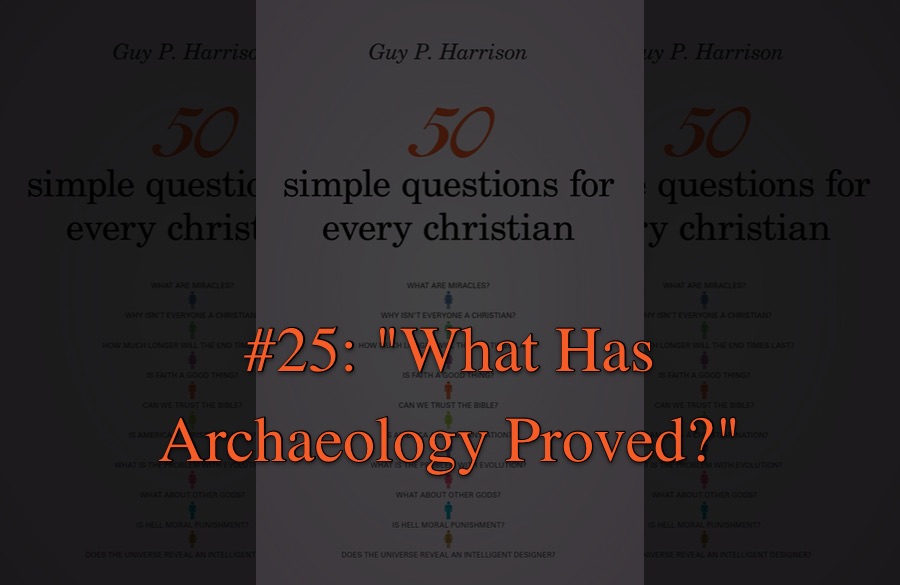 Guy P. Harrison asks Christians, “what has archaeology proved?” I ask, what does his chapter on this prove? Only that it’s possible to bury straw man arguments in just about any pile of dirt you care to stick a shovel in.

A “straw man” is defined as a weak, distorted version of an opponent’s position. You build up the straw man, knock it down, and then declare yourself the winner. I wouldn’t do it myself. Too boring. Why waste time disproving what no one believes in the first place?

Yet people still do it. The trick isn’t in disproving the other person’s beliefs, it’s in getting other people thinking that the straw man is what your opponent actually believes. It’s about producing a successful lie.

If that sounds harsh, don’t blame me. Harrison gets almost weepy proclaiming his fondness for archaeology in this chapter, which makes it hard to believe that some of the mistakes I’m about to detail come from pure honest ignorance on his part. He’s misrepresenting Christians. It looks very much as if he’s doing it on purpose — which would make it a lie.

What Is Biblical Archaeology?

Let’s begin with his view of biblical archaeology. The name itself “rings alarm bells in the skeptic’s mind,” says Harrison, because “one can’t force the artifacts to conform to a religion.” Already he’s starting to gather his straw and stuff it into the scarecrow shirt. He even asks whether “a typical Christian would be incline to trust the work of a ‘Scientology archaeology.’”

Part of building a straw man is ignoring your opponent’s real position. Harrison does that repeatedly in this chapter.

But no one who knows the field even slightly thinks it’s about hammering artifacts into (pardon the oxymoron) a biblical Procrustean bed. It’s just exploring biblically-defined regions, guided by biblical data. The explorations need not assume that data is true, although in case after case after case, it’s turned out to be. (Here are two quick sources you can refer to.)

Would I trust the work of a Scientology archaeologist? Why not, if she knew how to lead a dig, and if she let others examine her artifacts and her inferences? But the comparison is a straw man. Harrison knows no one will ever find anything by following Scientology’s “data.” There’s plenty to find by following the Bible’s information.

Yet there’s a “crucial point that too many people miss,” he says. “Finding evidence of people who lived thousands of years ago in the Middle East is not the same as finding evidence of God, miracles, angels, and demons.”

Well, slap me up the side of the head and call me an idiot. And all these years I’ve thought we had video of Elijah’s victory on Mount Carmel. And goodness me, I had no idea they’d never dug up a real angel’s bones!

What misdirection! What deceit! No thinking believer says archaeology is direct evidence of the supernatural. It can be evidence of the Bible’s accuracy, though, as we’ll see after we yank the straw off one more misrepresentation.

Do the Dead Sea Scrolls “Prove Nothing About the Existence of a God”?

Harrison says there’s “nothing magical” about the Dead Sea Scrolls, even though they are (smell the condescension, folks) “important, no doubt, precious to many millions of people.” They prove nothing more about the existence of a god than the museums and artifacts of Rome and Athens prove that Jupiter, Zeus, or Athena were real, he says. Later on he adds that he “routinely” tells people, “The Dead Sea Scrolls prove only that ancient people could write.”

That word “magical”? It’s (ironically) misdirection. It’s a straw man. No one invests the scrolls with any special power. And no one thinks they prove the existence of a god. That’s a straw man, too.

But we do believe they prove something relevant to God’s existence. They give strong supporting the textual accuracy of the Old Testament. It’s not proof that the Scriptures have been preserved unaltered, but it does demonstrate ten centuries of extraordinary care in keeping the text pure.

Harrison must know that. It’s fact number one in just about every list of important biblical finds. If he doesn’t know it, then he’s lying about how much archaeology he knows. More likely, though, he knows it and he’s misrepresenting it. That makes it a lie, too. Just a different one, that’s all.

Can Archaeology Find Anything Interesting At All About Christianity?

He goes on to say that Christianity’s real importance comes from its claims about the supernatural. If it were just a story about a Jewish people and a Jewish preacher, “it wouldn’t be a big deal.” Obviously he hadn’t read my book Too Good to be False, which explains how the story is a big deal even if you set the miracles aside. That’s okay, I hadn’t written it yet.

Except that part of my book isn’t so new. Christians have long taught that ours is a story-based religion. Not all of that story is supernatural; in fact, miracles were prominent in it only a few times since creation (during the periods of Moses and Joshua, of Elijah and Elisha, and the Gospels and Acts).

Harrison supposes we think archaeology proves the supernatural somehow. That’s a straw man. We do hold, however, that if archaeology proved the story wrong — including its non-supernatural parts — it would prove our religion wrong, or would at least badly shake up our understanding of it.

Harrison doesn’t take that the least bit seriously. Part of building a straw man is ignoring your opponent’s real position. He does that repeatedly in this chapter.

The italics in the heading are Harrison’s, not mine. Just so you can hear him sneering. Harrison says the search for Noah’s Ark “proves … that biblical archaeology is overrun with amateurs, some of whom lie.”

Sure, I can believe there are amateurs out there searching for Noah’s Ark. Recently I saw someone claiming he’d invented a perpetual motion machine. Does that mean the whole field of physics is overrun with amateurs?

He closes the chapter with, “Nobody likes to be misled or lied to, even if it feels good for a fleeting moment. On this point, I think most Christians will agree.”

I’d like to see more evidence that he agrees, too.