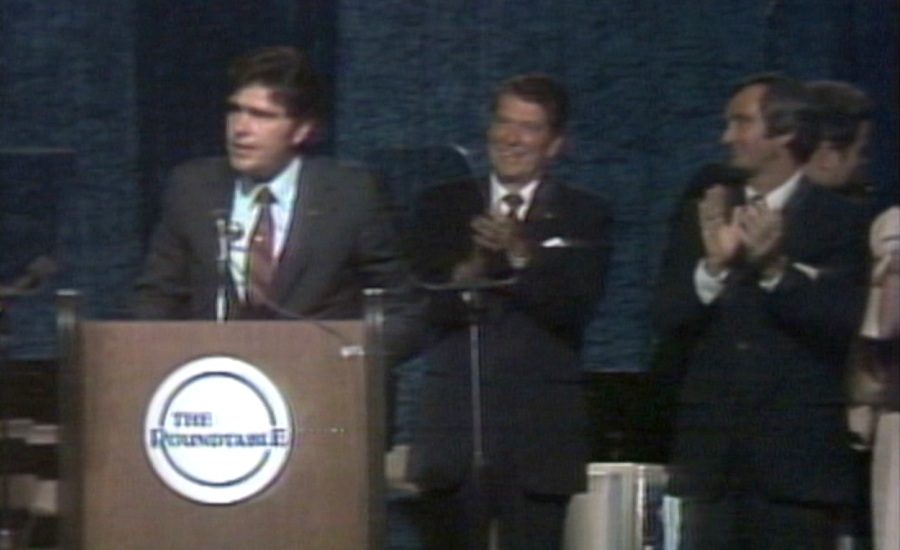 Two elections separated by 40 years. Two pivotal moments in American history. Two times when the nation was faced with the choice between freedom’s blessings and the slavery of socialism. In 1980, America chose freedom by electing Ronald Reagan. But Reagan likely would not have been elected had it not been for a history-changing prayer meeting called by Billy Graham and a miraculous night in Dallas 40 years ago this weekend: The National Affairs Briefing.

America in 1980 was in a sorry state. We were not ill with a virus, we were suffering from what President Jimmy Carter called a “malaise.” The economy was as stagnant as a Texas summer. The national spirit was as dreary as a Seattle winter. A feeble U.S. was helpless as Iran held 52 of our diplomats and citizens hostage. And the Soviet Union was spreading its communist poison in soil all over the world. The United States was not prepared to stop it.

Reverend Billy Graham was in Red Square in Moscow when he heard a word from the Lord. He shared it with Stream founder James Robison. “I know I’ve heard God say without course correction we have only 1,000 days of freedom,” Robison recalls Graham saying. “The Soviet threat is going to take freedom down in the United States and around the world.” America basically had just three short years to turn the tide.

Graham called a prayer meeting with 8 to 10 faith leaders. Among them: Robison, Pat Robertson, Charles Stanley, Adrian Rogers, Jimmy Draper and Bill Bright. Two days of fervent prayer. Bright shared a startling message. He, too, had been in Red Square. And he, too, had been given the exact same message from God that America had 1,000 days of freedom left, unless it changed course. America, according to both Graham and Bright, needed strong, principled leadership that could communicate effectively necessary changes and direction.

Sparked by the prayer, and led by God, Robison received from the Lord the vision for the “National Affairs Briefing.”

On the second day of the two-day event, August 22, 1980, some 17,000 people gathered at the Dallas Reunion Arena. 17,000 people of faith who understood the importance of protecting freedom’s matchless blessings. Robison had invited all three presidential candidates to appear: President Jimmy Carter, the Southern Baptist Sunday school teacher; Independent John Anderson; and a once-divorced Hollywood actor from California named Ronald Reagan. Only Reagan accepted the invitation. 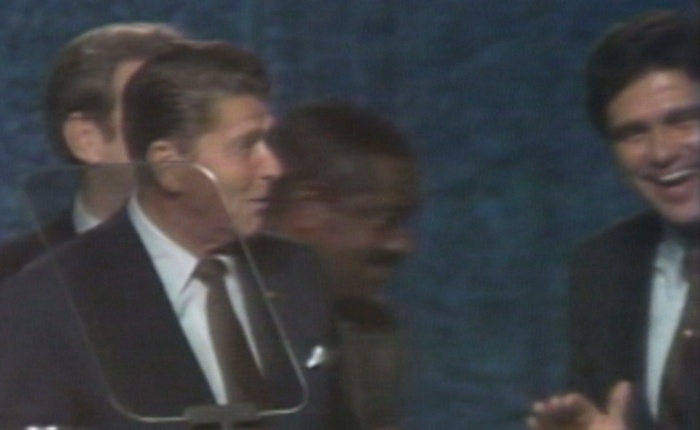 Reagan’s entire team was against him going, with the exception of Jerry Naylor, his National Director of Special Events. Despite the campaign’s reluctance, Naylor told The Stream, Reagan insisted. “When he believed something was right, he would not waver.”

Robison began his remarks thanking the former California governor for having the courage to come. He quoted Proverbs 29:2: “When the righteous are in authority the people rejoice, but when the wicked beareth rule, the people mourn.” As Gov. Reagan sat on the platform, Robison delivered an arena-shaking message that is as timely today as it was in 1980.

There is no possible way to separate God from government and have a successful government. God is the ultimate authority. I tire of the constant reference to Christians and religious people and the term ‘separation of church and state,’ implying that if you belong to a church or if you claim faith in God and believe in God you are to have no basic integral part in political activity or policy making.

If the righteous, the pro-family, the moral, the biblical, the godly, the hardworking and the decent individuals in this country stay out of politics, who on earth does that leave to make the policies under which you and I live and struggle to survive?”

He held up the Bible.

There is marvelous healing in this book, and it needs to be applied to the cancerous, visible sores that embarrass us before the whole world right now.

If you think our solution is political, you too have been deceived. Don’t you commit yourself to some political party or politician. You commit yourself to the principles of God and demand those parties and politicians align themselves with the eternal values in this book. And America will forever be the greatest nation on this earth. 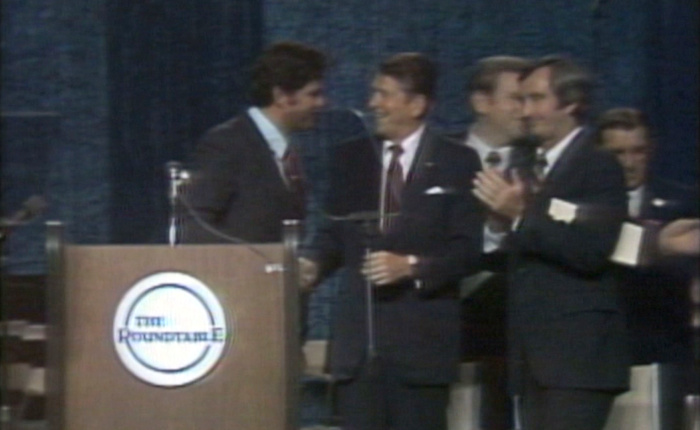 Ronald Reagan joined the 17,000 in standing to their feet as Robison finished. Then he spoke, offering a now-historic opening line suggested to him by Robison.

“I know this is a non-partisan gathering, and so I know you cannot endorse me. But I only brought that up because I want you to know, I endorse you, and what you are doing.” That opening line was front-page headlines nationwide the next day. The pendulum swung toward Reagan almost immediately.

The Impact Personal and Political

Both Robison and Naylor speak of the presence of God at that meeting. The effect on Reagan was both personal and political, Naylor said.

I knew that Gov. Reagan and Nancy were a church-going couple, but we had never really discussed spiritual issues. After the briefing, I saw it. After so many years with him, I saw a new man! I saw a brightness in his eyes and in his heart. His life changed that night.

The mutual embrace that night of evangelical Christians and Ronald Reagan paid immediate political dividends. “Not only was there an upswing in the polls after the briefing,” Naylor recalls, “but our financial support took a huge leap forward, both in major and, for the first time, many smaller donations.”

Come November, Ronald Reagan defeated incumbent Jimmy Carter in large part because evangelical voters had been ignited by the National Affairs Briefing. They turned away from the Southern Baptist Sunday school teacher for the candidate willing to fight for our freedoms. Willing to stand up to the Soviet threat. The candidate who understood, as Robison said that momentous night, that “government is not our provider. It is a protector, not a producer.” Reagan’s victory ensured freedom in the United States of America would last far beyond 1,000 days.

Forty years ago this weekend, history was changed by the power of God, the power of prayer and Christians along with hard working, freedom-loving Americans taking a stand. Today, Christians again must take a stand, must pray and must call on the power of God to heal our nation and extend freedom’s blessings.

This week at the Democratic National Convention we saw a socialist who honeymooned in the Soviet Union celebrate how the Democrats have moved to his positions. We saw socialist policies trumpeted loud enough to raise the Politburo dead. We saw the governor of New York refer to a “European” virus, rather than concede COVID-19 came from Communist China. We saw the Marxist Black Lives Matter rioters give a sidewinding kick to the head of an innocent citizen. We saw more police and innocents injured by what the former First Lady called “peaceful protesters.” We saw, if only for a brief moment, the face of the American left, Alexandria Ocasio-Cortez, whose political guru pushes a deadly mix of Marxism and Fascism.

With cities already burning, and socialism at the doorstep of the White House, we face, as we did in 1980, a choice: America rising to be a shining city on a hill, or America falling to ashes. However, unlike 1980, we do not have 1,000 days left.

WATCH AND LISTEN to Gov. Ronald Reagan’s message at the National Affairs Briefing, which helped him win the 1980 election.

Please Hear My Heart, and I Pray Our Father’s Heart