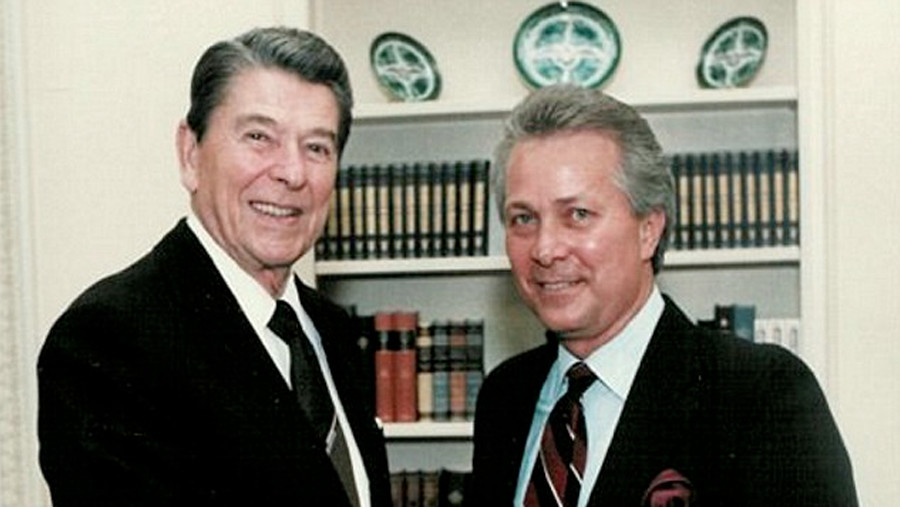 Christian leaders are scheduled to meet with Donald Trump in New York on Tuesday. In light of this gathering, I wanted to share a conversation I recently had with Jerry Naylor, a close friend of Ronald Reagan and the National Director of Special Events for Reagan’s 1980 presidential campaign, a position that gave Naylor a front-row seat to Reagan’s fateful encounter with evangelical leaders that year.

In 1985, Reagan made Naylor a federal commissioner on the National Commission for Employment Policy, where Naylor served two, three-year terms. Naylor also is one of the fathers of Rockabilly music and was a lead singer for The Crickets after Buddy Holly died in a plane crash in 1959.

Please pray that what happens at the New York meeting Tuesday will have a positive effect on the nation, much as the prayer meeting described below did a generation ago.

James: Jerry, I know you’ve had some health issues. How are you?

Jerry: I’m nearly blind (all but about 10% of my vision is gone), but I’m still singing, and I’m working on a gospel album.

I have been thinking of you for months, James. Pamela and I just celebrated our 50th anniversary. I was telling her, “I’ve got to call James. I’ve got to call James.” The presidential campaign is different from anything we’ve ever had. I’ve wanted to call you because you were the man who helped us — I mean really did. You helped give us the opportunity to see Ronald Reagan elected president in 1980. I have so much respect for you and Betty.

James: It’s for freedom Christ made us free. Freedom blesses the just and the unjust. We are in a fierce battle in many ways for the soul of our nation, for freedom and our families.

I would like to ask you to share what you witnessed as part of the Reagan team. You told me several times you believed it was an answer to prayer and the support of Christians that put Reagan in the White House. I shared with you back then that the prayer meeting Billy Graham called, with the help of Campus Crusade president Bill Bright, Adrian Rogers, Charles Stanley, Pat Robertson, myself and others — prayed together for two days — and I had the opportunity to share with Reagan their impressions during that prayer meeting. Billy called the prayer meeting because he believed we only had 1,000 days of freedom — basically, three years — or the Soviet Union would destroy our freedom. He heard that standing in Red Square in Moscow. A few months later, Bill Bright in the same place heard the same thing in his Spirit. You indicated that the message concerning that prayer meeting moved Gov. Reagan to then share with all of his team, and he would, in fact, run. It was settled.

Is that how you remember it?

Jerry: Yes, and this reminds me of a small book Gov. Reagan gave me called The Law by Frédéric Bastiat that was first published as an article in France in 1850. It says very simply that socialism cripples a country.

Fast forward to today. Pres. Obama, Hillary Clinton and Bernie Sanders are trying to move us toward a socialist government. What we must do is keep our focus on these very important parts of liberty and our Constitution. With liberty we acknowledge that we are following God and His Word. Without this, we know freedom can be taken away from us.

James: I believe we saw freedom saved, the collapse of the Soviet Union and the Berlin Wall come down, and the effect of the extremely high taxation to amazingly low, and “trickle down economics” overflowed until the bigger impact of all that came in the years that followed, even in the Clinton years because of what Pres. Reagan put in motion.

Jerry: That is exactly right.

James: Let me bring up an event many considered the turning point. It was the National Affairs Briefing in Dallas when Mr. Reagan said, “I know this a bipartisan gathering, and so I know you can’t endorse me. But I only brought it up because I want you to know I endorse you and what you are doing.” This was a gathering God put on my heart, and I was able to share it with Gov. Reagan. He immediately signed on, even without the total support of many of his advisors.

Jerry: You are right about that. When he believed something was right, he would not waver.

James: There appeared to be a visible momentum shift after that gathering of God-loving, freedom-loving Americans. The polls revealed a steady rise right up to the election.

Jerry: Not only was there an upswing in the polls after the briefing, but our financial support took a huge leap forward, both in major and smaller donations.

James: Were you at the briefing that night? Did you sense the Spirit of God there?

Jerry: Yes, I was there as an eyewitness and sensed God’s presence. I knew that Gov. Reagan and Nancy were a church-going couple, but we had never really discussed spiritual issues. After the briefing, I saw it. After so many years with him, I saw a new man! I saw a brightness in his eyes and in his heart. His life changed that night.

James: He told me that the next day, he’d never been at anything like that and he endorsed that spirit and unity. Nancy told me she had never seen Ron so excited about a meeting. But I want to know and hear what you saw. We agreed it was not only in momentum and support, but also in his personal commitment. Like he was more determined to really hear from God. Is that right?

Jerry: You could see it, and you could feel it. It was electrical. It was like he was sharing it. Like the Holy Spirit had found a home, and it stayed with him. We could talk the rest of the day on different incidents in the campaign where it just flowed out and he was very confident, and yet he was thankful. He prayed many, many prayers before he did anything. I believe strongly that’s what happened to change our nation in that period of time, and I think we can see it again.

James: That’s what it’s going to take this time: the prayers of God’s people coming together in unity while supporting and praying for the right person to lead the right way. Whoever wins must be able to lead people to the table of reason and have meaningful, civil discussions. Whoever it is must hear and heed the wisdom and counsel that comes from God.

Jerry: Absolutely and very soon. After the person is chosen, I think it would be sinful if Christians weren’t all on their knees, seeking God, praying for the nation, for the best candidate and for all who run for political office, locally and nationally. We need another miracle like we witnessed in 1980.

James: It’s obvious that the nation, the general population, is fed up with political correctness and what they call the government political establishment. Right now the anger at the establishment is understandable and, in many ways, justifiable. Would you agree with that?

Jerry: I do. It also seems like there is a bit of fear — like everything is out of control. From a security point of view, Ronald Reagan had a wonderful way of dealing with national threats. It was no accident those who had been hostage in Iran were released the morning he put his hand on the Bible and was sworn in. The enemies of freedom knew there was a new sheriff in town. After the Berlin Wall came down, a friend went into East Germany while he was writing a book. He found some files from the KGB, brought them home and rushed them to me. There was a file on President Reagan, and on the first page was a picture of Reagan in that cowboy hat, and that firm look. It was in three languages: Spanish, German and Russian. We had it translated, and it said, “Do not think you can overlook this man. He will shoot before he talks.”

James: Wow! He represented strength, courage and compassion. There were some often referred to as “the Establishment,” or perhaps what Sen. Cruz called the “Washington Cartel,” and I have often referred to those who hindered positive progress the “Republican Guard.” You well recall that Mike Deaver and others close to Gov. Reagan not only did not want him to come to the National Affairs Briefing, but in his speech at the Brandenburg Gate in Berlin, some of them did not want him to say, “Mr. Gorbachev, tear down this wall.” But he said it anyway, didn’t he?

Jerry: He absolutely did. He had unshakable strength.

James: Mike Deaver became a Christian, and we became good friends during the last years of his life. He told me on numerous occasions that many in the Establishment, including himself, prevented Reagan from receiving wise counsel consistently from deeply spiritual, freedom-loving Christians. Mr. Deaver counseled, comforted and prayed with me several times during Pres. George W. Bush’s second term. Jerry, how would you suggest Christians pray now for the political conventions and the election?

Jerry: We need to pray for those who receive their party’s nomination and ask God to lead us as we choose and those elected as they lead. We are in a battle to protect freedom and liberty, and we must keep it and respect it. For eight years Obama has tried to take our Constitution apart.

James: I believe racial tension has intensified, great animosity persists, citizens are filled with rage and discontent. The stage is set for the next great awakening, or we’ll witness the catastrophic consequences of forsaking God. Do you believe what happened in the Reagan years to preserve freedom would not have happened had it not been for the prayers and active participation of Christians and those who love God and his Word?

Jerry: Absolutely! Thank God I was able to be there to see it happen and then follow it through.

Heal our land, Lord. We want to be part of it. We’re on our knees before You. Lord, I pray in this day we will see another great awakening and You will heal our nation.

Why Socialism is Not Biblical: A Pastor’s View