Yelp: 60% of Business Closed During Pandemic Will Never Reopen

Restaurants, bars, health-beauty and retail are among the sectors hardest hit, a new Yelp report shows. 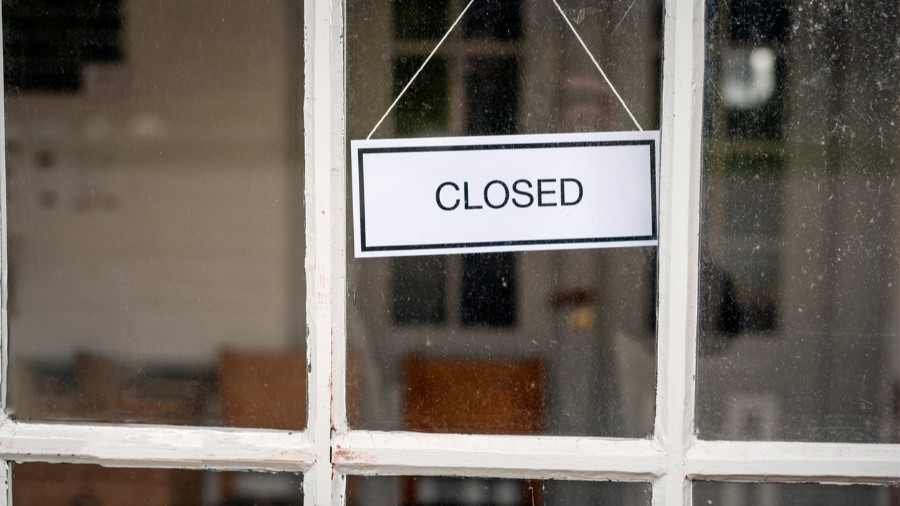 A new economic impact report from Yelp shows that a majority of businesses on the platform that closed during the COVID-19 pandemic will not be reopening.

Data show a total of 163,735 businesses on Yelp closed between March 1 and August 31, when state-enforced lockdowns across the U.S. began forcing businesses to close their doors. According to Yelp’s figures, 97,966 of those businesses (60 percent) will not be reopening.

“Overall, Yelp’s data shows that business closures have continued to rise with a 34% increase in permanent closures since our last report in mid-July,” Justin Norman, vice president of data science at Yelp, told CNBC.

The closures have not impacted all sectors of the economy equally, however. Yelp’s report shows that some professions — lawyers, architects, accountants, physicians, and real estate agents — have been able to weather the pandemic storm more effectively, representing just two to three businesses closed per thousand.

A new Yelp report says that 60% of 163,735 businesses closed on its platform will never open again.

Here's a look at the business sectors that have been most affected (the ones in red). pic.twitter.com/lGmYLOr5kp

Demand for some local services has also remained high. Auto service providers, plumbers and independent contractors have closed at higher rates than doctors and lawyers — representing six to seven business closures out of every thousand — but far lower than the five business sectors hit hardest: restaurants, bars, retail, fitness and the beauty industry.

Here are highlights from the report:

Restaurants — particularly Mexican restaurants, breakfast and brunch joints, burger and sandwich shops and dessert places — continue to get pounded by lockdowns. A total of 32,109 restaurants on Yelp had closed as of the end of August, 19,590 of which were permanent (61 percent).

Places that offer foods conducive for delivery have fared a little better, including coffee shops and bakeries, delis, food trucks and pizza joints.

Bars and nightlife, an industry six times smaller than restaurants, have suffered an especially high closure rate. As of August 31, there were 6,451 business closures on Yelp, 3,499 of which were permanent (54 percent).

“The share of permanent closures within bars and nightlife have increased by 10% since our Economic Average Report in July,” the report said.

Shopping and retail businesses followed close behind restaurants in total closures, with 30,374, 58 percent of which are permanent (17,503).

“Both men’s and women’s clothing, as well as home decor, have the highest rate of business closures,” the report found.

The Beauty and Fitness Industries

Small businesses, which comprise the bulk of Yelp’s business revenue, have suffered tremendously under the lockdowns. Meanwhile, big businesses not typically found on Yelp have fared much better. Indeed, many have benefited from the response to the pandemic.

While we’ve heard phrases like “in this together” and “we’re all in the same boat” throughout the pandemic, the reality is Americans didn’t suffer through lockdowns equally. Some have been destroyed by forced closures while others have benefited from them.

It turns out lockdowns were not just inhumane;
they were deeply unjust.

Stock guru and TV personality Jim Cramer wasn’t wrong when he observed this summer that the pandemic resulted in “one of the greatest wealth transfers in history.” Cramer noticed that while small businesses were “dropping like flies,” corporations were growing stronger and their stock prices were swelling.

Data bear out these claims.

Greg Buzek, the founder and President of IHL Group, wrote that smaller retailers saw about a quarter of a trillion dollars shift to large retailers during the first three months of the pandemic.

“IHL estimates that over $250 billion alone shifted from smaller retailers (with 50 or fewer locations) to larger retailers due to lockdowns in North America alone, forcing over 285,000 small businesses out of business,” Buzek wrote.

This confirms what Dan Sanchez and I wrote in June: America’s small businesses have been horribly abused throughout this pandemic. Through no fault of their own, many small business owners saw their dreams go up in smoke as bigger retailers and online stores thrived. What’s perhaps worse is that for months they were told to be quiet while their basic freedom — the ability to earn a living — was violated.

Meanwhile corporate America grew fat. Companies like Target set new sales records as their market share swelled from the sidelined competition, and a flood of capital flowed to the largest corporations, which appeared to be the safest havens for investors’ cash. As Peter R. Orszag of Bloomberg News observed, it was the corporate version of the Matthew effect: The strong got stronger.

Meanwhile, as they were benefiting from the pandemic, corporate America inundated us with a steady stream of pro-lockdown mass messaging, played to (obligatory) somber piano and containing predictable phrases — “rise above,” “stay apart,” “we’re in this together.”

Catchphrases cannot mask the reality that economic lockdowns made inequality in America much worse. Tens of millions of Americans lost jobs and millions of businesses were closed or forced to the brink of closure.

The solution to the problem, we were told, was Washington, D.C. Trillions of dollars were pumped into the economy by the Federal Reserve to finance bailouts and send checks to Americans. The bailouts were a huge success — for the rich. Six months into the pandemic, Wall Street keeps setting new records.

It turns out lockdowns were not just inhumane; they were deeply unjust.

The Lingering Effects of Lockdowns

It would be easy to look at the stock market and think America has weathered the pandemic fine. This would be a mistake.

There is a concept in economics known as regime uncertainty. Coined by Robert Higgs, the term describes “a pervasive lack of confidence among investors in their ability to foresee the extent to which future government actions will alter their private-property rights.”

Capital investment — whether by an entrepreneur starting a hardware store or a venture capital group investing a sum in a business — is the source of wealth creation. But people are less likely to invest their capital in places their property rights are insecure.

Higgs argues that one of the reasons the Great Depression lasted so long was regime uncertainty. Depression-era Americans did not have much faith that Franklin Roosevelt would secure their rights of property. FDR, after all, tried to pass a 100 percent tax rate via executive order. That lends itself to a high degree of uncertainty.

Uncertainty can range from erratic tax rates to regulatory barriers to outright property confiscation. While some uncertainties are more harmful than others, few would argue that unilateral state-enforced lockdowns inject a high degree of uncertainty into the American economy. It’s not just the fact that businesses were shut down, it was also in the nature of the shutdowns, which were often arbitrary, unfairly applied and quickly became indefinite in nature. “Fifteen days to slow the spread” quickly changed to “We’ll let you know when it’s safe to open.”

Fortunately, the checks and balances embedded in the American system may help return a degree of economic certainty that has been lost in 2020.

A federal court recently ruled that Pennsylvania’s economic lockdown was unconstitutional, noting that an economy is not “a machine that can be shut down and restarted at will by government. It is an organic system made up of free people each pursuing their dreams.”

Even in an emergency, the authority of government is not unfettered. The liberties protected by the Constitution are not fair-weather freedoms — in place when times are good but able to be cast aside in times of trouble. There is no question that this country has faced, and will face, emergencies of every sort. But the solution to a national crisis can never be permitted to supersede the commitment to individual liberty that stands as the foundation of the American experiment. The Constitution cannot accept the concept of a ‘new normal’ where the basic liberties of the people can be subordinated to open-ended emergency mitigation measures.

The court’s ruling comes too late to save the 97,966 businesses on Yelp that will never open again after closing during the COVID-19 pandemic. But it could offer protection to the businesses of tomorrow — and return a degree of certainty to an economy that needs it.