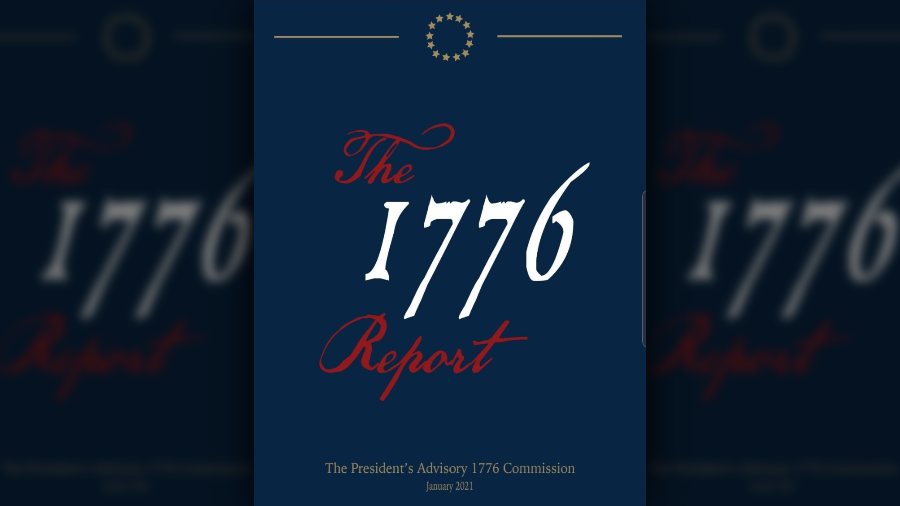 One of the last things outgoing-President Trump did was to sign an executive order on the 1776 Commission. It is geared toward teaching American school children about America’s true source of greatness.

Yet one of the first things incoming-President Biden did was to sign an executive order nullifying Trump’s 1776 initiative.

After Biden’s action — on his first day in office, as if this were a high priority — the 1776 Commission responded with a joint statement from its chairman, Dr. Larry P. Arnn, the president of Hillsdale College; prominent conservative African-American scholar Dr. Carol Swain, retired professor of Vanderbilt Law School; and Dr. Matthew Spalding, the vice president and dean of the school of government of Hillsdale’s D.C. campus. They wrote,

The 1776 Report calls for a return to the unifying ideals stated in the Declaration of Independence. It quotes the greatest Americans, black and white, men and women, in devotion to these ideals. The Commission may be abolished, but these principles and our history cannot be. We will all continue to work together to teach and to defend them.

The 1776 Report the Commission released observes:

The declared purpose of the President’s Advisory 1776 Commission is to ‘enable a rising generation to understand the history and principles of the founding of the United States in 1776 and to strive to form a more perfect Union.’ This requires a restoration of American education, which can only be grounded on a history of those principles that is ‘accurate, honest, unifying, inspiring, and ennobling.’

Critique of the 1776 Commission

Meanwhile, a group of historians condemns the 1776 Commission as being simplistic and misleading:

The report actually consists of two main themes. One is an homage to the Founding Fathers, a simplistic interpretation that relies on falsehoods, inaccuracies, omissions, and misleading statements. The other is a screed against a half-century of historical scholarship, presented largely as a series of caricatures, using single examples (most notably the ‘1619 Project’) to represent broader historiographical trends.

I asked the aforementioned Dr. Carol Swain about this critique of the 1776 Commission. She told me,

They misunderstood the purpose of the Commission. We were not writing for academic scholars. It was never meant to be a comprehensive history report. We did want to address that part of today’s public debate as exemplified by the 1619 Project.

The 1619 Project of the New York Times postulates that America’s real birth date was 1619 when the first African slaves came to these shores. Sadly, the 1619 Project is now being disseminated in many of our schools, thus, leading more young Americans to disparage our nation’s history.

But slavery was not unique to America — 700,000 men dying in a national conflict that ended slavery is unique.

The War on History

What is America? In its essence, it is self-governance under God. Our Constitution is predicated on the Declaration of Independence, which mentions God four times. In effect, our founders declared their independence from England and their dependence upon God. As JFK put it, our founders declared, “The rights of man come not from the generosity of the state but from the hand of God.”

Jarrett Stepman of the Heritage Foundation wrote an entire book on the conflict over teaching the past, entitled, The War On History. He told me,

I think there’s been a long-term push, especially in education, not just the K-12 level but certainly from higher education, to basically turn around Americans and make them think that, ‘Well not only is our past unexceptional, it’s exceptionally bad.’ And I think that that narrative is so big in society now.

We’re not a perfect country, as human beings are certainly not perfect. But this country has done a lot of great things. … I think there are, unfortunately, a very powerful group of activists in this country, a lot of people in academia and higher education, who want to change that, who want to make Americans feel like their country is built on something terrible.

I am of the persuasion that God did something unique in politics and world governance in the creation of the United States. Yes, slavery and mistreatment of the Native-Americans were there almost from the beginning. But these were in violation of the promise of America. They happened despite the promise of America, not because of it. And it was that promise that leaders like Abraham Lincoln and Martin Luther King appealed to in abolishing those injustices. History matters a great deal.

If You Plan Not to Vote for Either Trump or Biden, Here Are 10 Reasons to Reconsider