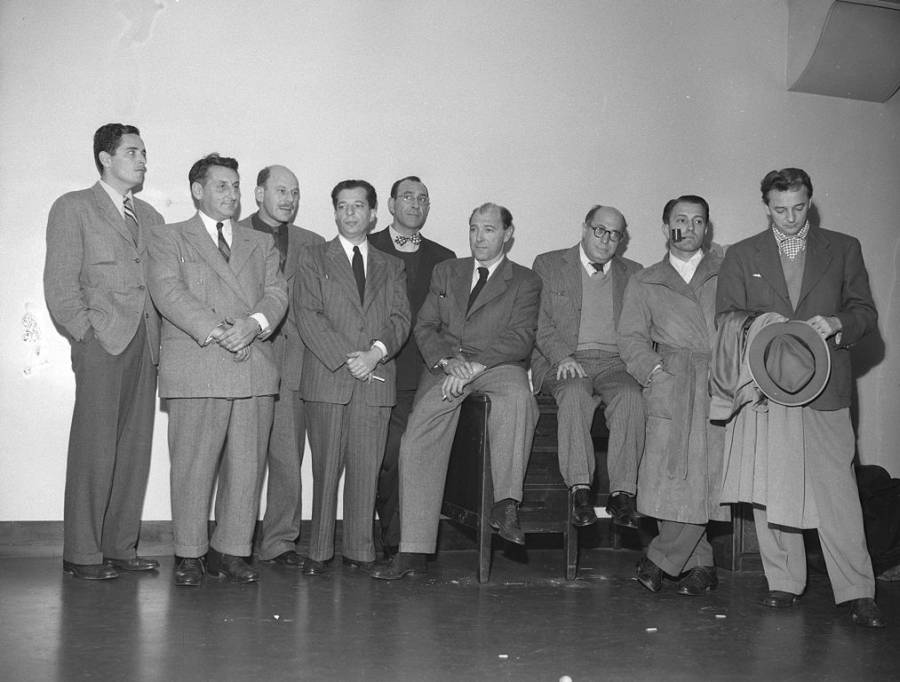 Will history repeat itself? Nine of the so-called Hollywood Ten. Movie industry figures held in contempt of Congress and blacklisted for alleged communist sympathies.

In a new Instagram post, Will & Grace star Eric McCormack seemingly backtracked from his earlier call to blacklist those who attend a President Trump fundraiser in Beverly Hills. Key word being “seemingly.”

I guarantee not a single Republican or Trump supporter in Hollywood takes his latest statement seriously. (Though most would admire the craftmanship of McCormack’s PR people.) Meanwhile, Whoopi Goldberg understood exactly what McCormack had called for, and she was not happy.

To refresh, in perfect Woke Supremacist form, McCormack tweeted last week: “Hey, @THR, kindly report on everyone attending this event, so the rest of us can be clear about who we don’t want to work with. THX.” His spot-on impersonation of Sen. Joseph McCarthy was Emmy worthy.

Hey, @THR, kindly report on everyone attending this event, so the rest of us can be clear about who we don’t wanna work with. Thx. https://t.co/7W3xPG3bI2

His Will & Grace co-star Debra Messing, quickly followed suit. “Please print a list of all attendees,” she tweeted, “The public has a right to know.”

The backlash against the duo’s tweets has been intense. (Though, tellingly not loudly in Hollywood itself.) And now comes McCormack’s new statement.

“I want to be clear about my social media post from last week, which has been misinterpreted in a very upsetting way,” McCormack began his Instagram post. “I absolutely do not support blacklists or discrimination of any kind, as anyone who knows me would attest. I’d simply like to understand where Trump’s major donations are coming from, which is a matter of public record.”

How do I know he’d still use whatever power he had to block, ostracize, deny opportunity to, any Trump supporter who crossed his path?  Because he calls the reaction to his clear call for blacklisting as being “misinterpreted.” His original words were very clear. (Perhaps his next role can be playing Peter “I Can Smell the Deplorables” Strzok.)

McCormack closes by saying “I am holding myself responsible for making educated and informed [decisions] that I can morally and ethically stand by and to to that, transparency is essential.”

What’s that mean? It means “I need to know who the Trump supporters are so I can fulfill my ‘moral and ethical duty’ to avoid working with them and hamper their career.” Put another way, “So I can be discriminate.” He is proposing that he is not calling for the industry to issue a formal blacklist. Just information that “the rest of us” — the non-Trump supporters — can act upon individually. Wink-wink. Nudge-nudge.

He’d make clear that he welcomes Trump supporters as cast and crew on any shows he himself produces. We see none of that.

He’d make clear that he rejects any producer, director, casting director who locks out a Republican or Trump supporter so as to avoid offending “the star.”

Even after his statement, imagine you’re a casting director for Will & Grace. A nice recurring role is being cast. You’ve narrowed the choice down to three people. Your assistant does a quick social media search and discovers Candidate A has retweeted a few Trump tweets. Are you passing that name on or just the other two? We all know the answer.

Ask Whoopi Goldberg. She knows what this crowd is up to.

Whoopi Lays Down a Whipping

On Tuesday’s The View, Whoopi Goldberg demonstrated why she is a national treasure. Goldberg took McCormack and Messing to task. No, she took them over her knee and slapped their snobbish, Woke Supremacist behinds.

“Don’t encourage people to print out lists,” she thundered, “because the next list will have your name on it and people will be coming after you.” Then Whoopi really got going.

We had something called the blacklist, and a lot of really good people were accused of stuff. Nobody cared whether it was true or not. They were accused. And they lost their right to work.

She urged the duo to “remember what the blacklist actually meant to people and don’t encourage anyone — anyone to do it.”

“Last time people did this, people ended up killing themselves.”

We’ll see if Whoopi faces backlash for not being Woke enough for the Woke Supremacists.

An unsung hero is actress Betty Hutton. A  year earlier, she insisted blacklisted composer Jerry Fielding be hired as the musical director for her new CBS TV show. (Fitting that the woman who played Annie Oakley in Annie Get Your Gun would to stick to her guns.)

It would be nice to see, but I have little hope the Hollywood actors union SAG-AFTRA would make as much effort to assist conservative performers as they do every other type of minority and special interest in town. In all the years of my wife getting emails from SAG I never saw one workshop or seminar or notice of action that involved the support of or action in defense of conservative actors. Seminars for one-armed transgender little people of color, sure. But conservatives or Christians, nope. Not that I remember. Still, one can pray for change.

Of course, another way is for Trump supporters and all who support free speech and diverse thought to figuratively storm the gates of Hollywood. Come out of the shadows and change the script.

Further still, work together on their own projects. Take the lead. Hollywood’s single-mindedness, as seen with McCormack and Messing, is poisoning their own soil.

Plant in fresh soil, and watch what grows.

When Actresses Attack, Part One: Will & Grace Star Shows No Grace