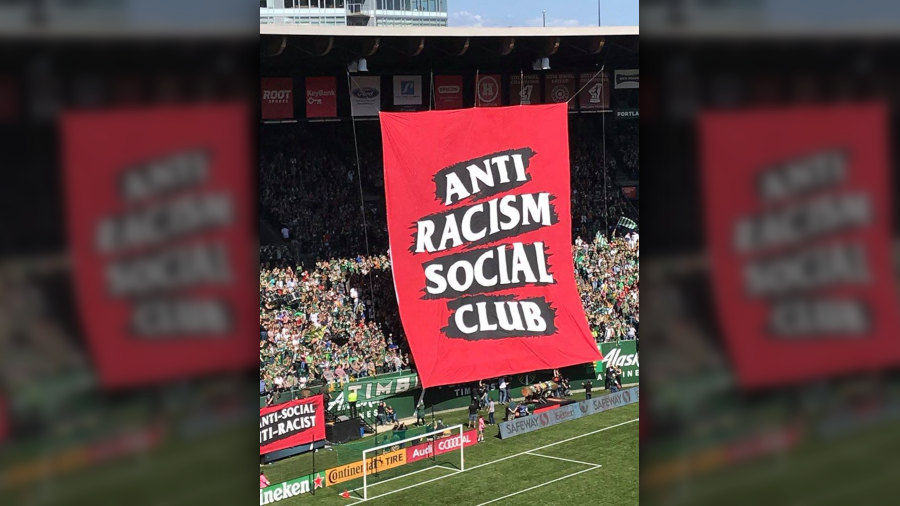 If you watch Major League Soccer’s championship game, the MLS Cup, between the Seattle Sounders and Toronto FC on Sunday, you might see the Sounders’ fans displaying flags and signs with a unique emblem. It shows three arrows pointing down and toward the left inside a circle.

The emblem represents the Iron Front, a militant group formed by Germany’s Social Democratic Party during the 1930s. The three arrows symbolized opposition to Nazism, Marxism and monarchism. Antifa groups in the United States use the image in their demonstrations against “racism” and “fascism.”

#AUnitedFront The iron front flag was displayed without incident in 2018 as well pic.twitter.com/CTnwRKXE3K

The three arrows came into MLS through the Timbers Army, the main fan organization for the Portland Timbers, the Sounders’ biggest rivals. The two cities are among the most left-wing in the nation. The Sounders’ counterpart, the Emerald City Supporters, followed suit to accompany the motto, “Anti-Racist. Anti-Fascist. Always Seattle.” Racist. Anti-Fascist. Always Seattle.”

Since Antifa uses the image, MLS this year banned “political, threatening, abusive, insulting, offensive language and/or gestures, which includes racist, homophobic, xenophobic, sexist or otherwise inappropriate language or behavior.” Violators would be banned from home games and would have to apply in writing for readmission after 6-to-12 months.

“Our stadiums are not environments where our fans should be expressing political views because you then are automatically opening yourself up to allowing counter-views,” MLS Commissioner Don Garber told ESPN. “Then we’re getting into a situation which is unmanageable and really not why the vast, vast majority of fans go to games.”

Where Did Their Love of Soccer Go?

In July, the Sounders’ management formally warned the Emerald City Supporters about flying the Iron Front’s flag in a home game against the Timbers. When the teams met again in Portland on Aug. 23, fans for both squads staged a dramatic protest.

The Emerald City Supporters and the Timbers Army are among MLS’s most enthusiastic groups. For the game’s first 33 minutes, however, both sets of fans went silent. The 33 minutes represented 1933, the year Adolf Hitler came to power and banned the original Iron Front. Once the 33 minutes ended, fans cheered and chanted with abandon. The Timbers Army then began singing “Bella Ciao,” an anti-fascist anthem sung by Italian partisans during World War II.

But eight days later, MLS suspended members of the Timbers Army for flying the flag during a home game. On Sept. 15, the Emerald City Supporters staged a walkout during another game when the team ejected the group’s leader for waving the flag. But on Sept. 24, MLS backed down and abandoned its policy for the playoffs.

Those Who Dissent Fear Backlash

One member of the Emerald City Supporters expressed disgust.

“I never thought they would put their politics in front of the team itself,” Mike McDonnell told the Seattle Times. “You’re a supporters group. You’re not supposed to be a political group.”

Another long-time member told the Times he would cut ties with the group. The Times‘ Matt Calkins wrote: “‘It’s just not constructive,’ said Tim, who still has many friends in the ECS, but thinks ‘groupthink’ has overcome its leaders. ‘That doesn’t belong in a stadium.'”

Tim asked that his last name not be published “because he fears potential backlash,” Calkins wrote. “He has seen what can happen to critics of self-described anti-fascists, and he’d rather not take the risk.”

Calkins experienced his own backlash on Twitter. One user accused him of “crying tears for racists.” Another called him “the times (sic) most racist columnist.” A third described him as “Mr. I love Nazis.”

Ironically, the fans and the activists they support behave just like the side they claim to oppose. They use “racist” and “fascist” in the way the Nazis used “Bolshevik” and “Jew,” as epithets designed to intimidate and justify violence.

Troy Storfjell, another member of the Emerald City Brigade, reflects that attitude. A college professor, Storfjell defended what he called “violence against fascists” like Andy Ngo, a gay Asian reporter. On June 29, Ngo was documenting Antifa’s counter-protest in Portland when he was assaulted.

Antifa’s members punched Ngo, kicked him in the head and threw so-called milkshakes laced with quick-drying cement at him. Ngo was treated at a hospital for a brain hemorrhage. Legal action is pending.

“If one fascist gets a milkshake thrown at him … and beaten up, I don’t have a problem with it,” Storfjell said.

Storfjell’s comments, plus the backlash that Calkins experienced — and that Tim fears — make you wonder who the real fascists are.