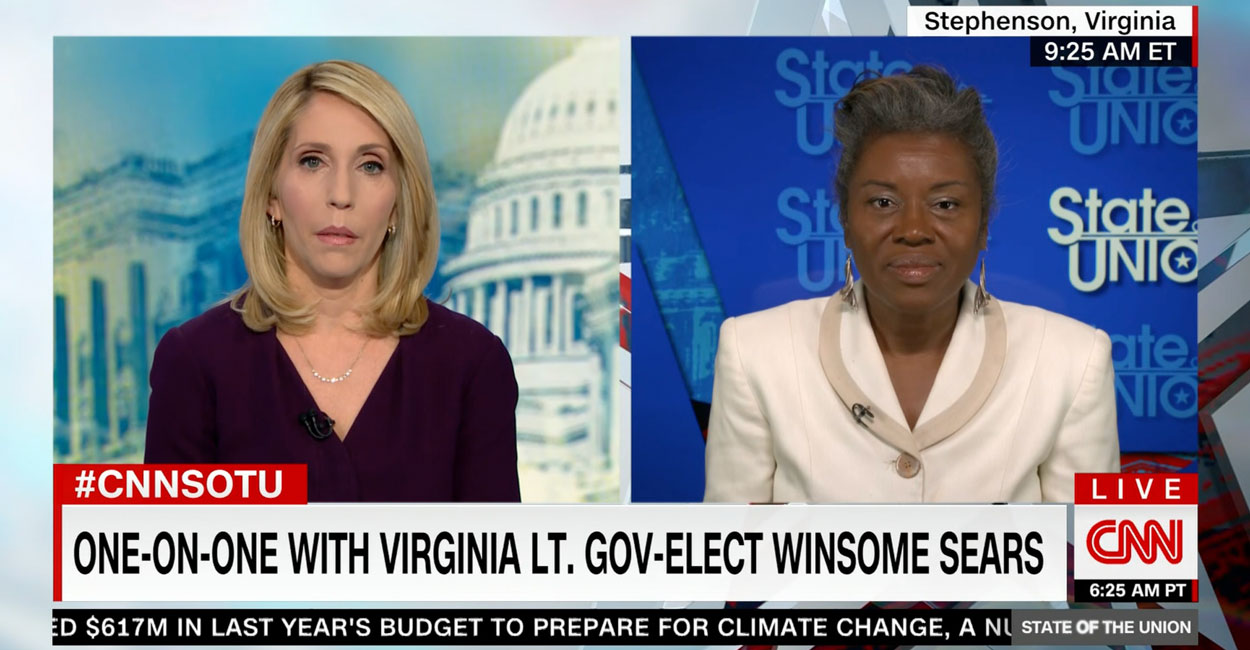 Virginia Lt. Gov.-elect Winsome Sears refused to disclose her vaccination status to CNN's Dana Bash during a Sunday interview on State of the Union.

A day after CNN accused Virginia Lt. Gov.-elect Winsome Sears of spreading “falsehoods and misconceptions” about COVID-19, she hit back at the corporate media giant Monday.

“It doesn’t matter what I say if I’m not of the same political persuasion as whoever is asking the question on the other side,” Sears told TV host Armstrong Williams on WJLA-TV, the ABC affiliate in Washington, D.C.

“They have a certain mindset and that’s what they want to hear,” she said. “And if they don’t hear it, you’re a radical and you’re not worthy to be listened to and your views don’t matter.”

The controversy stemmed from Sears’ Sunday appearance with CNN’s Dana Bash on State of the Union. After asking Sears about her opposition to vaccine mandates, Bash pressed Sears to reveal her own vaccination status. Sears refused to say.

In response to Williams’ question Monday, Sears shared her views on the COVID-19 vaccines and natural immunity.

Sunday’s interview wasn’t the first time Sears clashed with CNN about her vaccination status. In October, she accused the network of “trying to carry the water” for the Democrat ticket in Virginia. Sears defeated Hala Ayala, a Virginia delegate, on Nov. 2.

I encourage everyone to get the vaccine but no one should be forced to disclose their vaccination status, especially not to liberal hack reporters at CNN. The media is trying to carry the water for the failing McAuliffe-Ayala ticket and it won’t work. https://t.co/z8HY6YE1Co

Sears was joined Monday on The Armstrong Williams Show by Dr. Ben Carson, a world-renowned neurosurgeon. Carson, who had COVID-19 in November 2020 while serving in the Trump administration, said society shouldn’t dismiss natural immunity as a falsehood.

“We’ve known for hundreds of years the importance of natural immunity,” Carson said. “Now all of the sudden, ‘Natural immunity, what is that?’ That’s the federal government’s response to it, even though it’s considerably more effective than vaccinations.”

When we start creating policies that have no resemblance to things that make sense, we get a lot of confusion, we get a lot of resistance. People are being painted as bad people because they won’t get a vaccine. I think people would be happy to get a vaccine if you were honest with them, if you leveled with them, and you allowed them to make that decision with their health care provider.”

At another point in the interview with Williams, Sears referenced another CNN reporter’s coverage of the August 2020 riots in Kenosha, Wisconsin. CNN’s Omar Jimenez was reporting live as an inferno blazed in the background, yet CNN’s own caption read: “FIERY BUT MOSTLY PEACEFUL PROTESTS AFTER POLICE SHOOTING.”

Sears criticized the media for attempting to hide the truth from Americans.

“There’s a movement afoot to destroy America in some form or fashion,” Sears said. “And unfortunately, the media, which should be helping to root out this behavior, is telling us that, for example, we don’t see what we see.”

Williams covered a range of issues on Monday’s program, including education, gun rights, and Jan. 6 riot at the U.S. Capitol. The full show is below.