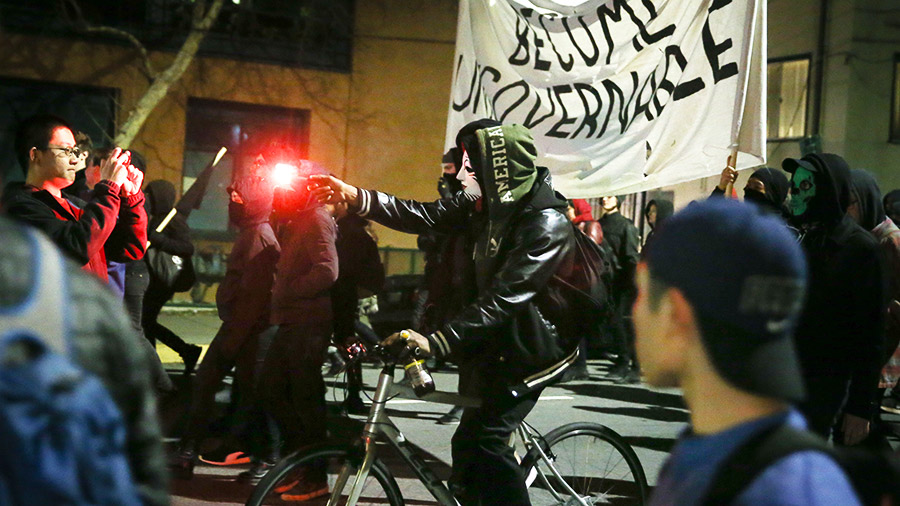 In a recent column, I made the case that Americans are fighting the Second Civil War. The deep chasm that has opened up between the left — not liberals, the left — and the rest of the country is so wide and so unbridgeable that there is no other way to describe what is happening. But I noted that at least thus far, unlike the First Civil War, this war is not violent.

Unfortunately, there is now reason to believe that violence is coming. In fact, it’s already here. But as of now, it’s only coming from one direction.

Violence — From the Left

Left-wing thugs engage in violence and threats of violence with utter impunity. They shut down speakers at colleges; block highways, bridges and airport terminals; take over college buildings and offices; occupy state capitals; and terrorize individuals at their homes.

In order to understand why more violence may be coming, it is essential to understand that left-wing mobs are almost never stopped, arrested or punished. Colleges do nothing to stop them, and civil authorities do nothing to stop them on campuses or anywhere else. Police are reduced to spectators as they watch left-wing gangs loot stores, smash business and car windows, and even take over state capitals (as in Madison, Wisconsin).

Today, authorities in what we once proudly proclaimed the “Land of the Free and Home of the Brave” are intimidated to the point of paralysis.

It’s beginning to dawn on many Americans that mayors, police chiefs and college presidents have no interest in stopping this violence. Left-wing officials sympathize with the lawbreakers, and the police, who rarely sympathize with thugs of any ideology, are ordered to do nothing by emasculated police chiefs.

Consequently, given the abdication by all these authorities of their role to protect the public, some members of the public will inevitably decide that they will protect themselves and others.

This ability of the left to get away with violence is one of the gravest threats to American society in its modern history. Since the Civil War, I can think of only two comparable eruptions of mob violence that authorities allowed. One was when white mobs lynched blacks. The other was the rioting by blacks, such as the Los Angeles riots 25 years ago, and the recent riots in Ferguson, Missouri, and Baltimore, Maryland.

Today, authorities in what we once proudly proclaimed the “Land of the Free and Home of the Brave” are intimidated to the point of paralysis.

And exactly what do they fear? Not violence — they have made peace with left-wing violence. What they fear is the left-wing media. If the Black Lives Matter movement is forcefully prevented from blocking tens of thousands of cars from entering or leaving San Francisco, the police and local authorities will be labeled racist by black leaders, a smear that will then be echoed by The New York Times and rest of the left-wing media.

The ability of the left to get away with violence is one of the gravest threats to American society in its modern history.

Likewise, if a college president requests enough police to come to a college campus so that a Heather Mac Donald, a Charles Murray or an Ann Coulter can deliver a lecture, some of the student-gangsters engaged in violence might be injured — and that college president will then be pilloried by the mainstream media.

Furthermore, left-wing violence doesn’t only succeed where it takes place. It succeeds where nothing happens. The left can now shut down places and events just by threatening violence. This is what happened last week in Portland, Oregon. One leftist called in a threat to the 82nd Avenue of Roses Parade, saying that the Republican Party contingent marching in the parade would be beaten up. The business leaders organizing the parade canceled the whole event for the first time in its 10-year history. If they’d had any reason to believe that the police would have adequately protected the marchers in left-wing Portland, one assumes (hopes?) that they would not have canceled the parade.

An email sent to parade organizers perfectly summed up the left’s dominance of America through violence. It said, “You have seen how much power we have downtown and that the police cannot stop us from shutting down roads so please consider your decision wisely.”

Meanwhile, the press lies about alleged white supremacists in President Trump’s administration and an alleged massive surge in anti-Semitism in order to do what the left has done since Lenin: blame others while it alone organizes violence.

So, here’s a prediction: If college presidents, mayors and police chiefs won’t stop left-wing mobs, other Americans will. I hope this doesn’t happen, because electing conservative Republicans and not donating money to colleges will be more effective. But it is almost inevitable.

Then the left-wing media — the mainstream media — will enter hysteria mode with reports that “right-wing fascists” are violently attacking America.

And that’s when mayors and college presidents will finally order in the police.

Dennis Prager’s latest book, The Ten Commandments: Still the Best Moral Code, was published by Regnery. He is a nationally syndicated radio show host and creator of PragerUniversity.com.