Evidence suggests the disparity in unemployment stems in large part from the different ways states are approaching the coronavirus. 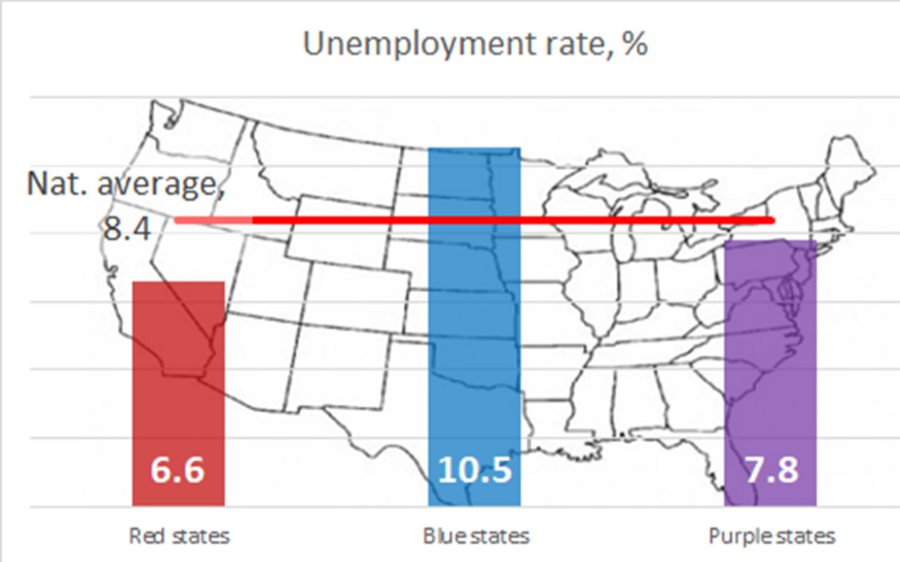 Nations across the world are still reeling from the COVID-19 pandemic, which triggered a global recession following economic lockdowns enforced by most developed nations around the world.

New estimates put the economic losses at more than $16 trillion, and the United States saw its GDP shrink 9.5 percent between April and June, its largest drop in modern times.

While macroeconomic data is useful, it doesn’t tell the full story. It’s important to understand these economic losses have resulted in severe pain for people around the world, especially the poor.

A new Columbia University study shows that 8 million Americans have slipped into poverty since May, the New York Times reports. Meanwhile, a recent World Bank study projects as many as 150 million people around the world are projected to slip into extreme poverty by 2021.

As the U.S. seeks to rebound from the global recession, it’s worth noting that some states are having more success than others.

Economic Pain is Not Distributed Equally

Just the News recently published a breakdown of state unemployment data for August (the latest data available). Based on U.S. Bureau of Labor Statistics data, the figures showed that nationally the unemployment rate was 8.4 percent, but the economic pain was not distributed equally across blue, red and purple states.

In red states (those voting Republican for president in all four of the last four elections), the combined unemployment rate stood at 6.6%. Among blue states (those that voted Democrat in all four of the last four presidential elections) the figure was 10.5%. Among purple states (all of the others, either split 2 and 2 or 3 wins for one party and one win for the other), the unemployment figure was 7.8%.

Different Approaches Lead to a Disparity in Outcomes

Evidence suggests the disparity stems in large part from the different ways states are approaching the coronavirus. Red states, particularly ones like South Dakota, Utah, Oklahoma and Idaho, have been much less inclined to restrict economic freedom during the pandemic. Blue states, on the other hand, have been the most proactive in limiting economic activity in an attempt to limit the spread of the virus. This includes states such as California, New Jersey, Rhode Island, New York and Connecticut.

One might argue that these states could have had high unemployment rates before the pandemic, but BLS data from earlier this year show this is not the case.

The 5 states with the highest unemployment as of Aug 2020:

*States with most #COVID19 restrictions

The Cost of Curtailing Economic Freedom is High

While it’s unclear if these regulations are having a positive effect — New Jersey and New York have the highest COVID-19 death tolls in the country, and Rhode Island and Connecticut are not far behind — the consequences of government imposed lockdowns have been abundantly clear for months.

“The most recent unemployment data are one part of a larger economic picture that shows, so far, red states are doing a better job of balancing the need to save both lives and livelihoods,” said Rachel Greszler, an economist for the Heritage Foundation.

“[W]e’ve seen blue states using a pandemic as an opportunity to expand government control, impose excessive lockdowns not rooted in data, favor politically connected groups and allies and demand federal bailouts for decades of poor budgeting instead of taking responsibility and confronting their problems head-on,” Greszler told the Washington Examiner.

As lawmakers in America and around the world continue the difficult work of trying to limit the spread of the virus without causing further destruction, we should remember that the cost of curtailing economic freedom is high.

‘We’re All in This Together’: A Therapist Talks Fear, Depression and Anxiety During Coronavirus