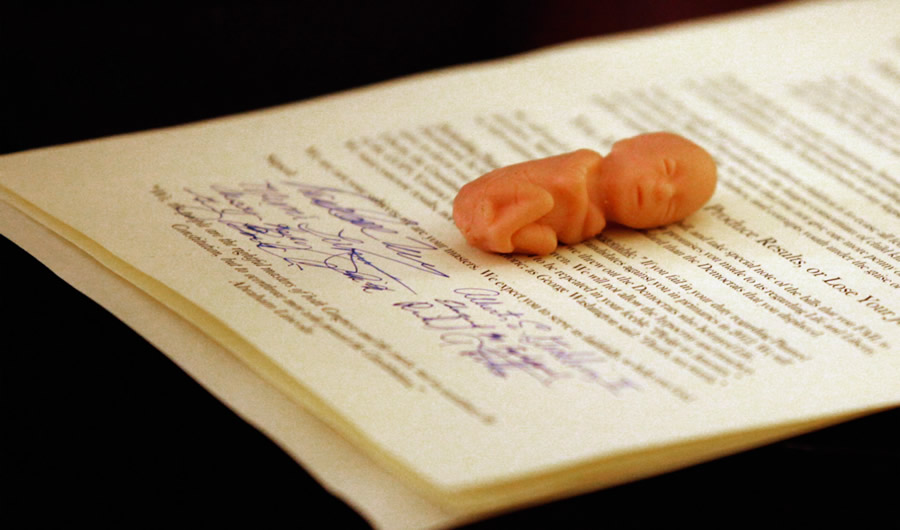 The recent controversy at the meeting of U.S. Catholic bishops mirrors tensions across the Christian world. They even reach into evangelical churches. At The American Spectator, George Neumayr notes that Catholic bishops divided over the centrality of defending unborn life. That’s the topic Pope

Francis’s lobby within the USCCB worked hard to try and deemphasize in Baltimore. Bishop Robert McElroy of San Diego, whom Francis is likely to promote, argued that abortion is not the “preeminent” issue facing the world.

The ghost of Cardinal Bernardin — who was the first to push the idea that abortion is “just one of many” life issues — haunted the conference in more ways than one. His so-called “seamless garment” still hides the heresies of many bishops. Almost a third of the bishops supported the seamless garment-style motion that McElroy represented. Archbishop Charles Chaput of Philadelphia, who is retiring and may see his seat filled by McElroy (he is on the short list for Philadelphia), took issue with McElroy’s comment, for which he received applause.

Pope Francis’s self-appointed champions, Bishop McElroy and Cardinal Blase Cupich, have already shown us how much to trust them. Read this crackpot manifesto organized and signed by McElroy. Among many other fevered demands, it calls on every U.S. Catholic parish to hide illegal aliens. And this op-ed by Cupich. It equates Planned Parenthood’s sale of baby parts with executing criminals, limiting Medicaid spending, and protecting Americans’ gun rights.

The good news? The U.S. bishops “voted 143-69 against including a full quote by Pope Francis in their document on citizenship that downplayed the issue,” as LifeSiteNews reports. Still, the final vote is staggering to imagine. One U.S. Catholic bishop in three doesn’t believe that killing almost a million unborn Americans per year for our sexual convenience ought to take precedence over other policy questions.

Similar leftist currents long ago captured Mainline Protestant churches, on the whole. George Soros now pours money into groups trying to boost leftist politics among evangelical churches, too. He and his allies are canny enough to see that churches still have political influence. Strong believers make excellent zealots. At least if you can pry them away from supernatural matters, and turn them into this-worldly Utopians.

Under Our Laws, Unborn Children Are Not Even Animals

Here lies the heart of the moral confusion in many churches: Like slavery or segregation, abortion is not first a policy question. It’s a moral one. Today, half the country votes for politicians who want to grant unborn children no moral status at all. Not even that of animals.

As I’ve said here before, The “Seamless Garment” is a reckless, impossible, even undesirable fantasy. (Imagine if vegetarianism meant foreswearing all protein, period.) The “Garment” demands that in return for letting the government save unborn children from being killed for our convenience, we must impose a suffocating, paternalist, open-borders socialism. That’s why I think it was invented in the first place, to make the pro-life position ridiculous and irrelevant. In politics, you call that a “poison pill.”

I’m tempted to say that pro-life legislators ought to amend the animal cruelty law, designating unborn children as animals. That way they’d get some protection. But I don’t want to stop a good law in its tracks by adding … a poison pill.

If a new federal anti-cruelty law passes, sentient mammals will be protected from casual savagery. (A law long overdue, in my opinion.) David Daleiden, the victim of a rigged trial in California, offered witnesses who testified that Planned Parenthood’s doctors cut the beating hearts out of unborn babies, without any painkillers. All this, to capture valuable human organs it goes on to sell. For revealing that, Daleiden may face both bankruptcy and prison.

Where Are the “Right Wing Extremists”?

One side thinks this situation is morally good. Just so, one set of Americans supported the owning and sale of slaves, and later laws threatening prison for interracial marriage. We face no comparable divide on the other so-called “life issues” that liberal Christians raise to distract us from their yawning at Planned Parenthood’s ghoulish trade. Where are the prominent, office-holding Republicans who support:

Yet every Democrat but one in the presidential race is just that extreme in his contempt for unborn children. Only Tulsi Gabbard opposes late-term abortions and infanticide. Only she even bothers to revive Bill Clinton’s old, vague hope that abortions become “rare.” For saying that, Gabbard got condemned by mainstream abortion lobby NARAL:

Rep. Tulsi Gabbard wants abortion to be “safe, legal, and rare.” This is a position — making abortion “rare” — not supported by pro-choice advocates, including NARAL Pro-Choice Ohio. #AskAboutAbortion #DemDebate

It’s not enough to obey Big Moloch. You must learn, deep in your heart, to love him.

That’s why abortion is a more pre-eminent moral issue. Because we’re not arguing policy. That word speaks of how best to achieve a goal we all agree on. Such as an orderly immigration process, or a clean environment that allows for strong economic growth. No, we stare at each other across the barbed wire of a moral Berlin Wall: One group wants freedom to kill without the slightest regret or apology. (“Shout your abortion!”) The other group wants to stop them. To welcome these new Americans, and hash out the best ways to do that.

Back when the real, bloodspattered concrete Berlin Wall still stood, the same kind of denial was in fashion. “Centrist” politicians in Europe spoke of a “convergence” between Communism and liberal democracy. They hoped for some “Eurocommunist” middle ground, where Western leftist elites could administer a “humanist Marxism.” My Yale professors scoffed at “extremists” like Solzhenitsyn, Reagan, Walesa and John Paul II, who demanded the Wall come down. There were plenty of bishops and pastors running pink fogs machines all through the Cold War. For the first time in decades, that miasma is belching forth from the Vatican. With many Mainline Protestant churches belching back in response.

Strong believers make excellent zealots. At least if you can pry them away from supernatural matters, and turn them into this-worldly Utopians.

This divide is a stark and hideous fact, but a fact it remains. It’s the kind of fact we’d rather not think about. We’d love to drape this Berlin Wall with felt banners reading, “God Loves Me, S/He Don’t Make Junk!” Or set up smoke machines to obscure it in a pink, happy fog. Maybe drape it with Christmas lights on November 1. Pretend it’s the wall of Santa’s Workshop. But the machine guns are still up top and the guards still look down with steely, Stalinist eyes. And the bodies keep piling up, which our enemies won’t even grant decent, human burial.