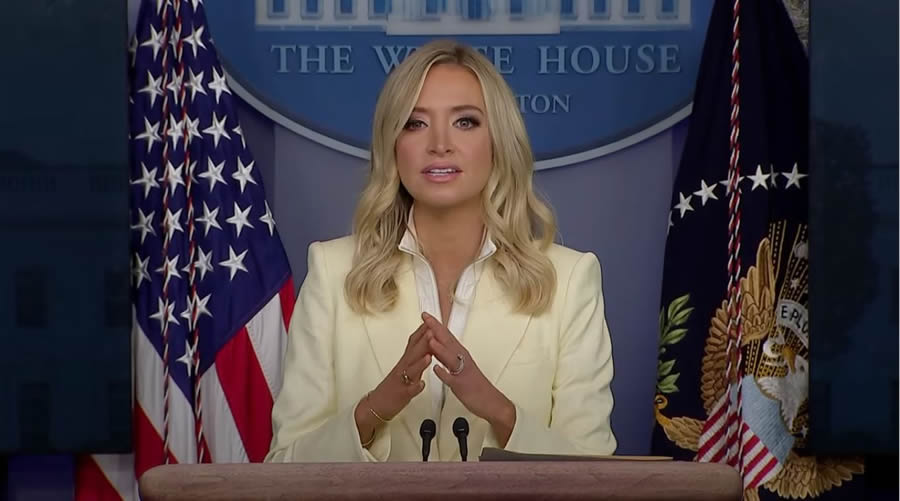 With degrees from Harvard and Georgetown — not to mention a study-abroad stint at Oxford — no one will be able to say Kayleigh McEnany, the president’s new press secretary, was not prepared for the job. Her experience at CNN as a political pundit, as well as her time at Fox News working for former Arkansas governor Mike Huckabee, her job as a spokeswoman for the RNC and President Trump’s campaign, made her the perfect candidate for the position. Even at the tender age of 32.

McEnany started her political career as a high-school student when she volunteered for the 2004 Bush-Cheney presidential campaign. After she graduated from high school, she studied at Georgetown University’s School of Foreign Service. During her time there, she studied abroad at Oxford. After graduating in 2010, McEnany took a job at Fox News as a producer for the Mike Huckabee Show. After a few years, she went back to school. In 2016 she graduated with a law degree from Harvard.

CNN hired McEnany as a paid contributor when she was a law school student. While there, she made some statements about Donald Trump that mainstream media publicized, saying that she switched from not supporting Trump to being his newest and fiercest defender.

In 2015, on CNN, McEnany talked about Trump’s statement that Mexico was sending immigrants to the U.S. who were “rapists” and bringing drugs and crimes to the country. “To me, a racist statement is a racist statement. I don’t like what Donald Trump said,” McEnany stated. “Donald Trump has shown himself to be a showman, I don’t think he’s a serious candidate. I think it’s a sideshow. It’s not within the mainstream of the candidates.” She continued to say she didn’t support his comments. “I think he said something very unartful, very inappropriate.”

CNN said she began supporting Trump the following month. Earlier this month, McEnany explained her comments during a press briefing. She said she made those comments after watching CNN and “naively believing some of the headlines” during the first few weeks of the 2016 presidential campaign. In 2017, McEnany left CNN. She then was named “Republican National Committee spokeswoman,” and joined the Trump campaign in 2019 as national press secretary.

Critics of the new press secretary claim that she made erroneous and misleading comments about the coronavirus. On Trish Regan Primetime in February, McEnany said, “[W]e will not see diseases like the coronavirus come here, we will not see terrorism come here, and isn’t that refreshing when contrasting it with the awful presidency of President Obama?”

Reuter’s White House correspondent Jeff Mason questioned McEnany in a press briefing. “In a previous life, before you were press secretary, you worked for the [Trump] campaign. And you made a comment, I believe on Fox, in which you said President Trump will not allow the coronavirus to come into this country. Given what has happened since then, obviously, would you like to take that back?”

McEnany explained that her comments had to do with Trump’s travel restrictions he placed on China. She pointed out that the intention of the president’s restrictions was to “prevent the virus from spreading in the U.S.” She added:

McEnany said, “I’ll leave you with those questions and maybe you’ll have some answers in a few days.” She then left the briefing room.

She’s a tough woman to intimidate. She has had the experience that makes her so. Jason Miller, co-host of the podcast War Room: Pandemic, told The Guardian to “Keep in mind that she went through a couple of years of being a CNN political commentator where she was rumbling with Erin Burnett and Anderson Cooper and Chris Cuomo and Van Jones and Ana Navarro and every other hater that’s out there. So if Kayleigh can go toe to toe with the toughest anchors and commentators on TV, she’ll do just fine with the White House press corps.”

Tim Murtaugh is the director of communications for the Trump campaign. He told The Guardian that liberals just want to question her intelligence. “And I would say to people, you underestimate Kayleigh McEnany at your own peril. I don’t think they’re turning out too many dummies from Oxford and Harvard Law School.”

A Woman of Faith

But McEnany isn’t only a tough-as-nails White House spokesperson. She’s also a woman of faith. Murtaugh recalled that McEnany began a Bible study in Arlington, Virginia, with a group that continues to meet weekly — virtually through the coronavirus outbreak. And then, two years ago, McEnany went through a double mastectomy. She had tested positive for a BRCA2 genetic mutation that meant she was high risk for developing breast cancer. She wrote in a Fox News article that “My faith in Jesus Christ was my strength that day,” and that He can turn life’s trials into good. Her family’s support “and that of my Savior carried me through.”

McEnany’s faith was strengthened during her time at Oxford. It was there that she was under the tutelage of evangelist Ravi Zacharias, who died earlier this week. CBN recently interviewed the new press secretary about her connection to Ravi and what his ministry meant for her. She became emotional. “We don’t have to cry because we’re Christians,” she said. We know he’s with Jesus.

“So Ravi, his life may have ended, but his life continues in the next life. He’s someone I’ll meet in Heaven. Rest assured, his legacy will always be here and he will continue to change lives.”