Who Can Blame Erdoğan for Going Back to the Future? 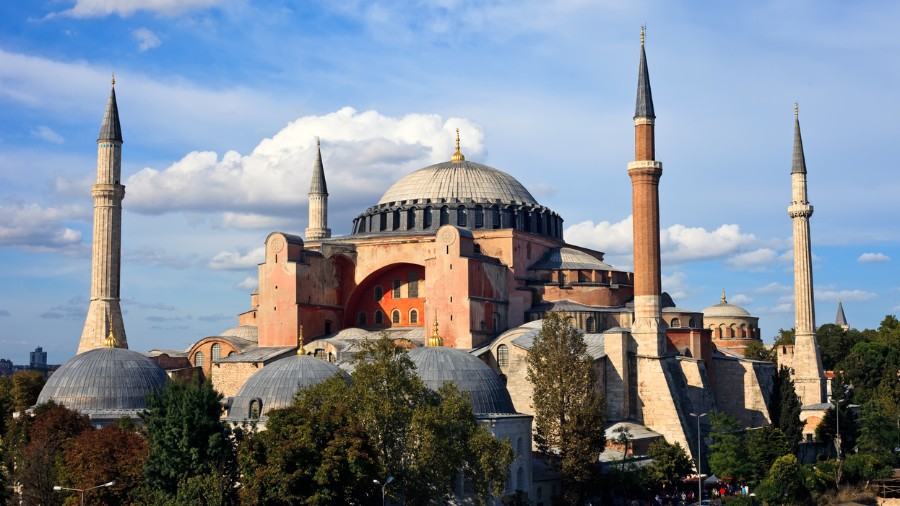 Turkish President Recep Erdoğan finally pulled the trigger last Friday. He went back to the future, declaring Hagia Sophia a mosque. Turkey’s top administrative court had already ruled in his favor. Hagia Sophia, “Holy Wisdom,” was ordered built by Eastern Roman Emperor Justinian I (532-537 AD). It served as the main church for the Byzantine Empire. It was also the center of Orthodox Christianity for almost a millennium. But in 1453 the Ottoman Turks conquered Constantinople. Sultan Mehmet II made the church into a mosque.

For almost five centuries Ottoman Muslims worshipped at Aya Sofya. But the Empire collapsed not long after World War I, replaced by the Turkish Republic. Its secularist leader, Mustafa Kemal Atatürk, ordered Aya Sofya made into a museum in 1935. So it remained for 85 years.

Why Did He Do It? Speculation

Why did Erdoğan undo that? Clearly it’s part of the Turkish leader’s plan to erase the legacy of Atatürk. This will make Turkey more Sunni than secular. But wait. It’s more nefarious than that. Erdoğan wants to resurrect the caliphate. With himself as caliph. He might even be prepping for the coming of the Mahdi, Islam’s main eschatological figure.  More sober analysts debate whether Turkey’s President is a “neo-Ottoman.” Some say no. Others say he is, and especially in foreign policy.

Pope Francis was “deeply pained” by the decision. The US State Department issued a milquetoast statement of “disappointment” at Erdoğan’s move. Well, to be fair there is a close-out sale at Brooks Brothers. First things first. And at least State’s statement did make Pope Francis look good. For a more robust condemnation, look to Russian Orthodox Church Patriarch Kirill. He deemed it “a threat to the entire Christian civilization.”

Why Erdoğan Did It: Analysis

I too decry the Turkish President’s decision. As a historian of the Middle East. And more importantly as a Christian. But I am not at all surprised that Erdoğan made this decision. Rather, I wonder why he took so long to do so. Erdoğan may be a swaggering, overbearing, tin-plated dictator with delusions of sultanhood. But he’s not stupid. Even if he’s not trying to resurrect the Ottoman Empire, he’s certainly been working hard at making Turkey more Islamic. Turning the most famous church in Christian history (sorry, St. Peter’s) back into a mosque certainly bolsters his Muslim bona fides.  It also may get him back into the top spot as the world’s most influential Muslim. (Erdoğan headed the list in 2019, but has dropped to #6 so far this year.)

About 50% of the Turkish electorate supports Erdoğan and his re-Islamizing AK Party at any given time. The newly-rebranded Aya Sofya Mosque will be popular with that half of the electorate. So this move shores up his base. Abroad, it can’t help but win him more support among Islamic fundamentalists, especially Sunni ones.

It probably won’t win any terrorist hearts and minds (even if they have the former), however. The change will also be a wash vis-à-vis the Islamic Republic of Iran. While Ankara and Tehran have been papering over their differences in recent years, they are in a competition for top dog in the Islamic world — every bit as serious as that between Iran and Saudi Arabia. And the ayatollahs are not about to give Turkey’s Sunni leader even so much as a fillip to his reputation.  But, overall, Erdoğan’s repurposing of Aya Sofya burnishes his Islamic credentials and so constitutes a net gain for him in the Dar al-Islam.

What about in the ostensibly-Christian world? Vladimir Putin’s response was remarkably low-key, considering the Russian Orthodox Patriarch’s fulmination. He is reported, in a phone call with Erdoğan, simply to have warned him of “significant public outcry” in Russia. Unsurprisingly, no leader in post-Christian Europe has yet issued a statement — although one might well expect ones of support from dhimmis such as Germany’s Angela Merkel. The Turks would probably have to march on Vienna again before NATO would oust them — if then. And what of the US? As noted, our State Department could only muster tepid disapproval. Where’s President Trump on this issue? Silent, so far. He’s probably not willing to risk the recent, much-ballyhooed thaw in icy US-Turkey relations.

Why Blame the Turks?

And why should he? The bottom line is that the Ottoman Turks won Hagia Sophia, fair and square — albeit brutally — in 1453. If I were their descendants, I’d feel few qualms about turning it back into a functioning mosque. If the Christian world is too spineless to resist, why not?

Will This Wake Up Christians?

Perhaps this repossession will inflame some zeal among Christians, and awaken them to the clash of not just civilizations, but religions, going on. But most American Evangelicals are too busy surrendering to the culture. Far too many Catholics have gotten drunk at the post-Vatican II, (Pope) Franciscan well of ecumenism. Only the Orthodox show any legitimate signs of awareness, but they, for the most part, remain scattered, divided and leaderless.

At least the Turks have promised not to get rid of the mosaics of Christ.