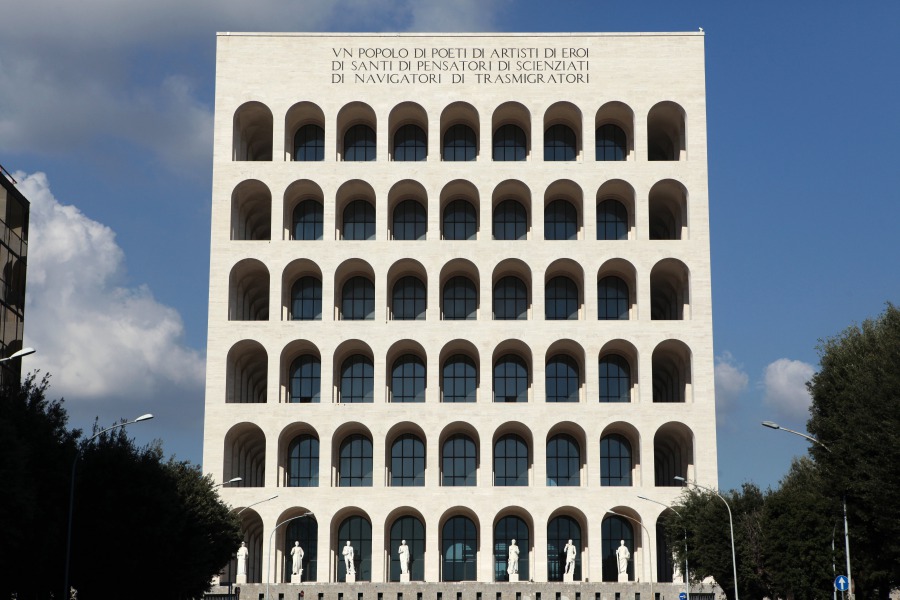 The Palazzo della Civiltà Italiana, or Palace of Italian Civilization, in Rome. Built by Mussolini, the imposing, simple building modeled on the Colosseum is an icon of fascist architecture.

It is the best science fiction can be. I just finished Leviathan Falls, the last book of the Expanse series. There are nine books in the series, and each one has a 20-hour audiobook version. They are long books and it is a long series. (There is also a TV series on Amazon Prime.)

The series takes known science and technology and extrapolates forward. It then creates its world around that. Then it goes one more step. It adds something that we — and the people of the future human civilization it has created — can’t understand. Something that might as well be magic. And it extrapolates what the human race will do.

Within this framework, The Expanse explores several ways the human race can govern themselves. Spoiler Alert: They are all bad.

There are three antagonists to the human race. The first is the builders of the “protomolecule,” a billions of years dead race whose advanced technology the human race has stumbled upon. Then there are the mysterious entities who destroyed the protomolecule-builders. And, add to those external enemies, our most constant enemy: the human race itself.

In the battle of Man versus Man, the series explores fascism, and it does it in an un-cartoonish way.  Science fiction allows us to see something at a distance and in a different light. The Expanse series puts fascism in an imaginary future world, which lets see it dispassionately. We can move it to a distance from Auschwitz and Guernica, from Hitler, Mussolini, and Franco. We can remove the personalities and see its basic flaws.

The Expanse presents the fascists, as individuals, as good people, by which I mean people like you and me. Their leaders are just people who want the very best for humanity — as they see it. Those words after the dash are very important. The system of fascism puts too much power in the hands of too few human beings, and you all know about human beings and how rotten they can be.

The authors of the Expanse series, who together write under the pseudonym James S.A. Corey, don’t offer any answers. They take nine long books in a series to say what Winston Churchill said: “Many forms of Government have been tried, and will be tried in this world of sin and woe. No one pretends that democracy is perfect or all-wise. Indeed it has been said that democracy is the worst form of Government except for all those other forms that have been tried from time to time.”

He said this in 1947. He knew what he was talking about. He’d spent many years warning his countrymen about the dangers of the Nazi government in Germany and the Fascist government in Italy. Then he’d spent five years leading his country in a life or death battle against them. Then, after all that, an apparently ungrateful nation had booted him out of office in a democratic election. For a Labour party government that promised a new society.

Others had been less alert to the dangers than Churchill. The Nobel prize-winning playwright George Bernard Shaw said when Mussolini came to power that he was “the right kind of tyrant.” The socialist Shaw thought Fascism the answer to “indiscipline and muddle and Parliamentary deadlock.” When Hitler came to power, he called him “a very remarkable man, a very able man,” and boasted that he was the only writer in England who was “scrupulously polite and just to Hitler.”

We may, understandably, become impatient with democracy. It is undisciplined and muddled and often winds up in a deadlock. We might want more efficient solutions to whatever the problem of the day might be. A powerful government that acts in a unified, efficient manner, whether that government is fascist, communist, monarchist, or whatever, might be appealing … for a moment.

Democracy is inefficient, but inefficiency in genocide is not a bad thing. If I want to improve a democracy, the beginning is easy: I can improve myself. I can read more; I can listen more; I can try to see the other fellow’s side more.

Bobby Neal Winters is associate dean of the college of arts and sciences and a university professor at Pittsburg State University. A native of Harden City, Oklahoma, he blogs at Red Neck Math and Okie in Exile. His last article for The Stream was “God’s Beautiful World, and What You Need to See It All.”