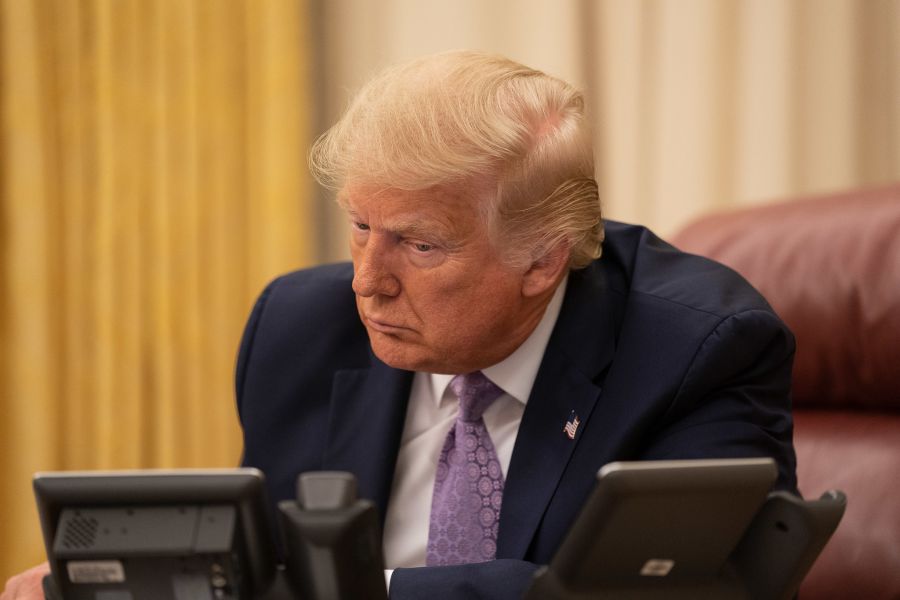 President Donald J. Trump, joined by White House senior staff, speaks on the phone with Prime Minister Benjamin Netanyahu of Israel, and Sheikh Mohammed Bin Zayed, Crown Prince of Abu Dhabi and Deputy Supreme Commander of the United Arab Emirates about their agreement to establish full normalization of relations between Israel and the United Arab Emirates Thursday, Aug. 13, 2020, in the Oval Office of the White House.

The historic peace accord between Israel and the United Arab Emirates is a major victory for the Trump administration’s “outside-in” negotiating strategy. More Arab nations soon may follow.

By assisting negotiations between Israel and the outer ring of Arab states, the administration sought to jump-start regional peace proceedings while encouraging greater Palestinian flexibility by depriving the Palestinian Authority of its longstanding veto power over other Arab leaders’ policies toward Israel.

Israel and the UAE agreed to full normalization of relations in a phone call Thursday with President Donald Trump, marking the first peace accord between Israel and an Arab country in 25 years.

Under the terms of the agreement, the UAE will become the third Arab country to negotiate peace with Israel, following Egypt in 1979 and Jordan in 1994.

If the momentum can be maintained, the UAE agreement could breathe new life into an administration peace plan that was declared dead on arrival in January by Palestinian leaders who clung to maximalist demands for statehood and the return of hundreds of thousands of Palestinian refugees to Israel.

The text of the joint statement by Israel and the United Arab Emirates declared that the diplomatic breakthrough was made at “the request of President Trump.” It said that Israel will “suspend declaring sovereignty over areas outlined in the President’s Vision for Peace and focus its efforts now on expanding ties with other countries in the Arab and Muslim world.”

The accord also specifies: “Israel and the United Arab Emirates will join with the United States to launch a Strategic Agenda for the Middle East to deepen diplomatic, commercial and security cooperation together and with other countries committed to peace and non-interference.”

This language suggests a broadening of the Trump administration’s previous proposal for a Middle East Strategic Alliance, which Heritage Foundation analysts called for in a report in April.

The new agreement makes public the expanding strategic, economic, and diplomatic cooperation behind the scenes between Israel and the UAE. Both countries consider Iran to be their chief threat and were motivated to explore secret contacts by strong opposition to the Obama administration’s flawed nuclear deal with Iran.

Iran is likely to be the biggest loser from the consequences of improved Israel-UAE ties, aside from Palestinian leaders who continue to oppose a realistic peace with Israel.

Not only does Iran need to beware of close military and intelligence cooperation between two of the most effective military powers in the Middle East, but the accord also is expected to clear the way for the export of more sophisticated U.S. weapons to the UAE, including armed drones that were denied in the past.

Palestinian leaders were livid about the agreement and accused the UAE of betraying them.

A senior Palestinian Authority official told The Jerusalem Post: “Israel has annexed the United Arab Emirates instead of annexing the West Bank. This is a very dangerous development that requires a response not only from the Palestinians but the whole Arab world.”

The normalization agreement demonstrated that the current Palestinian leaders, increasingly criticized by their own people for failing to deliver prosperity and stability, no longer hold hostage other Arab states in peace negotiations.  This will help create more favorable conditions for future peace agreements, including an Israeli-Palestinian accord if a new generation of Palestinian leaders becomes more pragmatic about the necessity of concessions to achieve statehood.

In addition to encouraging a more realistic approach to peace negotiations by Palestinian leaders, the Israel-UAE agreement includes significant political benefits for all three signatories.

Trump has gained a major foreign policy achievement shortly before the presidential election that will boost his support among Israel’s supporters, particularly evangelicals concerned about Israel’s future.

In fact, American evangelical leaders were involved in the run-up to the negotiations, sending a delegation to the UAE in October 2018 and other meetings that focused on normalization issues.

“Evangelicals want Israel to be safer, stronger and more peaceful, not necessarily bigger,” American-Israeli author Joel Rosenberg, who participated in the meetings, told The Jerusalem Post.

The agreement also helps Israeli Prime Minister Benjamin Netanyahu by giving him an important diplomatic achievement at a time when he faces rising domestic political criticism for his government’s response to COVID-19 and failure to pass a budget, as well as his own pending trial for corruption charges.

He “did not and will not remove sovereignty from the agenda,” Netanyahu stressed. “I will never give up on our right to our land.”

But it isn’t clear how long Jerusalem will suspend its claim to sovereignty over parts of the West Bank that are also claimed by Palestinians, or what the reaction of the UAE will be if it does so.

Sheikh Mohammed Bin Zayed Al Nahyan, the crown prince of Abu Dhabi and deputy supreme commander of the United Arab Emirates, also can claim a major achievement. He took off the table, at least temporarily, Israel’s proposed extension of sovereignty over parts of the West Bank.

Sheikh Mohammed also will reap benefits for his own people in the form of closer strategic cooperation with the United States, access for UAE citizens to visit the Al-Aksa mosque in Jerusalem, and cooperation with Israeli experts in developing a vaccination for the coronavirus and improving access to adequate and safe water supplies.

The agreement is a huge win-win-win outcome for the United States, Israel, and the United Arab Emirates.  It clears the way for closer cooperation against Iran by defusing at least temporarily the sovereignty issue, which would have distracted attention from Iranian threats and given Iran and other Israeli enemies a wedge issue to undermine Israel.

The accord also demonstrates that Arab leaders can achieve more by engaging with Israel diplomatically than by boycotting diplomatic efforts to improve relations, as the Palestinian Authority has done.

Achieving a lasting peace is impossible without such diplomatic engagement.

For more about this topic from The Daily Signal:

James Phillips is the senior research fellow for Middle Eastern affairs at the Douglas and Sarah Allison Center for Foreign Policy Studies at The Heritage Foundation. He has written extensively on Middle Eastern issues and international terrorism since 1978. Read his research.