What Ricky Gervais Should Have Said to Michelle Williams on Abortion 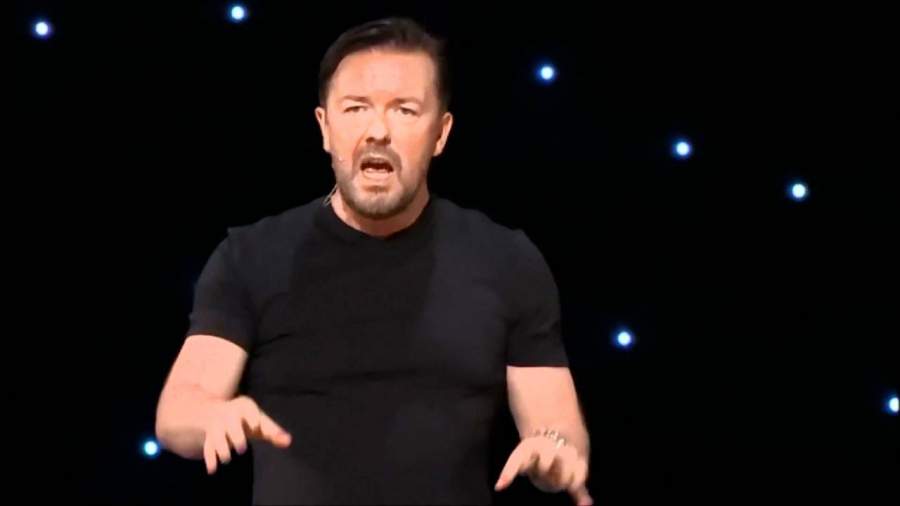 It’s crucial that we as Christians offer our fellow sinners a voice of redemption and healing, not scorn and accusing. That’s true in particular of sins born out of weakness, fear and ignorance. Given estimates that one woman in three of the relevant age group has had an abortion, we’re right to provide vibrant ministries such as Rachel’s Vineyard. At such retreats women who said yes to abortion can find forgiveness. From the ranks of such penitent moms, many pro-life leaders emerge.

So I would like to write a column all about that approach to abortion.

And I will, another day. I promise, folks.

Today I’m not talking of women in poverty who chose abortions out of fear, who still live with regret and shame over their mortal choices. Those women deserve all the mercy God will grant them.

How many ultrasounds of this little cell-clump have you posted on Instagram, luv? Tweeted it to your followers, have you? Maybe given it a name?

No, I want to address the new and hideous thing, fresh crawled from the pit of hell, of rich, powerful, beautiful women “shouting” their abortions.

Planned Parenthood and its colleagues in the medical waste manufacturing industry have been urging their high-profile backers to do this. To face our mercy with scorn. Our effort to “love them both” (mother and child) with a calculated sneer. To answer our call to protect the human rights of unborn children with appeals to naked self-interest, like a wealthy slave-trader blowing pricey cigar smoke in an abolitionists’ face.

And all that deserves no mercy. I’ll offer it none. When evil offers a brave face we need to smash it. Penitence may come later, as Nuremberg followed Normandy.

Recently, British actress Jameela Jamil (host of the hit show The Misery Index, of which I’m a fan) decided to “shout” her abortion.

Receiving THOUSANDS of messages about how I made a mistake having an abortion 7 years ago and how I must be a miserable person… I am in fact a happy, thriving multi millionaire, madly in love, with free time, good sleep and a wonderful career and life. But thanks for checking💋 pic.twitter.com/F0QqQVv1tQ

Greed at the Golden Globes

Even more grotesquely, the lovely and gifted Michelle Williams chose to use her platform at the Golden Globes to make a similar statement. She stood there, visibly pregnant with a child she plans to keep, and cited her own choice to abort a previous child as key to her financial success. She actually thanked God for legal abortion, and urged women to vote pro-abortion “in your own self-interest.”

Michelle Williams, while visibly pregnant, claims she wouldn’t have won her #GoldenGlobes Award if she didn’t kill her previous child.

No trophy is worth more than a child’s life.

Sacrificing our children to pursue our dreams is the total antithesis of women’s empowerment. pic.twitter.com/McGZDEVmo5

Lila Rose is right, of course. But we need more voices than hers. In fact, there’s one voice we really could have used at that Golden Globes moment. Namely, the voice of host Ricky Gervais.

He’d already stunned the crowd and redeemed the entire broadcast by spending his opening speech in a scathingly, hilarious take-down of “Woke” Hollywood elites. He ordered the actors present to lay off politics, since they’d each spent “less time in school than Greta Thunberg.” He even taunted those present as longtime friends of Jeffrey Epstein. In other words, Gervais was great.

While a left-leaning atheist, he has consistently shown the courage to blaspheme the new, fake religion of Victimism that’s suffocating the West in a pink fog of hypocrisy. He has spoken out fiercely, if puckishly, against social media censorship.

How Much for This Clump of Cells, Then?

How refreshing it would have been if Gervais had strolled up to the lectern when Williams was finished, and said the following:

GERVAIS: Yes, luv, that was bloody eloquent. It’s not often in Hollywood that we hear someone brave enough to speak up for “self-interest,” is it? Your next project, I hear, is a 72-part Claymation Netflix series adapting Ayn Rand’s Atlas Shrugged. I’m sure it will be brilliant.

I’m a bit curious though — if you’ll humor me. You said between the lines that you couldn’t have “kept the balance” of your career as a gorgeous, millionaire actress if you hadn’t aborted your last baby. Sorry, that’s what it was. No, not sorry. I don’t care! Don’t care.

Or was it just a clump of cells, like this one you’re carrying now? How many ultrasounds of this little cell-clump have you posted on Instagram, luv? Tweeted it to your followers, have you? Maybe given it a name?

Since we’re talking self-interest, and this is Hollywood, let’s put a number on it. How much money do you reckon you would have lost if you hadn’t killed the last baby? One million, two, shall we say four? Since you weren’t as hot a quantity back then — though you were younger — maybe four would be too high. Let’s put it at $3 million, just for the sake of argument. Ok?

No, no, stay here luv, we haven’t finished. You can sit down again in a moment.

Okay, if it was worth getting rid of your last baby for $3 million, I’d like you to price this new one. How much for it? No, let me be grossly specific and make you an offer. This room is full of lawyers, I’m sure one could draw up the contract. I’ll offer you double. Six million U.S. dollars — you know I’m good for it, I’ve had a very good year — if you abort this baby tomorrow. Or clump of cells. Whatever. I don’t care!

Would six million do it? Care to make me a counter-offer? We’ve already established what kind of person you are, luv. Now we’re just haggling about the price.

Oh wait, here come the security guards to escort me off the premises and out of the entertainment industry forever. Buh-bye folks! It’s been fun! I don’t care … .