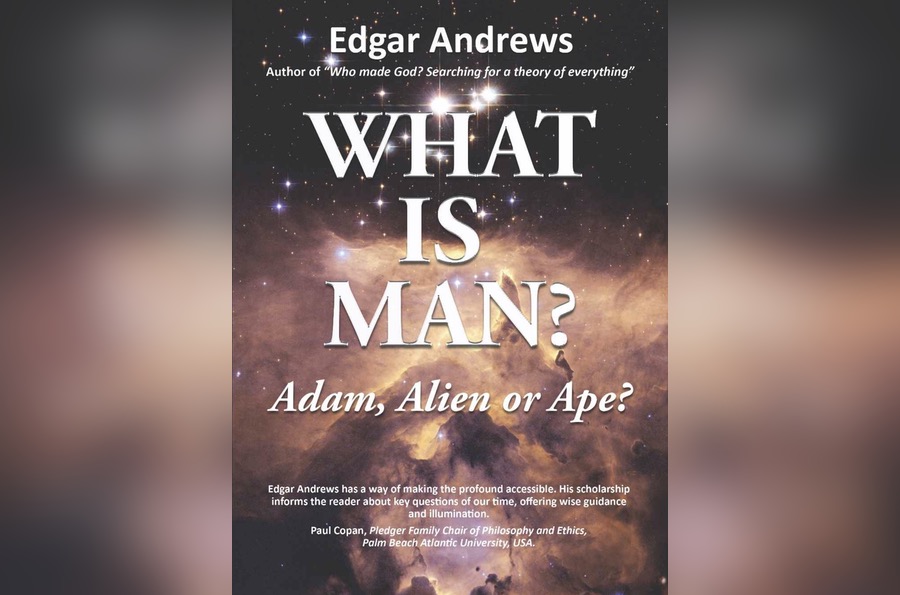 “Humans came about through evolution. We’re no different from any other animal; just another rung up the ladder of complexity, that’s all. Disagree? Then you’re guilty of ‘speciesism.’”

“There’s nothing truly spiritual about humans, no soul; and when we die, we’re gone. So make the most of it while you can.”

Heard any of that? Hang around a university campus long enough and you’re certain to. Some of us who are years past college might recall the beer commercial. It opens with a scene of high adventure, high risk, high reward; and then preaches the meaning of life: “That’s when you know what life really is. You only go around once. You gotta grab for all the gusto you can — even in the beer you drink. Why settle for less?”

I guess this is what life really is; this is how you make the most of it. Or is there more? What are we really here for? What’s the point? More fundamentally, the question comes down to, What is Man? — which happens to be the title of an outstanding new book by the British physicist Edgar Andrews. The subtitle asks whether we’re ”Adam, Alien or Ape?

We’ve Lost Track of Ourselves

Christians exploring our culture’s current free-fall typically say it’s because we’ve lost track of who God is. There’s a flip side to that: We’ve lost track of what we are as humans. Infected by atheism, deceived by Darwin, Crick, Skinner and Pinker, we no longer have any inkling of what it means to be uniquely created in God’s image.

It’s costing us — badly. In Andrews’ words in an email interview with The Stream, ”The universally popular secular narrative of mankind’s origin, nature and destiny… is robbing us of our identity as human beings.” Humans may be “overevolved,” as he put it, but we’re animals nonetheless.

“We are simply animals that happened to win the evolutionary jackpot,” says Andrews; we’re “the meaningless product of a series of cosmological, chemical and biological accidents.”

So Andrews wrote What Is Man, he tells The Stream, in order to “put the record right.”

It’s about time we all got the record right — and the secular answer isn’t going to do it.

The secular story says we’re one with the animals. So then why not treat babies in the womb like ‘possums in the yard? Don’t want ‘em? Kill ‘em!

The secular story says we’re nothing special. Thus PETA’s president Ingrid Newkirk could say “a rat is a pig is a dog is a boy.” People laughed her, but fewer laughed when Princeton ethicist Peter Singer invented the virtually equivalent idea of “speciesism.”

We’ve got a lot of work to do, unwinding the secular story of humanity.

The secular story says we’re constantly evolving, therefore everything’s in flux. So then why not let sex, gender and marriage change with the times, too?

This secular story has infected us all, including many Christians. It takes a lot of unwinding to straighten it all out. Andrews wisely starts at the beginning: where we came from. Does evolution really explain us?

From there he takes a long step backward to where everything came from. Lawrence Krauss and the late Stephen Hawking both highly regarded scientists, have both said we came from pretty much nothing. Or as Andrews clarifies it, “the laws of nature created nature.” Again — does that explanation work?

The answer in both cases is no. Evolution has too many unanswered questions, some of them unanswerable even in principle.

Deliciously Down on Bad Ideas

For the other question Andrews give his delightful “Cheshire cat argument.” It’s taken, obviously enough, from Alice’s Adventures in Wonderland. “They’re observing the universe (the cat),” he says, “with its face wreathed in smiles (the laws of nature) and then subtracting the cat, leaving only the smiles (the laws) behind.” Which is fine in children’s fiction, but hardly so in science.

That’s a good sample of Andrews’ knack for getting deliciously down on bad ideas of what it means to be human. It’s all deadly serious, yet at the same time it’s all in good humor. And solid common sense besides.

We’re a unique species, specially created by God in His image, fallen from our original innocence, yet retaining the dignity of God’s loving hand upon us.

For instance: Most of the supposed evidence for man’s evolution comes via fossils and artifacts. Unfortunately for us all, that branch of science “relies much more heavily upon interpretation than do experimental sciences” — which would include physics, chemistry and so on. “It shouldn’t surprise us, then,” says Andrews, that in this field “different experts offer different interpretations. … Debates often grow heated. Personal reputations are at stake.”

He makes a good point. It takes a pretty fair deficit in common sense not to expect people to hold on to their theories. This goes a long way toward explaining why scientists continue to insist humans evolved by a blind process. They’ve got a stake in it; the evidence they can get their hands on allows them to interpret things at will; and interpret they do.

So what, then, is man? Andrews goes to the Bible for his answer: We’re a unique species, specially created by God in His image, fallen from our original innocence, yet retaining the dignity of God’s loving hand upon us.

The surprising thing, for some, will be how much sense this makes. It explains why we think we matter: Because we do! It tells us why we think the world isn’t the way it was meant to be: Because it isn’t! Try figuring out either of those questions from the Darwinian point of view. It doesn’t work.

Neither does it work, trying to live as humans without knowing what it means to be human. What Is Man? puts the record right, just as Andrews said it would.

We’ve got a lot of work to do, unwinding the secular story of humanity. This book is a great place to start working on that.

Three Books That Formed Me: Two Christians and an Atheist