What if Nick Sandmann and Greta Thunberg Changed Places? 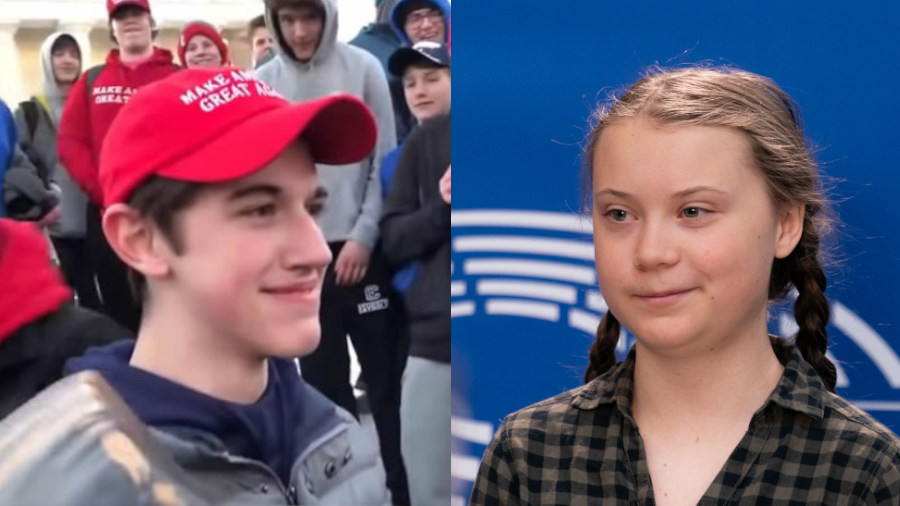 I think we can all agree it was unfair, what happened to Greta Thunberg. We need to make sure that kind of treatment is never meted out to a mere kid, ever again. Media outlets, politicians, and ordinary people around the world rushed to demonize her, and we should all be ashamed of ourselves.

Yes, there is much to dislike in her politics. She adheres to a highly implausible, apocalyptic worldview championed by rich, white elites. It demands that poor people around the world give up economic growth, reliable energy, and even (for some) having children. All this to prevent the imminent destruction of the planet — which some of the same groups and people have been predicting every ten years or so, each time for a different reason.

Remember the Population Bomb? It never went off. In fact, it fizzled completely. So now Western societies are scrambling to figure out who will support them in their old age, since they didn’t have enough children. (Spoiler alert: nobody will. We won’t be cared for by grandchildren, but euthanized by robots.)

Remember the 21st Century Ice Age? Neither do most people, but the prescription for that fashionable disease, like population control, and climate change, was weirdly precisely the same.

Whenever the same set of experts finds symptoms of a coming apocalypse, the medicine they offer is naturally expensive, and we can only buy it from the experts who diagnosed it. Whatever it is (plug in the crisis du jour), the only hope is to quickly (quickly! no asking awkward questions or you’ll be demonized as a “denier”) hand over more and more power for elites in government and academia over the private lives, work, and families of ordinary people.

There was no call for a TV journalist to say Greta Thunberg had the most “punchable face” in the world. She was suspended by her high school and formally investigated. The bishops of her own church even denounced her.

More control for the United Nations, less for elected governments. More billions for the ventures which these fine people warning us about the movements just happen to have started, either in massive “non-profits” or “green” corporations.

Yes, Miss Thunberg stepped up and served as the Charlie McCarthy for her puppeteer Antifa parents, and the power-hungry global elites who’d likely recruited the Thunbergs in the first place. But come on, she’s just a kid. Albeit a particularly insufferable one:

There was no call for a TV journalist to say she had the most “punchable face” in the world. It was wrong when even leftist media pundits jumped all over her, when reporters promised to contact any college or employer she might apply to. She was suspended by her high school and formally investigated. The bishops of her own church even denounced her.

We need to learn a lesson about media feeding frenzies. There must never again be a public lynching like Greta Thunberg’s.

The Cult of Nick Sandmann

Imagine if the world were very different. If such cruel treatment had been aimed instead at a beloved global icon, like Nick Sandmann. I know, I know, it’s hard to picture. That high school boy from Covington, Kentucky has been adopted worldwide as an icon for his pro-life activism. Who can forget the cool head he kept, through hours of public abuse at the hands of that hate group, the Black Hebrew Israelites? Or the way he and his friends just stood still, bearing peaceful smiles, when a leftist activist barged into his personal space and banged a ritual war drum?

That incident, of course, at the March for Life in Washington, was only the beginning. Since then, Sandmann’s face has been plastered all over magazines and newspapers. Media have dubbed him “the world’s conscience,” and reported each time he spoke about the crisis of disrespect for innocent life. That culminated, most recently, in his widely praised speech at the United Nations. He met with Pope Francis. His call for a “Respect Life” strike saw schoolchildren boycotting classes around the world.

It seems likely that Sandmann has a bright future ahead of him, as an opinion leader whom heads of state take time to meet with. He’ll probably get a free ride to Harvard, regardless of his test scores. Some call it the “activism scholarship.”

None of that will happen to poor Greta Thunberg. She was singled out for hatred by thousands of total strangers while she was just a teenager. Who knows how the hatred that attached itself to her name will affect her prospects in life?

I just want readers to strain their imaginations a little bit. Imagine if things had been the other way round. Imagine a world where Nick Sandmann had been demonized, and Greta Thunberg lionized. As John Lennon once sang, “It’s easy if you try.”