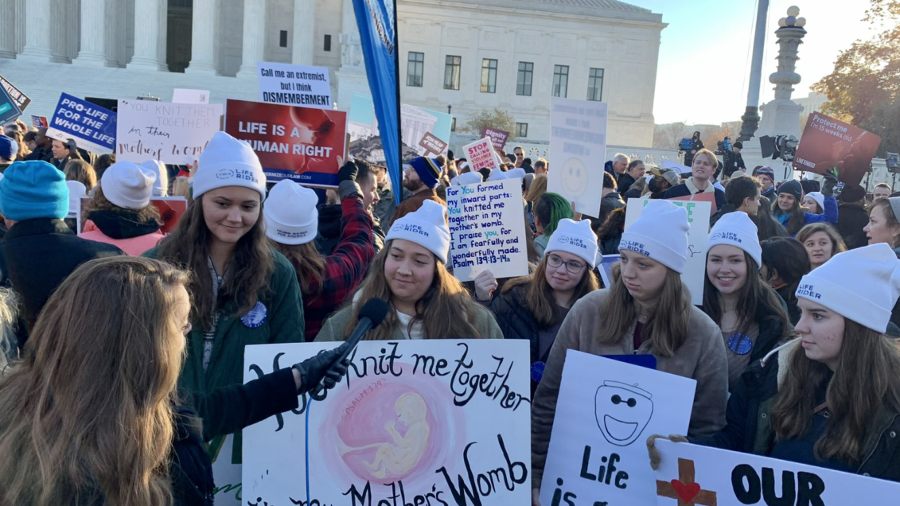 Pro-life students tell the author why they're at the Supreme Court while, inside, the nine justices hear arguments Wednesday for and against a Mississippi law banning most abortions after 15 weeks.

Large crowds of protesters on either side of the abortion issue gathered on a chilly early Wednesday morning in Washington as the Supreme Court prepared to hear a monumental abortion case.

As the morning wore on, police separated the sides with a metal fence, although it wasn’t immediately clear why. The Daily Signal observed few contentious interactions or behaviors, though the police presence was strong.

Some shoving took place here, seems to have calmed down. pic.twitter.com/EMJvudPig6

The high court heard arguments in the case of Dobbs v. Jackson Women’s Health Organization, which hinges on a 2018 Mississippi law that banned abortions after 15 weeks. Known as the Gestational Age Act, the law was blocked by a federal appellate court after abortion proponents challenged it on behalf of Mississippi’s last remaining abortion clinic, Jackson Women’s Health Organization.

The pro-life side of the crowd sings the national anthem. pic.twitter.com/Zelc0o2HQp

After the 5th U.S. Circuit Court of Appeals struck down the law in December 2019, the state of Mississippi asked the Supreme Court to take up the case.

Dobbs could be one of the most pivotal abortion cases in recent history, as it directly challenges Roe v. Wade, the Supreme Court’s 1973 decision legalizing abortion across the nation, and also addresses whether bans on abortion prior to fetal viability are constitutional.

Outside the court, many pro-choice protesters told The Daily Signal that women would die if Roe v. Wade is overturned. But pro-life protesters said that the move would empower states to decide abortion laws themselves.

The pro-abortion protestors are singing something I can’t make out. pic.twitter.com/5lOQGlwokU

Dueling rallies outside the Supreme Court this morning. Follow The @DailySignal today for updates on the Dobbs case. pic.twitter.com/SwCdjTlCGV

Many young people attended the protests. Liberty University brought in about 1,000 students from Lynchburg, Virginia, in 21 buses, students told The Daily Signal.

“We’re here representing the school; we’re praying for the justices as they begin to hear the cases,” a male Liberty University student told The Daily Signal.

“There were 21 buses that came and there were more on a wait list who couldn’t come because there simply wasn’t enough capacity on the buses to host as many of us who wanted to come,” a female student said. “I know that there are hundreds, if not thousands, of students back in Lynchburg, praying during our convocation, praying in groups of students, because this is such an important issue to us both as a school and as individuals.”

Liberty University students pray before SCOTUS. Students tell me that the school bussed 1,000 students here today. No other university has this kind of showing. pic.twitter.com/lqxZRpZw6w

“I don’t think about the fetus as a baby. It’s OK if someone believes that, but you don’t have the right to impose your belief on someone else,” one pro-choice protester told The Daily Signal. “There is no scientific consensus that a fetus is a baby.”

Some justices signaled Wednesday that they may vote to overturn Roe v. Wade, The Washington Free Beacon reported.

“This court should be scrupulously neutral on the question of abortion, neither pro-choice nor pro-life,” Justice Brett Kavanaugh said, according to the publication.

Pro-life advocates expressed optimism as the arguments drew to a close.

“Millions of faithful Catholics across the nation are hopeful after today’s oral arguments that the Supreme Court of the United States will restore sanity to its abortion jurisprudence, which has enabled over 62 million American children to be aborted since 1973 when Roe v. Wade was decided,” CatholicVote President Brian Burch said.

It was clear today that the justices were carefully considering the arguments made, and we sincerely hope that the court reaches a result that protects life. Mississippi’s commonsense law upholds America’s foundational respect for life, which is at odds with Roe. The U.S. is an extreme outlier in abortion law and policy, allowing late-term abortions and failing to protect the lives and health of unborn children and their mothers.

Marjorie Dannenfelser, president of the pro-life Susan B. Anthony List, said in livestreamed remarks at the court that “life is truly the most important human rights cause of our time.”

“From abolition to suffrage to the civil rights movement, principled women and men throughout history have always stepped up to lead at pivotal moments like this,” Dannenfelser said.

“The pioneers of the women’s movement clearly understood the violent, oppressive nature of abortion, and they adamantly opposed it,” she added.