A Shakespearean look at the Democratic field. 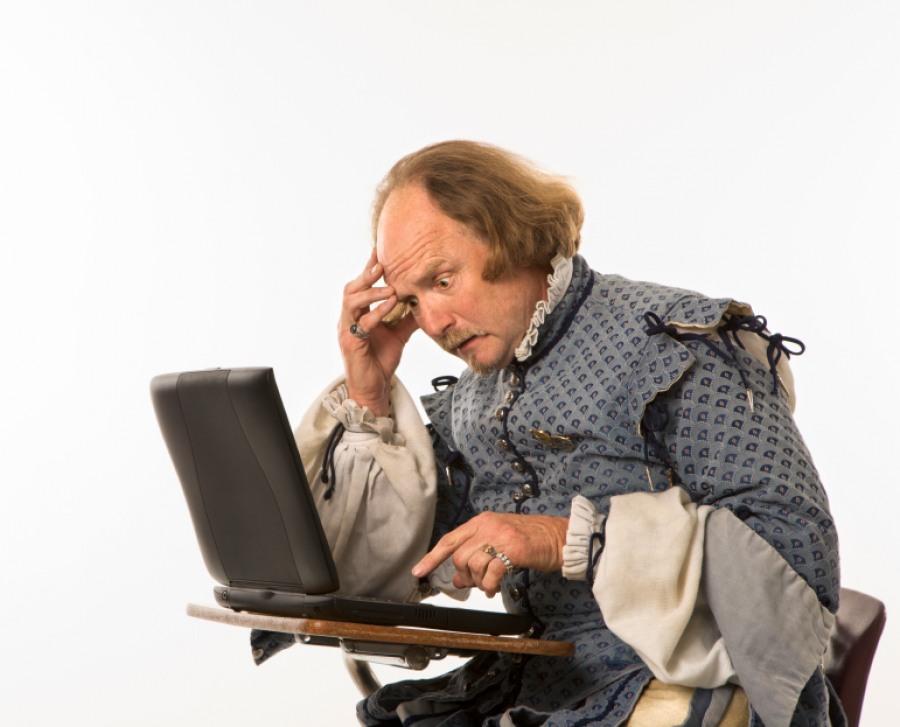 Journalists love to cast politicians as Shakespeare characters. (I’d bet this has more to do with intellectual posing than with actual knowledge of the Bard, however.) In the modern era, this has been going on for decades. Often the comparison is negative. Richard Nixon as Richard III has long been a favorite here. At least until Donald Trump took over as the big, bad Richard. (Which wasn’t negative enough for Stephen Greenblatt. Last year, in Tyrant: Shakespeare on Politics, he painted the 45th President as a mashup of the most evil characters in several plays.) But don’t forget that Hillary Clinton was Lady Macbeth to Obama back in 2008.

On the more positive side, Obama drew parallels to the brainy, self-flagellating Hamlet. The only more ludicrous comparison might have been George W. Bush to Henry V.

Yes, I acknowledge the advice “let’s not flatter politicians with grand Shakespeare comparisons.” I’d much rather bury Presidential candidates, especially Democrat ones, than praise them (Julius Caesar, Act 3, Scene 2). At least rhetorically. But it’s just so much fun to fit public figures we like, and dislike, into Shakespearean shapes.

Only one Shakespeare character sprang to mind when contemplating Crazy Bernie: Jack Cade. He was the (failed) socialist revolutionary opposing King Henry VI. Cade, if he ever rules England, plans to abolish the nobility, private property and currency. The modern equivalent? Eliminate the Electoral College. Cade also promises free food and drink.

Are the Democrats Comic or Tragic?

I enjoy doing this so much that last year I wrote a 2600-word blogpost, “Dictator or Deliverer? Applying Shakespeare to Trump.” My final verdict: Trump is most like the populist usurper Henry IV. And Hillary is the entitled, inept Richard II, removed by Henry Bolingbroke. Check it out, please. Today, I want to continue the discussion by looking at the Democrats running for President. Or at least the ones polling above single digits.

Former Vice-President Joe Biden is currently leading the pack, with 25% support. I considered equating Biden with King Lear, “a senile old man who makes a series of bad political decisions until just about everyone winds up dead.” Or blinded. While a Biden administration would almost certainly look like that, making Sleepy Joe such a major Bard figure is just giving him too much credit. From another angle, in his sycophancy (toward Prince Hal/Obama) and friskiness Creepy Joe resembles Sir John Falstaff. But, again, Falstaff is a larger-than-life figure, whereas Biden these days comes off as a ghost even of his former self.

The closest analog for Biden is the “self-absorbed, long-winded and dull” Polonius. Both are capable of occasional good one-liners, although Polonius’ (“neither a borrower nor a lender be;” “to thine own self be true;” “brevity is the soul of wit”) are more impressive than Biden’s (“three letter word, J-O-B-S;” “I’ve known eight Presidents, three of them intimately;” “they’re going to put you all back in chains!”) But that’s about the height of Joe’s expertise. Hamlet lumps Polonius into the category of “tedious old fools.” Joe belongs in the same basket. And he even hides behind curtains — although no one’s stabbed him back there.

Vermont’s Socialist Senator Bernie Sanders dropped to third in the latest poll (11%). But he remains the second-biggest name in the race. Only one Shakespeare character sprang to mind when contemplating Crazy Bernie: Jack Cade. He was the (failed) socialist revolutionary opposing King Henry VI. Cade, if he ever rules England, plans to abolish the nobility, private property and currency. The modern equivalent? Eliminate the Electoral College. Cade also promises free food and drink. His lieutenant “Dick” utters the famous line “the first thing we do, let’s kill all the lawyers”(2HVI, Act 4, Scene 2). And Cade immediately agrees.

Bernie’s not that violent (yet), but the last time he ran his spending plans were estimated to cost $18 trillion. This was before Sanders signed onto the lavish “Green New Deal” and forgiveness of all student loan debt. Jack Cade’s economic agenda was more reasonable. These two characters are equally ungracious, however. Cade disdains Alexander Iden for trying to help him (after which Iden, justifiably, kills him). Sanders scorns American capitalism, which made him rich, comfortable and famous. And he wants to kill it.

Elizabeth Warren, Senator from the Cherokee nation as well as Massachusetts, runs right behind Biden at 16%. Another Senator, Corey “Spartacus” Booker of New Jersey, cannot break 3%. Despite that polling gap, these two are yoked together. How? Both are known more for their anti-Trumpism than for their policy ideas. And both Warren and Booker portray themselves as moralistic, populist tribunes. So what better Shakespearean analogs for them than, well, the Tribunes in Coriolanus?

Sicinius Velutus has more lines, so let’s make him Warren. Junius Brutus, then, is Booker. Their schtick? They’re “supposed to represent the people’s best interests,” but in Shakespeare’s play, since they can’t stand Coriolanus/Trump, they “spend all their time plotting his destruction and downfall. In fact, they … run a smear campaign … and accuse him of acting like a ‘tyrant.’” When war hero Coriolanus is elected Consul, they pounce. Brutus/Booker: tell the people that “they have chose a consul that will from them take their liberties.” Velutus/Warren: “Let them assemble; And, on a safer judgement, all revoke your ignorant election” (Act II, scene 3). Impeachment, anyone?

These tribunes are Shakespeare’s versions of two dishonest yet wily labor leaders (John Palmer, Political and Comic Characters of Shakespeare, p. 259). And they correspond perfectly with Warren and Booker.

Sleeping Her Way to the Middle

Kamala Harris is a Senator from California. She’s in fourth place with 11%, having fallen back after her decent showing in the second Democratic debate. Some would fancy Harris the female protagonist of The Merchant of Venice: Portia. This woman is rich, attractive and smart. She disguises herself as a male lawyer and wins the play’s dramatic court case against Shylock. Before that, Portia’s dad had set up a trial in which suitors hoping to marry her had to pick the correct casket holding her picture. Two of them were wrong — much as Harris is telling America that Biden and Bernie are. Pick her instead, America! Be like Bassanio!

But Kamala Harris did not rise to the top of Democratic Party politics simply via her intellect. No, like Cressida she leveraged adultery. Back in the 1990s the Mayor of San Francisco, Willie Brown helped Harris to plum jobs and connections. While he still lived with his wife. But since Democrats are more tolerant of adultery than Republicans, this may prove a plus for Harris against Trump.

Pete Buttigieg registers at 6%, good enough for fifth place. The Mayor of South Bend is young (37), smart, gay and quite likeable. Did I mention gay? He does. A lot. Henry VI (who got three Shakespeare plays!) was young, smart and likeable, too. Just not gay. “The trouble is, while Henry’s totally a guy you’d want for a friend, he may not be the guy you’d want for a king… .” Ditto for Mayor Pete.

Buttigieg is also very pious — at least by his own, and the Christian Left’s, standards. Henry VI was very religious, too. But at least Henry had foreign policy experience — he didn’t vault from mayor of Oxford to the throne. Can anyone really imagine Mayor Pete sitting down across from Kim Jong-Un, much less Vladimir Putin, and being taken seriously? If Buttigieg were to get the Democratic nomination, President Trump would no doubt go Richard III on him in the general election.

Now to the Magical Donkeys

Bill De Blasio, Mayor of New York, finally showed up on the polls at 2%. He thus doubles up “Beto” O’Rourke, former Texas Congressman and failed Ted Cruz slayer. The best Shakespeare analog for both of these clueless liberals is Bottum, from A Midsummer Night’s Dream. Why? Bottum’s head was turned into that of an ass, making him the butt of jokes. So to with Bill and Beto. Yet neither has enough self-awareness to realize it.

There is one Democrat running for Congress who does actually speak truth to Leftist powers. That’s Hawaii Congresswoman and military veteran Tulsi Gabbard. In that, she reminds me of Paulina from The Winter’s Tale, who “has more guts than all the other characters combined.” Gabbard has questioned the wisdom of overthrowing the Syrian government. She supports calling Islamic terrorism what it is. And Gabbard accepts the Mueller report that Trump did not collude with Russia. All of these are reasons why she’s mired at 1%, and will never get the nomination in the modern, far left, Democrat Party.

None of the other Democratic candidates is above 0%. More’s the pity, because I really want to find a fitting character for Marianne Williamson! Hint: think Macbeth and a boiling cauldron.