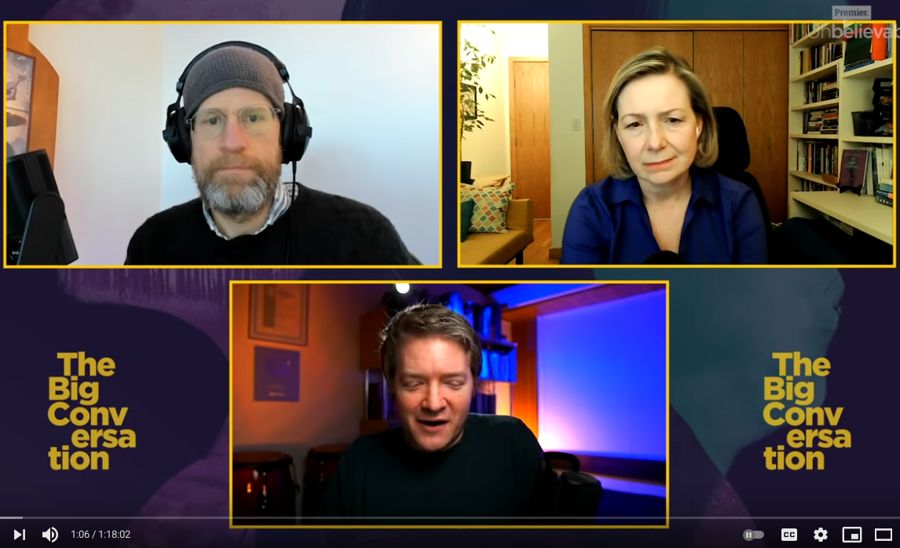 Justin Brierley’s Big Conversation video discussion on “God, AI, and the Future of Humanity” is sci-fi speculation at its non-fiction best. Are we some other super-intelligence’s computer simulation? Will artificial intelligence someday rule the world? Could we upload our consciousness to the cloud and gain immortality that way?

You’re forgiven if the words “cloud” and “immortality” evoke pictures of Sylvester the Cat or Wiley Coyote up in the sky on a cloud wearing a halo and playing a harp. Actually it really was a serious and worthwhile discussion.

Brierley’s “Big Conversation” series brings in world experts on various topics to talk about some of humanity’s most interesting and/or pressing problems. This one was on the future of Artificial Intelligence.

Rosalind Picard, an MIT simulations expert, was there representing a Christian believing view. On the other side of the table was Oxford University philosopher Nick Bostrom, a religious agnostic who made a splash in the popular press by proposing the maybe-we’re-all-just-a-simulation theory. For me it’s one of those rare ideas that are both obviously wrong and yet interesting enough to think about.

Could Artificial Intelligence Ever Reach the Point of Being Conscious?

More than anything, though, it was their conversation on Artificial Intelligence and human consciousness that struck me.

The question was whether some advanced AI could someday attain to consciousness just as humans are conscious. Bostrom said he could imagine that happening in some very advanced world of machine learning. The hard question that follows that one is, How would we know?

We’re part of the natural order, but as God’s image-bearers, there’s a piece of us that rises above it.

Philosophers have been batting that question around for some time now. Here in this discussion Bostrom imagines a computer so powerful, it could mimic every human behavior. As far as one could tell by looking at it, it would be thinking with human-like creativity and flexibility. It could mimic humans’ behavior, it could make reasonably sound moral judgments, and it could express and respond to emotions.

Beyond that it could work, play, and do all the same things on the outside that we generally take as signs that there’s a real human mind there on the inside. Its behaviors would be indistinguishable from a conscious human’s behaviors.

Then comes the hard question. You ask it, “Are you conscious?” and it says “Yes.” But is it?

What Does It Really Mean To Be Human?

Philosophers speak of the “zombie problem.” (Who said philosophy had to be boring?) The question in one version is, What if aliens came and zapped half the humans on the planet, making them unconscious yet still living human shells: zombies, that is? But these would be zombies who still talked, worked, played, and treated others exactly the same way they did when they still fully human.

In this story, you’re one of the true humans, but you can only wonder whether your spouse is. How would you know? And now for the truly disturbing question: What if the story were already true? What if those aliens actually came and did their zombie thing to half the world five years ago? What if your spouse was already a zombie, acting exactly like a real human. How would you know?

This is all too unlikely to contemplate, but that’s half the fun of speculative fiction. And it has very real value, for pointing out a very real problem: What does it even mean to be conscious? If some robot could act and emote and make art and plan for the future and worry about the past — as far as we could see on the outside, anyway — who are we to say they’re not as humanly conscious as we are on the inside? Maybe they’re just as much “people” as we are, and as fully deserving of respect and rights.

It’s still a thought experiment. It’s not at all clear that artificial intelligence could ever reach the level of mimicking human behavior that well. Still it shows us the philosophers’ paradox in a nutshell. We all know what it is to be conscious, but no one knows what consciousness is; that is, we can’t define it well enough to know for sure whether something else, or even someone else is truly conscious.

This is just one part of a problem that plagues philosophers these days. Some have gone the route of saying there is no difference: Not that rivers and hills are conscious entities, but that humans aren’t. Consciousness is an illusion, some say. Others say we’re so tied in to the natural order, human free will is an illusion, too. At least one philosopher, Alex Rosenberg, has concluded that human thinking itself is an illusion.

The Problem Secular Philosophy Gets Stuck On

And I’ll bet you thought there was nothing anyone could learn from philosophers’ speculations. Here’s one lesson you should draw: If you start in the wrong place, you’re certain to end up with the wrong answer. These thinkers who deny consciousness, free will, and even human thought are virtually all committed atheists.

I won’t tell you what I thought when I heard Alex Rosenberg say he thinks there’s no such thing as thinking.

There’s absurdity there, for sure. If consciousness is an illusion, who or what inside me is conscious of it? Were some thinkers forced by nature to conclude there’s no such thing as free will? If so, why should we think they reached that conclusion for reasons of logic? I won’t tell you what I thought when I heard Alex Rosenberg say he thinks there’s no such thing as thinking.

The strangest thing about it? They claim to be following science’s “objective evidence” about the way the world is. Whatever happened to the evidence that’s nearest at hand to every one of us: the experience of being human?

The Answer the Bible Offers

Judeo-Christian theism, in contrast, says humans are uniquely made in the image of the God. That fact gives us special worth in the world, along with special responsibilities. And it explains how we can be truly human: We’re part of the natural order, but as God’s image-bearers, there’s a piece of us that rises above it.

It’s still mysterious in ways that go far beyond the scope of this article, far beyond reach in any discussion. I doubt we’ll ever get past that. But at least it doesn’t force us into conclusions that deny our very humanness. Or that make us wonder whether machines can be fully human, or match humans’ worth in any way. They couldn’t; not unless God decides somehow to put His image on them, too. I don’t think we need bother speculating about that, though.