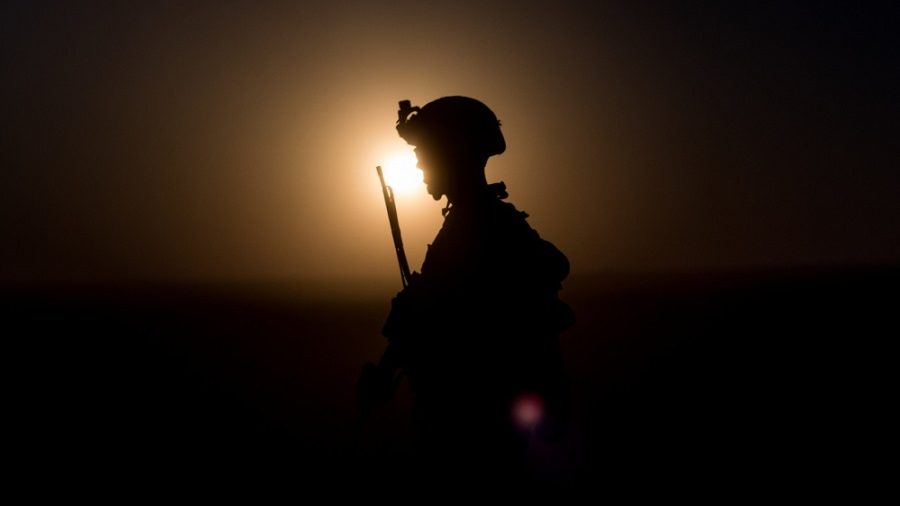 A U.S. Marine prepares to board an MV-22 Osprey near At-Tanf Garrison in Syria on September 7, 2018.

Phase Three of the U.S.-backed  “Operation Roundup” is well underway in Syria, where coalition troops are pounding remnants of ISIS along the country’s war-torn border with Iraq. The mission’s goal is to “to clear ISIS remnants from Hajin and the remaining Dayr Az Zawr countryside east of the Euphrates River.”

The latest available data from the Pentagon shows “66 strikes consisting of 102 engagements in Iraq and Syria” between September 10 and 16. Sunday in Syria, coalition troops destroyed an ISIS command and control center along with a terrorist improvised explosive device facility near Abu Kamal, according to the Department of Defense.

On the same day in Iraq, the Pentagon said an ISIS bunker and vehicle shelter were destroyed by coalition forces in al Asad.

While U.S. troops are also making sacrifices on the homefront during Hurricane Florence rescue and recovery efforts, media coverage of the ongoing fight against terrorism seemingly vanished – again – shortly after the 17th anniversary of the 9/11 attacks. With thousands of American service members risking their lives around the world, we must force ourselves to pay attention to their extraordinary efforts, no matter what’s going on in our daily lives.

We owe everything to these selfless warriors and their families.

The first two identities of fallen Korean War heroes whose remains were recently returned from North Korea were publicly identified in a Thursday afternoon tweet by President Trump.

Please keep the McDaniel and Jones families in your prayers.

Some of the ongoing war in Afghanistan’s newest heroes were honored this week at Fort Carson in Colorado. The September 16 ceremony recognized the courage of Green Berets from the 19th Special Forces Group during a combat deployment last year.

“At this time in history, these warriors epitomized what it means to be a Green Beret,” said Maj. Gen. Michael Loh, the Adjutant General of the Colorado National Guard. “The United States of America fields the finest fighting force in the world, and Bravo Company demonstrated that on the field of battle.”

One Silver Star, five Bronze Stars for valor and “several Purple Hearts” were awarded to Green Berets who fought numerous bloody battles against ISIS and the Taliban while stationed in Afghanistan.

While in Afghanistan, the unit sustained the tragic loss of U.S. Army Sgt. Aaron Butler, who made the ultimate sacrifice on August 16, 2017, and “has been recommended for the Silver Star.” You can read more about Sgt. Butler and his remarkable Gold Star family in this recent Salt Lake Tribune article.

After spending several months in Afghanistan, airmen from the U.S. Air Force’s 317th Airlift Wing made a rousing return this week to Dyess Air Force Base in Texas. As you can see below, the returning airmen were greeted by overjoyed loved ones. A crowd of U.S. Air Force families and friends cheer as they watch a C-130J Super Hercules bring airmen home from a deployment to Afghanistan at Dyess Air Force Base in Texas on September 17, 2018.

This Week at War: Pray for Our Troops