Weak Candidates, Strong Leaders, and a Determination to Not Settle 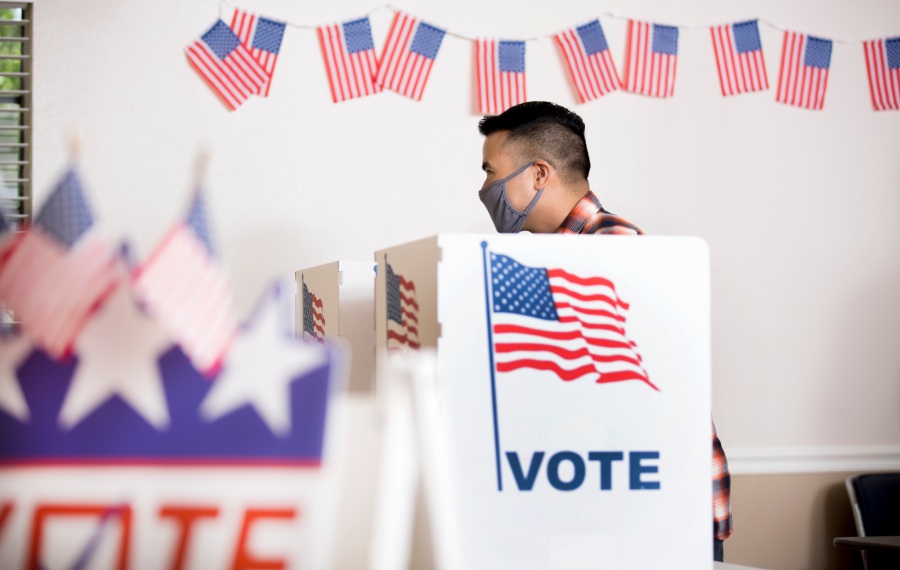 Many are already lamenting the “red wave” that was not much of a trickle. We still don’t know yet the fate of the Senate, but it is looking more like a toss-up every moment for Republicans. Today, it looks like Republicans will take the House of Representatives, but it will be by a very narrow margin – one that many didn’t anticipate being so close.

John Fetterman — the Democrat who had a visibly difficult time articulating his positions during his debate and is aligned with the far Left — won a Senate seat in Pennsylvania.

Though with so many votes left to count it’s possible he could pull it out, Blake Masters will most likely lose a Senate bid to flip a seat in Arizona that most Republicans were hopeful to win. We didn’t elect some great Christian House candidates around the country, including Esther Joy King, Oral Roberts University graduate and army reservist (IL-7), Jennifer-Ruth Green, former USAF Commander (IN-01), and Mayra Flores, who won a special election this year (TX-34). All lost despite great funding, much prayer, and perseverance.

Congressman Lee Zeldin, Republican from New York, ran hard to wake up New Yorkers to keep their state safe from crime against a candidate who just wanted to talk about abortion “rights” and taking away guns. Governor Kathy Hochul won her first full term there in New York even still.

Gretchen Whitmer, incumbent Governor in Michigan, also won re-election despite her draconian measures surrounding COVID protocols — among some of the worst in the nation.

Even more troubling, Kentucky voters rejected a constitutional amendment that said there was no right to abortion on a state level — giving a shocking victory to abortion “rights” activists in a southern state. Also, three other states affirmed unlimited abortion — Michigan, California, and Vermont.

Now that the Life issue has moved to the states — it looks like the people in those states who believe in protecting the unborn are not activated enough.

The referendum that appears to be voted down by voters that breaks my heart the most is one in Montana. This referendum would protect an infant “born alive” at any gestational age – as a legal person. This protection already exists under federal law, but the Montana voters are voting against protecting these precious lives by 52 percent.

This bad news doesn’t even address the states that have now legalized marijuana use — Maryland and Missouri. Colorado also thinks that legalizing psychedelic drugs is a good idea.

We have a Leadership Problem – Weak Candidates

My first thought for Christian voters as it relates to these Midterms is this: We have a leadership problem in these political and government spaces. As a former political consultant for over 16 years, it is a message I have preached for years that I will continue to articulate and hopefully through my life raise up more people of faith to take on these challenges in government.

Republicans put up some of the weakest candidates in the battleground states that really matter. Let’s go through just a few: Dr. Mehmet Oz in Pennsylvania (who lost to John Fetterman), Hershel Walker (who will be going into a runoff against a progressive leftist former pastor Raphael Warnock) in Georgia, and Blake Masters in Arizona (a venture capitalist who had no previous elected experience).

These candidates might have the right heart to serve their nation, but they don’t have the governmental resumes to run for the U.S. Senate against candidates with experience in governmental realms. Even though some of the candidates on the other side are also weak, the GOP can’t run a weak candidate against them. Being a good leader in business or another realm doesn’t translate into voters believing in them for a government position. President Trump was an anomaly — not a rule. Voters expect candidates to have knowledge and experience that translates to the job they are applying for.

In my professional opinion as a former political consultant, President Trump should have never hand-picked and endorsed these candidates in the primary. He should have let the process play out and let the activists, donors, and primary voters decide in crowded fields who they thought were the best leaders in their respective states. The result of these rash decisions resulted in these candidates gaining their party’s nomination by small margins, as Dr. Oz did by just a few votes.

Then the problems got worse in the general election. It played out in Pennsylvania and Georgia where GOP voters had to hold their noses and vote for these candidates or do what many did — they voted for the Libertarian candidate instead.

Because of votes given to Libertarian candidates versus the Republican candidates — these voters gave the victory to Fetterman in Pennsylvania and caused Walker to end up in a run-off instead of Republicans winning outright like what happened with Georgia Governor Brian Kemp.

Strong Leadership on Display in Some Areas

Leadership was on display and strong candidates outperformed in some areas of the nation like in Florida when Governor Ron DeSantis beat the now Democrat former Republican Governor Charlie Crist by nearly 20 percentage points. DeSantis also had a major Florida pick-up for the GOP in Congress with Anna Paulina Luna in FL-13 taking that seat and the Governor also won is Miami-Dade County — a Democrat stronghold of Florida.

Sarah Huckabee Sanders became the first woman elected to Governor of Arkansas after working in politics for years running her father’s campaign for President and then becoming the press secretary for President Trump. She showed the nation that a Christian woman who remained faithful to the call of God on her life in government could make a difference. Also, Arkansas voters pushed back on legalizing cannabis in their state with her at the top of the ticket.

Senator-elect Ted Budd, a Dallas Theological Seminary graduate with a strong conservative record from the U.S. House, won a close race in the state of North Carolina — a state that continues to trend leftward.

These stories are three bright spots in a mixed Midterm election for Christian voters.

Christians Are Still Too Apathetic

At first glance, it appears that Bible believing Christians are still too apathetic. We have a lot of work to do, as people who care about good governance, to wake up the Church.

Midterm elections still don’t receive the same level of attention by voters as elections do in Presidential election years. Christians must start voting in EVERY election (go ahead and take the pledge now) and take responsibility for our nation, or we are going to continue to have long-term problems in our communities. We don’t have the numbers yet on Christian involvement during these Midterms, but I guarantee it is much lower than we anticipated.

As Christians stand up, educate themselves, and run for office — there are miracles that happen. For example, a Texas victory story: LJ Francis, a strong Christian in Corpus Christi, member of Calvary Chapel, felt a burden from the Lord and decided to run for the Texas State Board of Education in the 2nd District that covers 14 counties in South Texas. He was down over 5,000 votes when early voting numbers came out, but by the end of the night — he had won to by just 1,665 votes to advocate for Texas families. A man who had never run before — worked hard, learned the job, learned campaigning, and with a solid team won. He didn’t start out by running for the U.S. Senate — he ran for a School Board seat that was on the fence and that needed strong leadership. He stepped into a leadership crisis the right way.

We Must Study our Bibles

My last comment on the Midterms is this: Many Christians don’t study their Bibles and don’t know how their faith intersects with public policy issues. Therefore, ministries like The Stream and Christians Engaged are so important and need to be supported — we can’t stop. We can’t be discouraged. We must start again teaching the Word of God and educating Christians to get involved.

It astonished me over the last few weeks when a Christian leader Pastor Creflo Dollar in Georgia spoke about the pro-abortion, pro-LGBTQ candidate Stacey Abrams “I want to see how this sounds – Governor Stacey Abrams” then he goes on to talk about voting as people in his congregation cheered loudly, “You already know what to do, right?” This was high profile “leader” in the Body of Christ promoting a candidate that advocates for unbiblical positions.

The level of biblical illiteracy among self-professed Christians in this nation is astounding. Christians who go to church each week are using the argument that God gives us the freedom to “choose,” so therefore we should affirm abortion as a “right.” They are misguided. Their argument is to give people the “right to choose” without any thought to how God loves that pre-born baby that He formed in that mother’s womb or that baby’s right to LIFE.

This must change – we must study our Bibles with diligence.

If this Midterm election has showed us nothing else — it has showed us that we need Christians in America to dig deep in the Word of God, in prayer, and in worship. We need strong Christian leaders in the pulpits of America. Revival needs to start with us.

We need Christians who will not be afraid to get their hands dirty in government and politics — but who can live out their faith every day in front of a hostile society. We need strong consistent leadership across our nation from our cities, our counties, our states, and in Washington DC.

The leadership that can win in the future has to establish government credentials and understand the jobs they are signing up for. They need to be people of integrity with a strong moral compass.

We must demand stronger leadership in this nation, not weakness.

We can’t settle for the mediocre, and we can’t listen to the voices who are pushing weak leaders regardless of their national influence. We need to use discernment and search for truth even when we are listening to “prophetic voices” or political, business, or media leaders who have the ears of millions of Americans.

We need to be stronger leaders ourselves who seek God and educate ourselves on the issues of our day and the processes and systems that we want to change.  We can’t settle. We need to be determined that we will be the leaders who will impact America.

Bunni Pounds is president of Christians Engaged.- activating the Body of Christ to pray, vote, and engage regularly. She is a former congressional candidate, a former 16-year political consultant, motivational speaker, and preacher of the gospel.

After Kansas: The Future of the Pro-Life Movement

Could This British ‘Transgender’ Murderer Save Our Sanity?