As long as it's artistically done 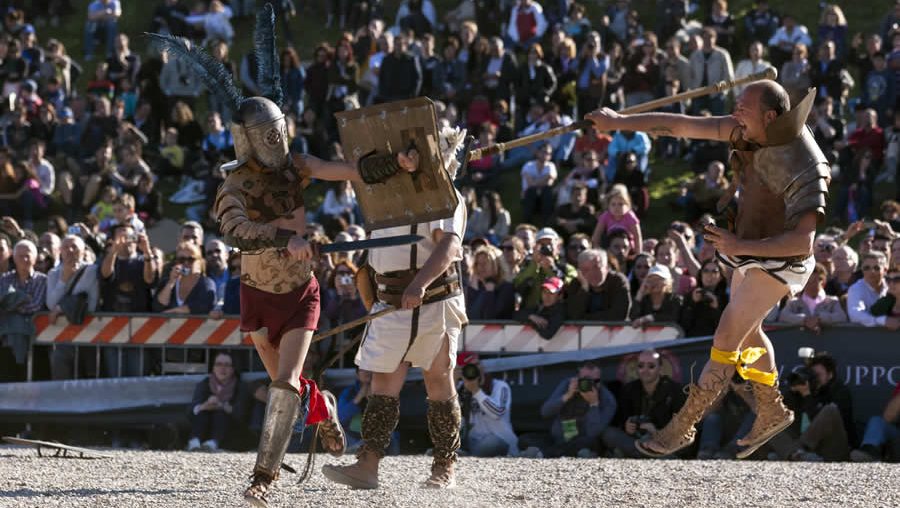 Impulses suppressed when Christianity reigned are bound to reappear as Christianity wanes. Bloodlust is one of these passions.

Romans before Christianity watched as gladiators killed each other, the crowd hoping for good sport and dignified deaths. Execution of state enemies opened the proceedings to set the right tone and whet appetites. Even with this prompting, fighters sometimes had to be prodded by hot irons to remind them of their duty. Animal hunts with men as hunters and hunted were also popular.

People enjoyed these sports. They cheered as victims were ripped open, stabbed, or had their throats slit (often to ensure deaths weren’t faked). Since many of the “contestants” were condemned criminals and would anyway have been executed in mundane ways, why not have some fun with them? Besides, many gladiators were volunteers, the celebrated performers of their day.

Why not have these contests now? After all, why shouldn’t consenting adults be allowed to do what they want? And to charge admission for it? Consenting adults killing each other does no harm to anybody else. It would seem to provide a sort of catharsis for audience members. They can have their lust for anger and murder assuaged in the ring, where it is controlled, and keep it from spilling out onto the streets.

The Church Father Who Denounced Gladiatorial Games and Circuses

The Church Father Tertullian didn’t think so. In about 200 AD he wrote a profound and compelling argument condemning bloodsport. In De Spectaculis he castigated Christians for attending gladiatorial games and circuses. “The servants of God are directly forbidden to have anything to do with such assemblies!” he wrote.

The reasons Tertullian gave for this condemnation were enough to convince his brother Christians to abandon the arena and take up gentler pursuits. His and similar admonishments have held for some 1,800 years.

That was then. Who remembers Tertullian’s arguments today? We don’t have now, or yet again, live action killings. Maybe we don’t need to, given the astonishing advancements in cinematic technique. Torture, killing, dismemberment, and so forth can be made to seem so realistic it’s almost as if you were there. Slaughter is now art.

Art was the goal of pervert director Lars Von Trier, the man responsible for Antichrist (in which genitals are shown being shredded) and Nymphomaniac. His new movie is The House That Jack Built. (This is only one example of an increasing number.) It is reported that when it was shown at Cannes, scores walked out.

Even jaded critics well used to sick screen sights had too much. One called the movie “vomitive.” Another said “Vile movie. Should not have been made. Actors culpable.” Women and children are “brutally — and graphically — murdered” and then mutilated (descriptions can be found by simple searches, but I won’t link to them). “The Danish director said the new movie is his most violent film to date — and he’s proud of that.”

One critic wrote, “Lars von Trier is a stupid, arrogant troll.” The audience groaned. Von Trier said the walkouts and groans “made [him] very relaxed.”

Another Roman parallel: Animals were also tortured and mutilated in the movie. It was so bad that PETA was forced to issue a statement.

They approved of the scenes because they were only simulated.

Not everybody left. Those who stayed gave von Trier a standing ovation. They liked what they saw. The carnage was the enjoyment and pleasure of this audience.

Critics at Rotten Tomatoes are split (as of this writing) 50-50. Those who hated it were repulsed by the violence. Those that found pleasure in the blood called it art and used phrases like “stimulating discomfort” and “disturbing poetic awe.”

No critic I found said (aloud) they liked the blood for the sake of the blood, an absence which is telling, and which proves the remnant of the old Christian morality is still in place. But that any critic admitted liking the movie at all is equally telling.

Tertullian said of those tempted by the games (my emphasis):

For even suppose one should enjoy the shows in a moderate way, as befits his rank, age or nature, still he is not undisturbed in mind, without some unuttered movings of the inner man. No one partakes of pleasures such as these without their strong excitements; no one comes under their excitements without their natural lapses. These lapses, again, create passionate desire. If there is no desire, there is no pleasure, and he is chargeable with trifling who goes where nothing is gotten; in my view, even that is foreign to us. Moreover, a man pronounces his own condemnation in the very act of taking his place among those with whom, by his disinclination to be like them, he confesses he has no sympathy.

The opposite is also true. Where there is pleasure, there is desire.

Rambo: Last Blood — a Movie for Dads and Sons?