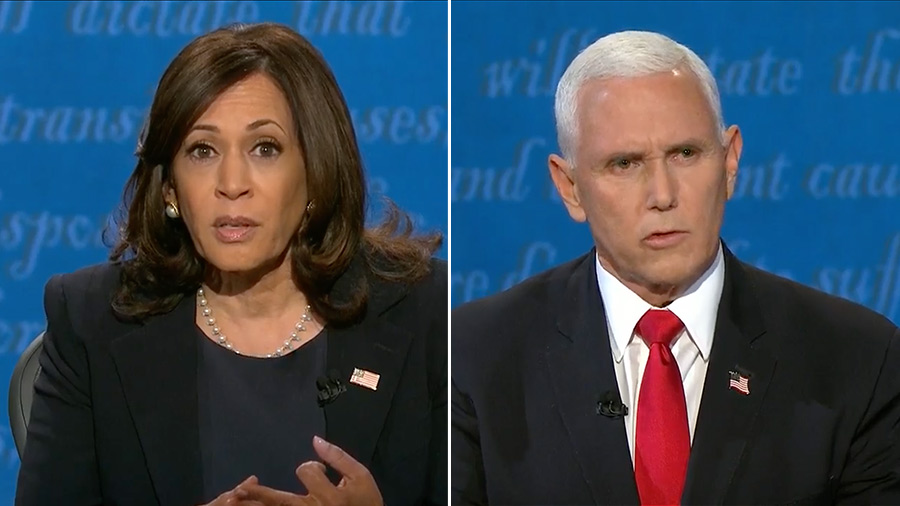 In fact Swiss clockmakers couldn’t dismantle a watch with the precision and effectiveness Pence did Harris. It was a dissection so methodical they should have held the debate in a biology lab.

And Harris? Ugh. The rolling eyes. The smirks. The facial expressions. The snottiness. The weak, canned answers. The embrace of higher taxes and Green New Deal and cash bail. Her refusal to answer whether she’d pack the Supreme Court. Her desperate flinging of every false Trump meme imaginable, including the Charlottesville Hoax.

Making Kamala’s defeat even more astounding: Moderator Susan Page of USA Today made sure virtually every single question was either directly out of the liberal wish list, or was weighted against the Trump-Pence Administration.

How lopsided was this debate? ACTforAmerica summarized it best.

Even the fly chose Mike Pence instead of Kamala Harris.

Yes, a fly landed on Pence’s head. The fly connected on Pence more than Harris.

Naturally, Page served up COVID as Harris’ first question. After all, COVID was supposed to be where Harris would nail Trump and Pence to the wall.

Nail? It was barely a tickle.

She claimed Trump didn’t properly warn people at the end of January of the dangers of the virus. (I don’t know about you, but in late January, I was watching countless videos of Chinese body bags. Police soldering doors shut. People dropping like flies. What was Trump going to say that we already didn’t know? And all this while Kamala and friends were having their Impeachment trial.)

However, when it came to what Biden and Harris would do different, their plan was little different than what is already happening. Pence said their plan “looks a little bit like plagiarism, which Joe Biden knows something about.”

He quoted what the revered-by-the-left Dr. Fauci said about the White House response in March.

Pence pointed out how the lies China and World Health Organization told about the virus hampered our response. He repeated how Trump’s shutdown — called xenophobic by Biden — saved countless lives.

When Harris talked about the alleged failure of America’s COVID response, Pence parried, saying she was doing a “disservice to the American people.” He spoke of the sacrifice of Americans, the intensive actions taken, and the amazing job Operation Warp Speed is doing to bring therapeutics and soon vaccines.

When asked if she would take a vaccine, Harris got snotty. “If Donald Trump tells us that we should take it, I’m not taking it.”

Then Pence flattened her. “The vaccine will have the capacity to save millions of lives … Your continuous undermining of a vaccine in America is just unconscionable!”

Then he went for the kill.

He told the story of Biden’s response to Swine Flu when he was VP. “We actually do know what failure looks like in a pandemic,” Pence said. “Not 7.5 million people contracted the swine flu. 60 million Americans contracted the swine flu. If the swine flu had been as lethal as the coronavirus, in 2009, when Joe Biden was Vice President, we would have lost 2 million American lives.” He told how Biden’s own chief of staff “would say last year that it was pure luck. That they did ‘everything possible wrong.’”

When Pence managed to turn COVID against Harris and Biden, you knew Harris was in for a long night.

Pence kindly reminded Harris that Biden did tell a voter he “absolutely” would ban fracking. And let’s remember Harris herself said in March 2020, “There’s no question I’m in favor of banning fracking.”

Pence put the simple question to Harris: Will you pack the court?

Harris refused to answer. Repeatedly. So we know the answer. As Pence said, “This is a classic case of if you can’t win by the rules you’re going to change the rules.”

One of the most powerful … and cutting moments … came when Pence talked about Kayla Mueller, executed by ISIS after being held hostage for 18 months. Pence relayed the news that two of her killers were brought to justice today.

Then he shared how Obama and Biden knew where Kayla was, but waited a month to act. And they were too late. She had been moved. Said Pence, according to Kayla’s parents, “If Donald Trump had been president, our daughter would be alive.”

He also reminded America that Biden had been against the raid that killed Osama bin laden.

On foreign policy, Harris was in so over her head, the Coast Guard had to be sent out to find her.

Page tossed another softball to Harris, “Was justice served in the Breonna Taylor case?” Harris said no, then rambled over to the George Floyd case. (Why no questions about urban violence, or leftist rioting … even as another city was seeing violence tonight.)

Pence first hit Harris for blocking prison reform. Sen. Tim Scott was working out a bi-partisan police reform bill, but “you walked out of the room.”

Later he would return to the Breonna Taylor case. “As a former prosecutor, I’m surprised you would assume a grand jury would be wrong.”

Pence was set to demolish Harris over her dubious record as prosecutor, but Page cut him off.

Pence launched into Harris for her opposition to a judicial nominee simply because he was a Catholic member of Knights of Columbus. And his hope Amy Coney Barrett won’t be subjected to “the kinds of attacks on her Christian faith that we saw before.”

Harris with planned indignation, said, “Joe Biden and I are both people of faith, and it’s insulting to think we would knock anyone for her faith.” Oh, but Senator, you already did.

Even though Biden was advised by Hillary Clinton not to concede under any circumstances, Page only asked Harris and Pence about Trump’s refusal to promise he’d accept the results of the election.

Thankfully, Pence responded to Harris, “Your party spent the last 3 years trying to overturn the results of last election.” He forcibly laid out how Obama-Biden had spied on “our campaign,” the impeachment “over a phone call.”

Harris was floundering and failing. The scripted answers weren’t enough. So she dug up almost every false Trump cliché in the mud-caked book. His first act in office was to institute a “Muslim ban.” He called all Mexicans “rapists and murderers.” On and on. You know the drill by now.

She trotted out the “He didn’t condemn white nationalists at the debate” card. (Trump saying “Sure” three times, before being interrupted, did not count.)

She sunk into the gutter with the evil Charlottesville Hoax, claiming Trump said white nationalists are “very fine people.” Pence pounced, denouncing her and the media for ignoring what Trump actually said.

She repeated the lie Trump called COVID a “hoax.” He said the Democratic/MSN hysteria over COVID was a hoax.

Harris also flung the lie that Trump called our World War I dead “losers” and “suckers.” Dozens of witnesses are on record denying it happened.

Earlier, she went tin foil hat with this bizarre notion that because real estate mogul Trump owes $300 million dollars, he is thus beholden politically to those he owes. (That’s owing $300 million … on a building worth $450 million.) Of course, she ignoring the $1.5 billion China gave Biden’s son, while Biden was VP.

She brought up the $750 in taxes Trump paid two years ago. Ignoring the fact Trump actually paid over $5 million in taxes those years, but a tax credit for saving the historic Old Post Office wiped that out. And rather than get the money back, Trump applied it to future taxes.

Speaking of taxes, she repeatedly lied by claiming Biden would not raise taxes on the middle class. Pence kept reminding viewers Biden promised to trash the Trump tax cut on day one. A tax cut that put thousands in the pockets of the middle class.

90 minutes on the stage and all she had to offer — this woman who is already talking about the “Harris Administration” — is, in essence, a false portrait and Orange Man Bad.

Which Do You See in the Oval Office?

Given Trump’s COVID diagnosis and Biden’s clear cognitive issues, we had to watch this debate through the lens of “Which of these candidates can you see in the Oval Office?”

Kamala Harris demonstrated why Democratic voters so quickly and thoroughly rejected her. (And frankly, why she’s been kept from answering any real questions during the campaign.) She’s unlikable and offers nothing but platitudes and blind ambition.

Mike Pence gave a textbook demonstration of how to be in charge, informed, in control. How to take a political opponent apart, all while maintaining grace.

President Trump says he’s learned a lot from his COVID battle. He can learn a thing or two from the man serving at his side.