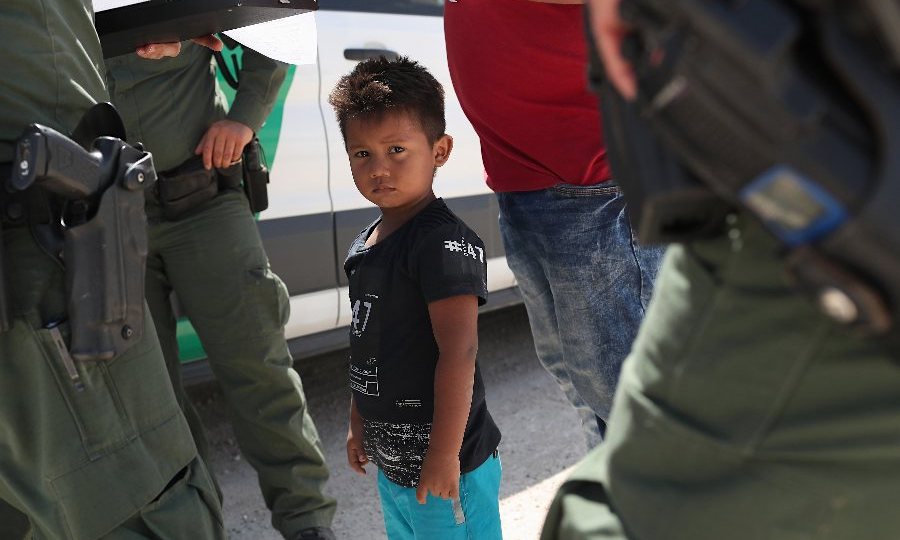 In this June 12, 2018, file photo, U.S. Border Patrol agents take into custody a father and son from Honduras near the U.S.-Mexico border Mission, Texas.

I recently accepted an invitation to visit the U.S./Mexico border at McAllen, Texas, hosted by the Department of Homeland Security.

It is the largest and busiest crossing along our 1,800-mile shared border with Mexico. More than a thousand migrants a day are attempting dangerous illegal entry into the U.S. through Mexico.

Most of them are from Central America and some from Mexico, but not all. Captures have been made from more than sixty countries of origin, including China, Syria, and Afghanistan — which causes obvious concerns.

Our group of faith leaders was led on the same all-access tour offered to members of Congress, into places that the public cannot access. It was a deeply moving experience.

Border Patrol agents are genuine heroes. Few of us can imagine the thankless job they do every day.

During a ride-along with Border Patrol that passed near the Rio Grande River, we were shown the well-worn path to the border crossing. Then we were taken to the Detention Center for those apprehended.

Sorting Out the Criminals

A large open warehouse-style building, this center was purchased by the government in an attempt to keep up with the surge of those crossing into the country. This is the place where the so-called ‘cages’ that made headlines are located.

The large warehouse has been fitted with high chain-link fence dividers. This allows the sorting of those picked up and a visual line of sight across the expanse for security.

There were hundreds of every category. More than 1,500 were there when I went through. It seemed crowded to me, but I was told, ‘We can hold 500 more to be at capacity.’ The building was clean, well-organized, and well used.

As I looked across the room, I was amazed at how quiet it was. Almost everyone was asleep. Some who seemed anxious sat on benches staring out at us as we passed by. No one talked. It didn’t hit me until I walked past the children’s area. I couldn’t help but weep. It was spontaneous.

There were hundreds of children from about ages 3 to 15, lying side-by-side on mats on the floor. To cover their bodies as they slept, they used silver Mylar for blankets. It was an exhausted, silent sleep.

I could only imagine the journey they had just completed. The detention facility is a place to sort, feed, shower, provide fresh clothes, and process the daily intake. It is usually a two to three-day ordeal. They are then dispersed.

When I say ‘dispersed,’ it can mean several things. They may be awaiting a hearing in front of a judge regarding their asylum case. The wait can take up to four years.

It can also mean being released to a non-profit such as Catholic Charities, who attempt to find them a path to survival. Or they may be sent back to their country of origin.

The Need for Action

Since my visit, I have experienced a rush of emotions — from sorrow to outrage. I’ve been working since to settle and sort out my feelings and start to work on solutions.

I learned a lot on this trip. Some things brought comfort while some brought deep concern. There is plenty of blame to go around, but let me place it where I think it belongs.

In Praise of Border Patrol

For anyone who visits the border and sees the work happening, it is clear that Border Patrol agents are genuine heroes. They bear no blame for the crisis. Few of us can imagine the thankless job they do every day.

They are caught between two warring drug cartels fighting for border control in the region. They are daily crawling through thick brush along the river.

More often than not, they rescue someone attempting to cross who has been abandoned by the smuggler they paid up to $8,000 to escort them.

Typically, the migrant sold all they owned to be escorted—and, if it wasn’t enough, they would become indentured servants to the smugglers until it is paid.  No one crosses the border who doesn’t pay the cartel. They control the border like the mafia, and they are brutal.

Border Patrol agents spend 40 percent of their time on duty caring for children at the detention facility. Changing diapers, feeding, and bathing babies are a part of their daily tasks.

Some of them brought toys, books, DVDs, and bedding from their own homes to help make it more comfortable for the children.

Shockingly, Border Patrol agents are among the lowest paid of any level of law enforcement. Those who attempt to enforce the law on the Mexican side of the border suffer too. Most who are hired are killed within days by the cartel.

At the national level, I now believe Washington must act. Congress has not addressed immigration reform in three decades! Nothing has been done since Ronald Reagan’s presidency.

Congress must create a new, fair, and comprehensive immigration bill that addresses the desperate crisis which exists at our southern border.

I have respect for those who serve faithfully in Washington, but it is time for the partisan politics to end on this issue. I urge everyone to tell your Congressman to take action on this humanitarian disaster.

They must create and fund laws that stop the criminals and process those good people who only desperately want a chance at a better life.

My purpose for going on this trip was two-fold. First, to see the truth, whatever it was, with my own eyes. Second, to establish connection with local church pastors that could provide channels of assistance. I accomplished both.

The reason there are so many children crossing is because of a loophole in our laws being totally exploited by criminals.

It is called the Flores Amendment, put in place under the Clinton administration in 1997. Simply stated, immigration officials are not allowed to detain a minor more than 20 days. The smugglers know that, after 20 days, the minor and any adult with them will be released.

If you arrive with a child, you will be released. If you have no criminal warrants, in a few days you’ll be released. Not sent back to your home country, but released into the U.S. to make a new life.

So children are rented, kidnapped, and used to accompany a stranger crossing the border. Smugglers then take them back to do it all over again.

Fifty percent of all the women crossing have been raped and abused by criminals who control the immigrant industry. Billions of dollars annually flow to the drug and human trafficking monopoly they have built.

The immigrants I talked to through an interpreter said, “I am happy. I am safe now. I have been treated well here, and I’m hopeful of a new life.” I believe our brave agents at the border are doing all they can to fight a war they cannot win.

The Church Must Be the Church

I have not answered every question on this very complex problem in this brief update, but it is a start. In Leviticus 19:33-34, we read where God said to Moses:

“When a foreigner resides among you in your land, do not mistreat them. The foreigner residing among you must be treated as your native-born. Love them as yourself, for you were foreigners in Egypt. I am the Lord your God.” As the Church, we have an obligation to provide compassionate ministry to those who arrive among us longing to be free.

On an encouraging note, we were able to make strategic connections with local pastors. Surrounding McAllen, there are more than 1,000 Colonias which are neighborhoods of cardboard and plywood shanties. These house people who crossed and only made it a few miles.

We will open Dream Centers to reach out, educate, feed, and love those in great need. Moving forward, we will work together to design a program of support and volunteers to minister to the humanitarian needs.

This is about being the hands and feet of Jesus to those in need.

Local pastors and churches, often lacking resources themselves, will provide the ‘boots on the ground’ for this effort to bless the border.

We across the nation, through our network, will support them to carry out the work. They are willing and excited to lead it, and we at Center for National Renewal are thrilled to support it.

To sum up the plan moving forward, we will be partnering in relief work with pastors, churches, and ministries at the border. Trusted leaders will help us learn more and speak out about this crisis.

I hope you will join me in praying for those in need and for those responsible for governing to act, and for those of us who can help to be strengthened in resource and resolve. I believe we will make a difference—in Jesus’ name.

PRAY for Congress to act, the Border Agents to be strengthened and encouraged, pastors/churches in the area to be resourced, and those who have migrated to be treated with wisdom, dignity, and charity.