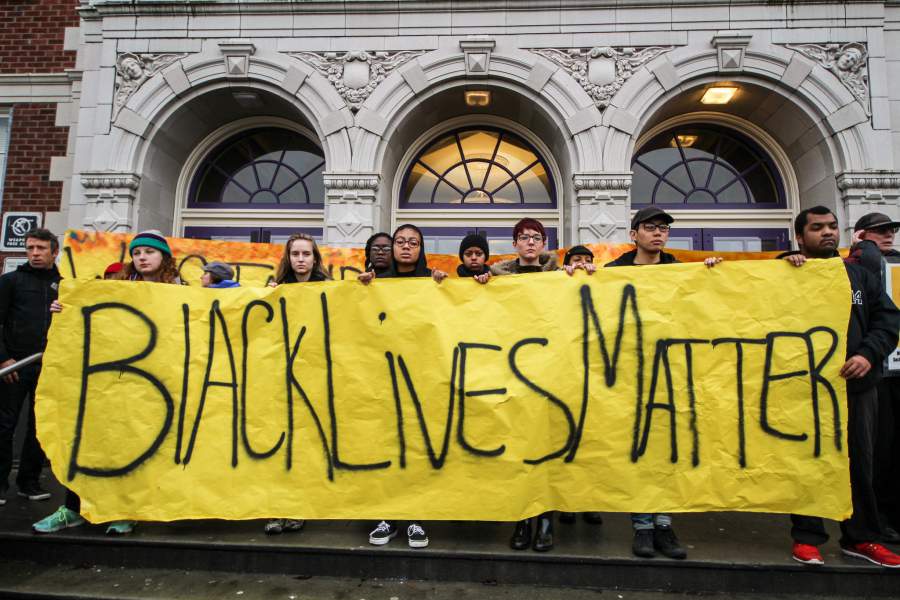 NEW YORK — When it came time for Darren Wilson to testify about what happened after firing his gun from inside his vehicle, the Ferguson, Missouri, police officer told the grand jury that his assailant “had the most intense, aggressive face.”

Wilson, then 28, is the white police officer who fatally shot Michael Brown, an 18-year-old black male on Aug. 9, 2014, in Ferguson, a northern suburb of St. Louis.

It’s all part of the stage play performance of Ferguson, which ran from Oct. 23 through Nov. 5 at the 30th Street Theater, located between 7th and 8th avenues in New York City, and makes use of a storytelling technique known as “verbatim theater.”

The Advantage of Verbatim Theater

All of the play’s dialogue is taken verbatim from the 25 days of  grand jury testimony. Phelim McAleer, the Irish-born filmmaker and investigative journalist who wrote the play, has launched a crowdsourcing campaign to help finance the play’s production, which expired on Nov. 9. If enough funds are raised, the play could be restaged.

“This is as much about journalism as it is about the activists involved with the Ferguson incident,” McAleer told The Daily Signal after the Saturday afternoon performance of the play. “This is about checking primary sources and looking into what these people actually saw and not what they said they saw. That’s something many journalists failed to do.”

The media narrative built around the widely reported “Hands up, don’t shoot” scenario that fueled protests from Black Lives Matter and other groups directed against the police was contradicted by key witnesses and by physical and forensic evidence, according to what the grand jury heard. The confrontation between Wilson and Brown “took place over an approximately two-minute period of time at about noon,” according to a U.S. Department of Justice report on the shooting. Brown had stolen several packages of cigarillos from a nearby convenience store a few minutes earlier and had strong-armed the store clerk when the clerk tried to stop him, the report explains.

Wilson’s radio transmissions and dispatch records make it clear that he was aware of the robbery and had a description of the suspects.

The police officer first encountered Wilson and his friend, Dorian Johnson, 22, when they were walking eastbound on Canfield Drive in the “middle of the street,” according to the Justice Department report.

After Wilson noticed that Brown had cigarillos in his hand and that Johnson was wearing a black shirt, consistent with the description he had of the suspects, the police officer reversed his vehicle and then angled the vehicle to cut Brown and Johnson off in the street. That’s what Wilson told prosecutors and investigators, that’s what he said in his testimony to the grand jury and that’s what it says in the Justice Department report.

Of all the witnesses, McAleer said he was particularly impressed by Ciara Jenkins, a young black woman, who was positioned behind Wilson and Brown in the moments leading up to the shooting.

“What she delivered was just incredibly powerful,” McAleer said. “She had been avoiding the subpoena and didn’t want to testify, but when she did, she said Michael Brown did not raise his hands to surrender and that he charged the officer. This is a very intense, emotional part of the play. But that’s what’s in the grand jury testimony, and the media did not tell the truth about what happened.”

Ferguson is a 90-minute courtroom drama unfolding in one room on stage with 13 actors and with some of those actors playing multiple roles.

A staged reading of the play was first presented in 2015 in Los Angles, but nine of the cast members walked out in protest over the script. None of the New York City cast members walked out, but the Saturday afternoon performance did not escape controversy. A representative from the Community College of Philadelphia had contacted McAleer to see if accommodations could be made for about 50 students. McAleer obliged, but he was informed on Saturday morning that almost all of students had decided to back out at the last minute.

The Irish playwright explained what went down in an email that was sent to The Daily Signal and other interested parties. “I was really excited, and so were the cast, so I organized a group discount and a Q&A afterwards with the cast and myself so we could all discuss the issues raised by the play,” McAleer said in his email. “I thought the students would really benefit to hear verbatim what went on in the grand jury room during the Michael Brown investigation. In the end, 53 tickets were booked — almost all the house.”

A handful of students from the college did show up individually.

In the email McAleer received from the college’s representative, he was informed that “almost all of the students decided not to come because of the controversy surrounding the play,” he explained in his own email commenting on the incident.

“Don’t forget Ferguson is verbatim theater. It creates the drama using only actual words from the grand jury transcripts,” McAleer continued. “That is what these snowflake students were afraid of — the actual words of eyewitnesses — and many of these witnesses were minorities.

“What kind of country is this where students are scared of the ‘controversy’ created by the verbatim recreating of minority voices?”

The Daily Signal contacted the college representative who had been in touch with McAleer to ask if he wanted to comment for this article, but the representative did not respond.

Brown was under the influence of marijuana at the time of his confrontation with the police officer, a forensic toxicologist told the grand jury.

“I can tell you the drug is present at a significant concentration that represents a large dose into Mr. Brown,” Dr. Brian Wilcox said in his testimony. “How he would have behaved and what he would have done, I cannot predict. I know the drug was having an effect and was impairing his nervous system.”

Ian Campbell Dunn, a native of Nashville, Tennessee, played the part of Officer Wilson. He poured a lot of emotion and intensity into his performance and even stepped off stage and into the audience during the climactic, final moments of the play.

“There’s a difference between simply retelling the story and reliving it,” Dunn told The Daily Signal. “As an actor, you are trying to bring out the humanity of each individual involved.”

The altercation reached a critical turning point when Brown reached into Wilson’s car, punched the officer several times, grabbed the officer’s gun, and attempted to get control of the weapon, according to Wilson’s testimony.

This happened after Wilson had tried opening his car door, only to have Brown slam it shut, the officer said in his testimony.

Johnson, the 22-year-old who accompanied Brown that night, said in his testimony that “the first, initial contact” Wilson and Brown had was when the officer’s “arm came out of the window” and “grabbed a hold of Big Mike’s shirt around the neck area.” Cedric Benjamin, who is from Florida and moved to New York to pursue a career in acting, played the part of Johnson. He sympathizes with his subject.

Benjamin used highly pronounced facial expressions as part of his portrayal of Johnson to help capture his subject’s growing anxiety while he was being questioned by lawyers.

Johnson also saw that “Big Mike kind of reverses the grab” when the store clerk tries to stop him.

“The grand jury was there to determine if there was enough evidence to go to trial,” Benjamin told The Daily Signal. “That was the purpose, but the entire time it just felt like the lawyers were prosecuting Michael Brown. The injustice of the justice system is the story that needs to be told.”

The testimony of Wilson and Johnson diverge sharply. Wilson tells the grand jury that it was Brown who reached into the police vehicle.

There was physical and forensic evidence presented to the grand jury that backs up Wilson’s version of events. McAleer told The Daily Signal he does not view Johnson as a credible witness.

“Johnson was caught several times telling stories that just didn’t hold up under scrutiny,” McAleer said. “When he said the officer reached out of his car to grab Michael Brown, he was describing a physical action that defied common sense and one that didn’t happen.”

Oliver D’Anna, 13, a precocious eighth-grader from Westport, Connecticut, with an acute interest in theater, wanted to know why Wilson didn’t just drive off when the situation escalated.

“Why didn’t he just push on the gas pedal and drive away?” D’Anna asked. “It seems like he could have done something to avoid the situation.”

Finally, after the shots were fired, Wilson is able to exit his vehicle and pursue Brown on foot while calling for backup.

Jenkins, the witness who made a strong impression on McAleer, was in a minivan with her family members when the final confrontation leading up to the shooting takes place. Jenkins tells the grand jury that Brown did not raise his hands to surrender and continued to charge the officer.

“I’m not, you know, really big on talking to the police or defending the police. I’m just being real honest with you,” Jenkins said to one of the lawyers during testimony. “I feel like the officer was in the right, and that is a lot of saying. Because other than that, I ain’t got nothing to do with them.”

In one of his final dramatic testimonies, Wilson describes how Brown kept charging toward him even after Wilson fired his weapon.

Dunn, the actor who played the part of of Wilson, expressed skepticism toward the officer’s testimony.

“I personally did not believe him, and I don’t think the shooting was justified,” he said. “The burden should be on the police to defuse the situation. But as an actor, you don’t get to make a choice about whether or not you believe someone. You want to capture as much of what it must have been like in that situation, which was traumatic for everyone involved.”

Benjamin, the actor who played Johnson, sees value in the verbatim approach to theater, but thought more of the verbatim material could be been used to show that Brown was a genuine victim in the shooting.

The Daily Signal asked McAleer if that was an option.

Tensions flared after the final performance, when Benjamin asked audience members to activate their smartphones and record his criticisms of the play and what he regarded as an unbalanced presentation of the Ferguson shooting. But Jerry Dixon, the director of the play, interjected, describing Benjamin as “unprofessional” and telling the actor to leave the stage.

Note to Empire: Jussie Smollett Was Not Exonerated of All Charges

In 5 Points, a Former Drug Czar’s Prescription to Combat Opioids and Pot