They are from some of the oldest Christian communities in the world, from lands where Abraham, Sarah, Isaac and Rebekah walked, and where Jonah called the people of Ninevah to repentance. But today these Christians have been targeted for death, sexual slavery, displacement, cultural eradication and forced conversion by ISIS. The U.S. government’s response has been woefully inadequate — neither helping them defend themselves and stay, nor providing them asylum to leave. And now, to add insult to injury, they are casualties of the agencies contracted to resettle refugees in America.

Many of these persecuted Christians understandably hope to escape to the United States where there are already sizeable Iraqi and Syrian Christian communities. But they have been largely excluded, with the State Department’s Bureau of Population, Refugees and Migration (PRM) even admitting outright to officials at The Barnabas Fund, a Christian relief agency, “There is no way that Christians will be supported because of their religious affiliation.”

There’s also this: According to official data from the State Department’s Refugee Processing Center for Fiscal Year 2015, resettled Syrian refugees were 97% Muslim. The Hudson Institute’s Nina Shea, in a November 2 article in National Review, showed that in the past five years only 53 of 2003 Syrian refugees accepted by the United States have been Christians (only about 2.5% of the total). But about 10% of Syrians are Christians, so why are so few of these refugees Christians, particularly given that they are among the most persecuted of groups in Syria? 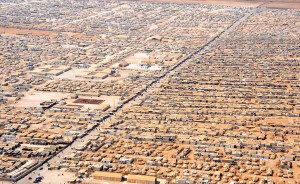 Their plight involves a nightmarish catch-22. When Christians flee as refugees they cannot go to UN-run refugee camps because there they face the same persecution and terror from which they fled. If they are not in the refugee camps they are not included in the application process for asylum. The U.S. State Department knows this, but continues to allow the office of the UN High Commissioner for Refugees (UNHCR) to select refugees for asylum with no regard to the endangered Christians and other religious minorities. According to statements in the Sunday Express from an ISIS defector and aid workers in the UN camps, ISIS is sending teams of trained assassins disguised as refugees to kidnap and kill Christians.

And we’ve just learned that the State Department is poised to rule that Yazidis but not Christians are likely to be designated as victims of genocide in Iraq.

The blame is not just with the United Nations and the Obama administration. U.S. organizations who resettle refuges are also to blame. This includes Christian groups that resist any focus on Christian victims of ISIS, and oppose actions by Congress to welcome not just economic migrants but also Christians and other religious minorities victimized by ISIS.

Since 2014, ISIS and its jihadist partners have waged a genocidal jihad against the Christians of the region. “We now face the extinction of Christianity as a religion and as a culture from Mesopotamia,” declares Archbishop Warda.

The homes of Christians are being marked with the Arabic letter “n” (ن) to identify them as followers of Jesus, the Nazarene. While in the West Christians express Christian solidarity through rubber bracelets and pins marked with ن on our clothes, and with stickers on our cars, their jewelry, clothing and cars are being confiscated. They faced the prospect of death, conversion or dhimmitude (living as “conquered people” and paying the jizya — basically protection money).

Other religious minorities — such as the Jews, Yazidis, Mandaeans, Shia Shabaks and Turkmen — are also being targeted, and also largely left out of refugee resettlement. For instance, Nina Shea notes that only one Yazidi was resettled in the U.S. in the past five years of Syria’s civil war, even though thousands of Yazidi girls as young as 9 endure unspeakable horror and are often taken as sex slaves by ISIS.

Since we now know that such murderous jihadis can enter Europe and murder Parisians, there can be little doubt that religious minorities in refugee camps are vulnerable. And it’s not far-fetched to believe ISIS members and other jihadists could come to the United States disguised as refugees, as well. FBI Director James Comey, Director of National Intelligence James Clapper, and Department of Homeland Security Secretary Jeh Johnson have all admitted that Muslim refugees from Syria cannot be properly screened. 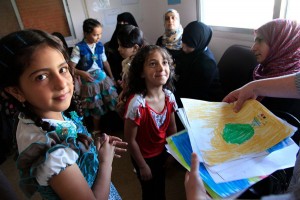 In spite of this reality, the Voluntary Agencies (VOLAGs) working with the Federal Office of Refugee Resettlement are demonizing members of Congress who are seeking to rectify the situation. In September, House Homeland Security Chairman Michael McCaul (R-TX) introduced a bill to protect the nation from terrorists by strengthening the screening process for refugees seeking to enter the United States. The bill, the Refugee Resettlement Oversight and Security Act of 2015 (H.R. 3573), also would prioritize religious minorities — those who actually do have a “well-founded fear of persecution” for refugee status. This would, of course, be the Christians and religious minorities who, in the words of Lord Carey, the former Archbishop of Canterbury, have been “yet again left at the bottom of the heap.”

Protests against H.R. 3573 sound just and fair at first glance. On September 30, an article in the Huffington Post exclaimed that even “Christian groups that work with refugees are strongly opposed to a proposal that would in effect put Iraqi and Syrian Christians ahead of Muslims for resettlement in the U.S., even if they are also victims of persecution.” The article does not explain that many of the “Christian groups” mentioned have been recruited by the VOLAGs that profit enormously from resettling refugees in areas they and the Federal government choose.

These organizations, which include Church World Service, Ethiopian Community Development Council, Episcopal Migration Ministries, Hebrew Immigrant Aid Society, International Rescue Committee, US Committee for Refugees and Immigrants, Lutheran Immigration and Refugee Services, United States Conference of Catholic Bishops, and World Relief, acquire an average of some 70% of their revenue from taxpayer-funded federal grants and contracts. In some estimations, they receive more than $4,000 per refugee resettled.

About the same time, a VOLAG director — who was taking marching orders from the House Judiciary Committee’s Democratic staff, who were was concerned “that proposals are making traction to only help Christian refugees” — proposed to neutralize this development through a sign-on letter for faith leaders, to be sent to every member of Congress. Hundreds were recruited to sign the letter, which was sent to members October 1.

After waxing eloquent about how their “sacred texts” call them to “love our neighbor, accompany the vulnerable and welcome the sojourner,” the letter continued. “The United States has an ethical obligation to the more than four million Syrian refugees fleeing violence and persecution. … This is why we are calling on the Obama Administration and U.S. Congress to welcome 100,000 Syrian refugees, in addition to the recently announced global settlement numbers.” The final draft of the letter omitted demand for 100,000 and instead asked for the U.S. to “show bold leadership and increase the number of Syrians refugees resettled in the United States, in addition to the recently announced global resettlement admission numbers.” 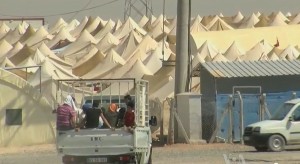 The letter’s call was echoed and re-echoed by Senator Dick Durbin (D-IL) on the floor of the Senate, who urged that 100,000 Syrians be accepted. He assured his fellow senators that all of the Syrian refugees are carefully vetted “to make sure that they’re not a threat to the United States or anybody who lives here.” He did not explain how this could be possible, when national security professionals admit that these refugees are hardly vetted at all. Durbin, incidentally, is the same senator who for months blocked re-authorization of the U.S. Commission on International Religious Freedom, the organization created by the passage of the International Religious Freedom Act of 1998 to help promote religious freedom around the world.

The faith leaders’ letter, drafted by the VOLAGs, continues, “We write today to specifically state opposition to any legislation or proposal that would prevent Muslim refugees and individuals from other faiths from accessing the U.S. refugee resettlement program.” An earlier draft[i] that said they opposed bills “that would prioritize Christian refugees at the expense or rejection of Muslim refugees or individuals of other faiths,” didn’t make the final cut. Nor did a statement in the earlier draft that affirmed that “many Christians have been resettled through the USRAP (U.S. Refugees Admissions Program) and will rightfully continue to be resettled.” Perhaps it was cut because they realized the statement might prove false.

Another questionable statement, in light of what is happening with the influx of Syrian migrants to Europe, is that these “new Americans of all faiths and backgrounds” will “contribute to our economy, our community and our congregations.”

Many Christian individuals and churches have participated with such VOLAGs as World Relief in “welcoming refugees,” and are gladly hosting Syrian Muslim families. But they are curious, and somewhat concerned, that there appear to be no Christian refugees in sight. To those who express concern over this, World Relief scolds with this non sequitur: “As Christians, we also insist upon welcoming refugees from other religious traditions as well, without discrimination.” The VOLAG says it practices Jesus’ “Golden Rule,” “responding with the hospitality and compassion with which we would hope to be treated if we were forced to flee our homes to a foreign country, respecting the religious beliefs of others just as we would hope that our convictions would be respected.”

Refugee resettlement organizations provide a great service when they are helping those fleeing persecution. But things change when refugee resettlement is a big business. Currently the VOLAGs, UN High Commissioner for Refugees Antonio Guterres, and Homeland Security Secretary Jeh Johnson, are all trying to broaden the legal definition of refugee to cover the millions of migrants flooding Europe, some with the express purpose of spreading the Caliphate established by ISIS. At the 12th annual Immigration Law and Policy Conference at Georgetown Law School October 29, Guterres expressed the need to find a new category for “climate refugees” as well as economic migrants. But there was no focus on persecuted Christians. 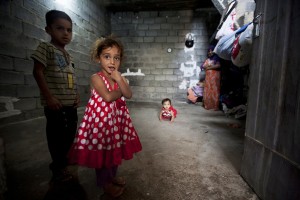 Children who fled the escalating violence in the southern part of Iraq share a small house with relatives in Turaq.

One can only hope that Iraqi and Syrian Christians languishing in unfinished, concrete buildings in Erbil, northern Iraq and Syrian ghettos never discover how American refugee resettlers, and even some Christian leaders, have worked to prevent Congress from making a place for Christian refugees. Instead, let’s pray for religious and political leaders with discernment and spine to clear a way for our brothers and sisters in Christ, yearning to breath free.

[i] The previous draft of the letter is available upon request.