Climbing to fourth place in its opening weekend, the Abby Johnson biopic beat all expectations. Yet Unplanned has other surprises beyond box office results. 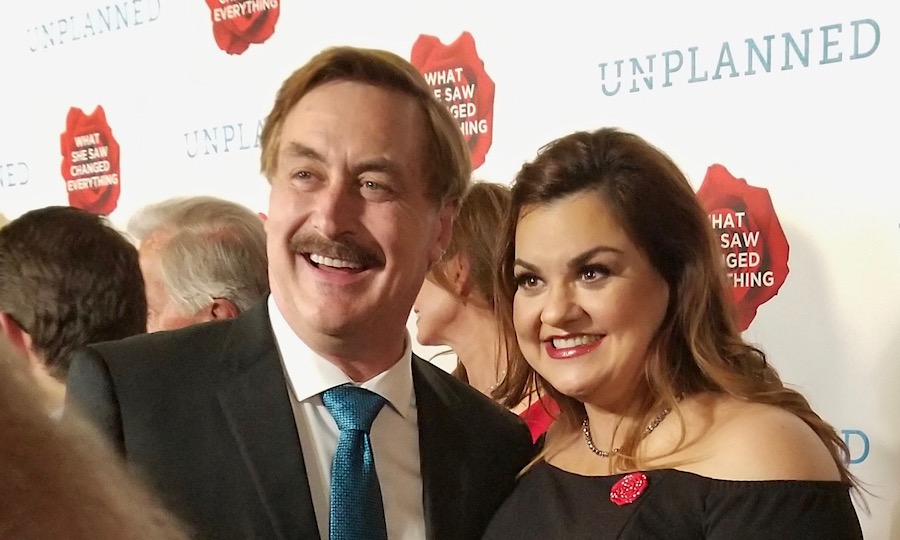 On March 18, 2019 during the Hollywood premiere of Unplanned, pro-life advocate Abby Johnson poses with Mike Lindell, CEO of MyPillow, Inc., at the TCL Chinese Theatre in Los Angeles, California. The entrepreneur partially funded the Johnson biopic Unplanned, currently in theaters.

Taking the fourth spot nationwide with $6.4 million in its opening weekend, Hollywood analysts are calling Unplanned a box office “miracle.” The film expands to 1,700 screens nationwide on Friday.

Based on the memoir of former Planned Parenthood clinic director Abby Johnson, it chronicles her transformation from abortion rights activist to pro-life advocate.

The wide range of voices involved can be seen in seven noteworthy cameo roles in Unplanned. The first 40 Days for Life campaign which took place in Bryan, Texas plays a crucial role in the film. Pro-life advocates are portrayed in fall 2004 holding a peaceful prayer vigil outside Johnson’s clinic, 24/7 for forty days.

A local TV reporter (played by Lila Grace Rose) interviews a Planned Parenthood spokesperson about the vigil and its effect.

In real life, Rose founded nonprofit Live Action at age 15 to stand against, in her words, “the greatest human rights abuse of our time: abortion.” Many millennials have reexamined the controversial issue due to her creative media advocacy.

Live Action has conducted undercover stings of abortion facilities to reveal misdeeds. “While still working as a clinic director, Abby Johnson had a poster of me up in her clinic, warning front-office staff to be on the lookout for me,” stated Rose in a recent article.

The most recognizable face in Unplanned comes near the end. Known for his MyPillow infomercials which have aired on TV millions of times, Mike Lindell not only has a cameo. The entrepreneur also invested one million dollars of the film’s $6 million production budget.

Lindell’s brief role involves him bulldozing the sign in front of Johnson’s Planned Parenthood facility. “I’m pro-life and I’m happy to do it,” said Lindell to the Hollywood Reporter. “It was difficult. I have a spirit of unworthiness, so I had to get over my shyness.” Unplanned touches little on Abby and Doug Johnson’s journey of Christian faith, which is recounted in her 2010 memoir and elsewhere. At one point, after Abby had become clinic director, the film shows a scene of them attending a non-denominational evangelical church.

The pastor preaches from Psalm 139, specifically verse 13. It states: “For you created my inmost being, you knit me together in my mother’s womb.” This preacher is portrayed by real-life Christian minister Kris Vallotton.

A full-time pastor and author for decades, Vallotton serves on staff at Bethel Church in Redding, California. Their worship team provided much of the film’s music. To encapsulate a decade into a two-hour film, Unplanned streamlines real-life events.

In the movie, Stacey Bradshaw portrays “Karen” with the Coalition for Life. Her part combines the roles Heather Gardner and Karen Herzog had in Abby’s life story.

Back in 2009, Heather Gardner answered the door on the fateful day when Johnson drove to the pro-life ministry nearby. Gardner was skeptical. “I figured she was a spy, or just trying to pull our leg,” she said recently.

In the film, Gardner herself appears briefly as a nurse in the POC Room at the clinic. Today, she leads the Central Texas Coalition for Life in Austin, Texas.

Meanwhile, Herzog works with Johnson at And Then There Were None, a ministry to help abortion workers leave the industry.

The film closes with a legal battle, as Planned Parenthood attempts to enforce a gag order against Johnson. (Johnson’s book presents a more interesting series of events, though perhaps too complex for a movie climax.) Early in his career as an OB/GYN, Dr. Anthony Levatino performed first and second trimester abortions. In Unplanned, he appears in two controversial scenes. He handles forceps and other instruments familiar to him, as the movie depicts abortion procedures.

“I did over 1,200 abortions during a four-year period in private practice,” said Levatino in a 2015 Congressional committee hearing. “I performed abortions up to 24 weeks. I know it sounds hard to believe, but I am telling you straight up my experience.”

Having stopped performing abortions in 1985, Dr. Levatino continues to deliver babies as a board-certified OB/GYN in Las Cruces, New Mexico.

Similar to Dr. Levatino, Julie Ann Wilkinson once assisted in performing abortions as a nurse in Boulder, Colorado. In the film, her character and Johnson (portrayed by Bratcher) assist with an ultrasound-guided abortion.

“I learned how to prepare women for procedures: to set out sterile instruments and turn on suction machines,” she stated in a 2015 interview. “I had to always be sure the little cloth drape was around the glass bottle that held the ‘products of conception’ after the suction abortion. It was an awful thing.”

Wilkinson quit the abortion clinic after two years and says being a mother changed her. After a brief role in last fall’s Gosnell film, she got a call about Unplanned. “I wouldn’t accept the producers’ offer to pay me for the role,” she said in an AFA Radio interview last week.

“To use my unfortunate history as a way of making the film more realistic was the right thing.”