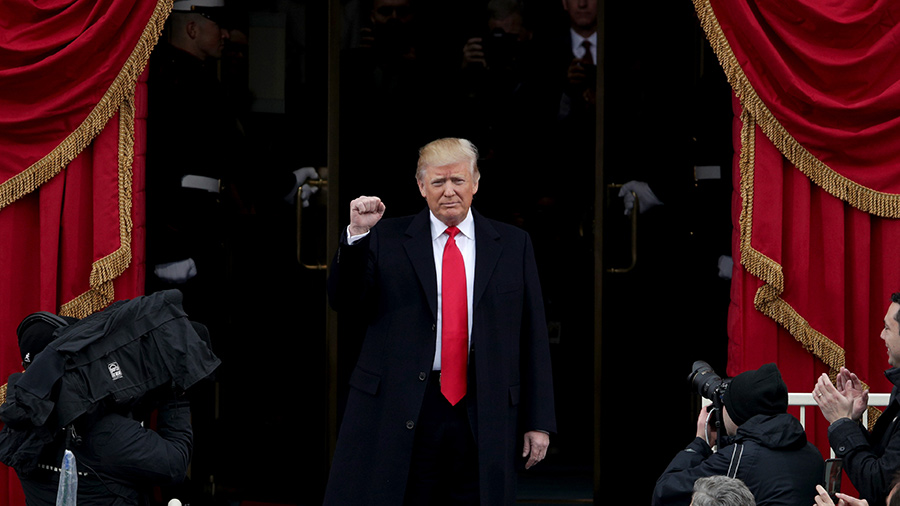 Donald Trump has provoked more outright panic among people with advanced degrees than any politician in recent history. It would be easy for the unwary to draw the darkest conclusions. The desperate urgency of his enemies, from panicked globalists penning incendiary columns to social justice warriors literally torching limos, suggests that his rise represents some new force of extremism, or dark, regressive forces that threaten our very Republic.

Surely (onlookers could reason) Trump holds to some radical, dangerous creed, or else why are all these smart people engaged in such a nationwide public meltdown? If you’re sitting in a crowded theater, and not just one person but dozens are shouting, “Fire!”, you are likely to head for the exit.

But sometimes where there’s smoke, there really isn’t any fire, but instead a smoke machine planted in Lady Liberty’s skirt. Today we saw the peaceful transfer of power in our Republic, and the American experiment in ordered liberty is as safe as it ever was. In fact, in key ways it is safer.

To those listening honestly with even a modicum of charity, Trump’s speech should have helped to disarm most of the genuine causes for worry that his critics have raised over many months. Trump firmly rebuked the small, vociferous cult of online Caucasoid tribalists whom some have tried to smear him as championing. Trump used these ringing words, which clearly came from the heart:

A new national pride will stir our souls, lift our sights and heal our divisions.

It is time to remember that old wisdom our soldiers will never forget: That whether we are black or brown or white, we all bleed the same red blood of patriots, we all enjoy the same glorious freedoms, and we all salute the same great American Flag.

President Trump made it starkly clear that his vision of national solidarity, of “loyalty to each other” has everything to do with citizenship, and nothing to do with race. His is the healthy, Jacksonian nationalism of a Truman or a Reagan — and not the narrow, crabbed and envy-ridden sentiment of racial separatists or supremacists of any color.

Trump’s foreign policy principles are clearly drawn from that same Jacksonian heritage, which does not use lofty promises of global transformation that are sometimes hard to distinguish from Jacobin or Leninist rhetoric. Instead, Trump speaks plainly of defending our national interest in a fallen and perilous world. How often over the past 16 years have our decisions on crucial questions, from Iraq to the “Arab Spring,” been distorted and rendered delusional by universalist abstractions, which ignore the stubborn facts on the ground in Fallujah or Benghazi.

Too many “forgotten Americans” from coal mining country or struggling farms have bled out and died on alien sand, as our nation’s debts piled still higher, in pursuit of fantastical projects that seemed uplifting to some speechwriting civilian over on M Street.

Those who are tempted to panic over Trump’s pledges to enforce our duly enacted immigration laws should know that his promises, just like those laws, grow out of a deep respect for citizenship as a concept with texture and meaning, carrying both rights and duties — not some blank PDF which anyone on earth may download and print out at Kinkos.

While we recognize the equal humanity, under God, of foreign nationals, for Trump it is unpatriotic to treat them as indistinguishable from our fellow Americans — whose ancestors worked, fought, may even have slaved for the weal of this nation in particular, not for humanity as a category.

In fact, Trump’s vision of citizenship goes a good deal further than many libertarians and classical liberals think fitting: He sees the United States as one vast extended family, to the point that we should be willing to sacrifice economic efficiency for the sake of looking out for the least among us. Sound economists have warned us of the Rube Goldberg absurdities that come along with protectionism, and it’s not at all clear that less fortunate Americans would benefit from a trade war that we provoked.

So when it comes time to implement Trump’s agenda in nitty-gritty policies, we must insist that measures meant to help Americans whose livelihoods are challenged by foreign competition be as small-scale and short-term as possible. Just as Trump rightly sees that the U.S. government cannot create democracy where the seeds for it always shrivel, he must realize that the same government cannot save entire industries whose economic foundations in reality are crumbling.

Americans have traditionally been a flexible, adaptable, “can-do” people, who picked up and moved from New England to flee its stony soil for the vast fields of the West, and left unprofitable farms to staff the vast factories of Chicago and Detroit. What Trump sees, as most other Republicans didn’t, is that the transitions which economic reality has imposed on many less-connected Americans have been bumpy, painful, and sometimes destructive.

Wall Street gamblers were able to threaten an economic meltdown in 2008, to gain a golden parachute from the government. The election of Donald Trump is a fitting rebuke to elites in both parties who allowed that injustice to happen.

Trump tapped into the populist current that now runs through most Western countries, a wholesome rebellion against the cozy backroom deals and policy tweaks customized to serve the self-styled “cognitive elite,” the people who sail from elite colleges to corner offices, who use the rhetoric of “justice” and “inclusion” to rise to unaccountable power in U.S. federal agencies and European Union commissions. He spoke in brash and divisive terms of an open split between the interests of these elites and the people they claim to represent. It was bracing to hear him state matters so bluntly.

For too long we have allowed those who can master phrases and administer people to thrive, while those who work with their hands are shunted aside.

Restoring the Balance in American Politics

No, Donald Trump will not create a Peronist regime, which wrecks the U.S. economy in pursuit of some ill-conceived “social justice.” He will not embark us on wars of naked aggression and foreign conquest. He will not seed our cities with racial hatred, nor blacklist Hollywood actors.

What he will do is repair the grave imbalances in our politics that emerged in recent decades. For too long we have allowed those who can master phrases and administer people to thrive, while those who work with their hands are shunted aside — and often replaced by compliant foreigners. Too many policy debates are dominated by a battle of empty abstractions, as taxes rise, budgets burst and real-world communities wither.

In an age when European governments react to the crime waves inflicted by a massive influx of Muslims with Third World skill sets and a 7th century worldview by censoring the news so citizens won’t rebel, it is more than simply refreshing to have a president like Trump, who is impervious to happy talk and in touch with ordinary people. It might even prove redemptive.