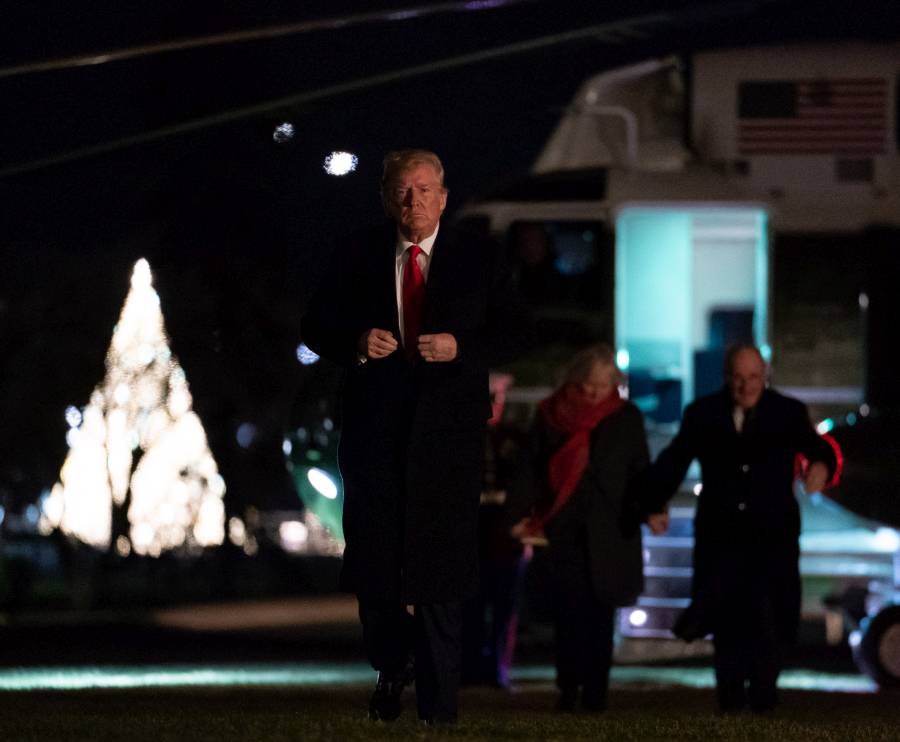 President Donald J. Trump arrives back to the White House Saturday evening, Dec. 14, 2019, on the South Lawn of the White House after attending the 120th Army-Navy football game in Philadelphia, Pa.

On the eve of his likely impeachment by partisan House Democrats, President Trump has sent a remarkable, impassioned six-page letter to House Speaker Nancy Pelosi.

for the purpose of history and to put my thoughts on a permanent and indelible record. One hundred years from now, when people look back on this affair, I want them to understand it, and learn from it, so that it can never happen to another President again.

Democrats, he says, are “declaring open war on American Democracy.”

For six fiery pages, the president unloads on Democrats and the “impeachment fantasy.” He details how the two Articles of Impeachment “include no crimes, no misdemeanors, no offenses whatsoever.” Says Trump, “You have cheapened the importance of the very ugly word, impeachment.”

The Abuse of Power article he calls a “completely disingenuous, meritless and baseless invention of your imagination.” He repeats how Ukraine’s president and Ukrainian officials deny there was any pressure put on them. How witnesses say the Ukrainians never expressed any concerns about the call, and how the one fact witness brought forth by the House says Trump told him directly “I want nothing” from Ukraine.

He calls the “so-called” Obstruction of Congress “preposterous and dangerous.” The House is trying to impeach him for asserting Constitutionally-based privileges that have been asserted on a bipartisan basis by administrations of both parties throughout our Nation’s history. “Under that standard, every American president would have been impeached many times over.”

Trump recounts in detail how he’s been deprived of basic Constitutional Due Process. “More due process as afforded to those accused in the Salem Witch Trials.”

This impeachment, he insists, has nothing to do with his “perfect” call to Ukraine.

His Crime Was Winning

“Everyone, you included, knows what’s really happening,” he writes. Democrats have never accepted his victory and have been working tirelessly since 2016 to remove him. He lists by name many of those who’ve been calling for impeachment literally since minutes after his inauguration. “You view democracy as your enemy!”

He predicts “the American people will hold you and the Democrats fully responsible in the upcoming 2020 election. They will not soon forgive your perversion of justice and abuse of power.”

Letter From President Trump by Fox News on Scribd