Trump Didn’t Give Up on Black Americans. The Democrats Did Long Ago. 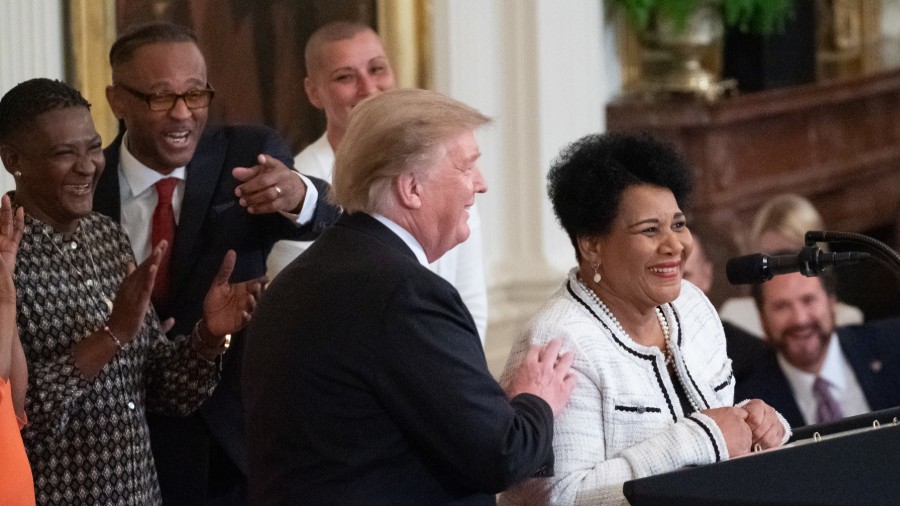 The Democrats’ stranglehold on the Black vote has ended, and all because one man never gave up on reaching out to the African American community.

Stuck In One Place

When I wrote A Dream Derailed: How the Left Hijacked Civil Rights to Create a Permanent Underclass, I was concerned about what had happened to African American families and businesses. When I was marching in the civil rights movement of the 1960s, it seemed as though the Promised Land of prosperity and equality was just over the horizon. But decades later, we seemed to be stuck in one place.

Even worse, we’d handed over our political influence to manipulative politicians who took us for granted. They would say all the right things, then turn around and embrace policies that hurt Black families, led to the decay of our inner cities and trapped students in failing schools. Despite the fact that it conflicted with their values, African Americans continued to vote for liberal politicians who supported abortion, transgender ideology and who opposed school choice.

President Trump: A Hand-Up, Not A Hand-Out

Now, however, things are changing. Over the past four years, we have witnessed President Trump challenge those old party loyalties by doing more for the Black community than any of his contemporaries — even President Obama.

That is why we’re choosing the candidate who has the energy and vision to take America into the future.
That is why President Trump has my vote.

To begin with, President Trump did something that few other politicians do. He sought out the opinion of a variety of African American leaders and he listened to what we had to say. Then he supported policies and programs that have real potential to help Black families. President Trump stepped across the aisle to enact the First Step Act and has continued to support prison reform. He has increased funding for historically Black colleges and reduced Black unemployment. What’s more, his new Platinum Plan looks to invest millions in Black businesses and communities. This is a president who believes in giving a hand-up, not a hand-out in order to help our community thrive. Trump’s opponents can’t compete with him in terms of action, so they resort to smears. They endlessly repeat the famous “very fine people” hoax and try to claim that the president is racist. But I’ve been around too long to be swayed by the nastiness of political rhetoric. I’m more concerned by what the candidates have accomplished and what their policies are.

By that measure, Trump really does reflect the hopes and values of Black families far more than his opponent.

Biden And The Democrats: Empty Promises And Government Dependency

Biden and his leftist running mate are radically pro-abortion, opposing even restrictions on late-term abortion. They promise to elect liberal, activist judges and have even threatened to pack the Supreme Court to uphold their agenda. They oppose vouchers and school choice — which would help Black children escape failing schools — because they are beholden to the unions. They want to keep the country locked down indefinitely, yet they oppose doing anything to quell the rioting that swept our nation. They have even spoken in support of tax hikes, socialist policies and the Green New Deal.

Trump, on the other hand, has defended religious freedom and appointed constructionist judges who will not try to legislate from the bench. He supports school choice and opposes late-term abortion. Before the lockdown, he had helped boost the U.S. economy through tax cuts and job creation — something we’ll need in the coming years.

While Mr. Biden and the Democrats continue to take the Black vote for granted, offering nothing more than empty promises and more government dependency, President Trump is offering hope and a real plan to help African Americans.

Real Change For The American Future

Four years ago, President Trump asked us to give him a chance and we gave him one. What he did with that chance shows that he deserves another four years in office. Over the last four years, President Trump has helped millions of African Americans live better, more prosperous lives. He has demonstrated that he is willing to listen and that he wants to help achieve real change. That’s why so many Black voters have walked away from Biden, Harris and the Democratic Party. They don’t represent our values and they aren’t willing to break away from the old, damaging liberal policies that have destroyed the Black family.

That is why we’re choosing the candidate who has the energy and vision to take America into the future. That is why President Trump has my vote.

Rev. Owens is writing here in his personal capacity as a private citizen and not as the representative of any organization.