Trump Defense Finally Getting Its Shot … Already on Target 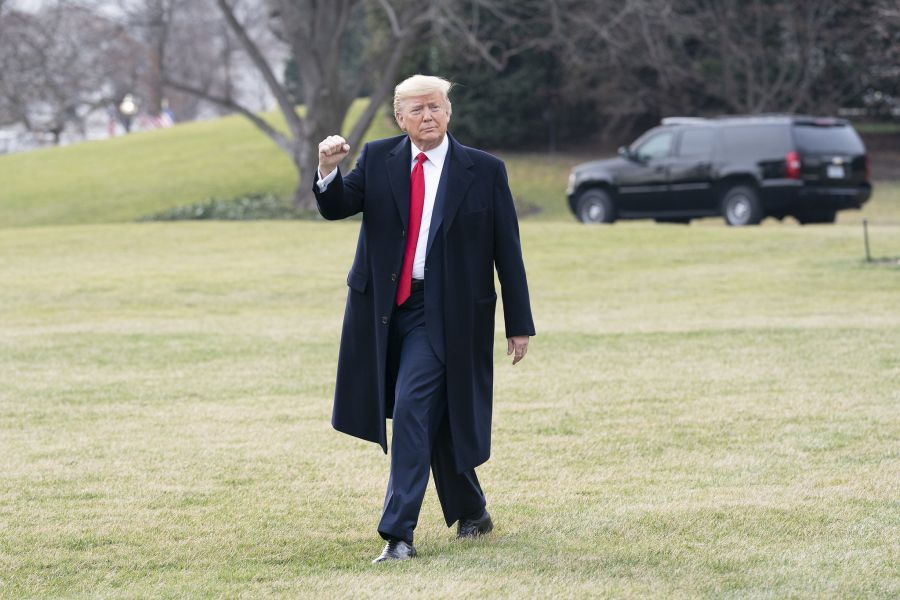 President Donald J. Trump gestures with a fist pump as he walks across the South Lawn of the White House Thursday, Jan. 23, 2020, to board Marine One and begin his trip to Miami, Fla.

How do you know President Trump’s lawyers destroyed the House Democrats impeachment case Saturday morning? Because the latter cried “Uncle!” They played the race card. The Senators had barely left the chamber before CNN’s legal analyst Jeffrey Toobin noted that all of Trump’s lawyers were white men.

When CNN reverts to skin pigment, they know the argument is lost.

Trump’s defense knew its audience. Namely, 100 U.S. Senators who’d been forced to endure 24 repetitive, endless, monotonous and straight out insulting hours of Adam Schiff and the Impeachment Players. 24 hours of Mr. Schiff Goes to Washington. 24 hours stuck in the Senate chamber suffering the one thing politicians hate most: a voice that’s not their own.

They wanted to go home. Or run to the cameras. Or in the case of Senators Sanders, Klobouchar and Warren, fly to Iowa.

So the Trump Defense over-delivered. They said they’d go three hours. They went only two. The sigh of relief was audible. Jay Sekulow stroked their egos, saying Senators didn’t need to see the same videos over and over. (In other words, “Schiff thinks you’re an idiot.”)

The Trump defense sent a clear message by simple means. They opened with the video of Schiff’s fabricated mafioso “performance” of Trump’s call. Then a montage of Schiff repeatedly promising hard evidence of Trump-Russia collusion. The takeaway being: “Same Schiff. Same Shame Act. Different Setting. Don’t be played for suckers.”

The Best Defense is Using Prosecution’s Own Witnesses

The goal of the short session was to blow holes in the House case and its credibility.

The Trump Defense laid out a multitude of ways the Schiff and crew had misled the Senate. Had kept pertinent information from them in the form of partial quotes. Had completely ignored exculpatory testimony from their own witnesses. “Why didn’t they tell you that?” was a constant refrain.

The Trump Defense kept using the Democrats’ own witnesses to undercut the House case. For example, House Managers had insisted that Ambassador Sondland was convinced there’d been a quid pro quo. The Defense pointed out how Sondland was speculating on a quid pro quo … until he went to Trump himself and heard otherwise. And then Sondland spread the word that Trump didn’t want anything from the Ukrainians.

They proved how Ukrainians had no clue about any sort of hold on aid. Not until they read about it in a Politico article at the end of August. Common sense: If you want to blackmail a Ukrainian president you actually have to tell the Ukrainian president what you want. Joe Biden taught us that.

Trump’s Defense noted how President Zelensky himself keeps saying he wasn’t pressured. But Schiff thinks he knows better. How does calling the Ukrainian president a liar or an idiot help our foreign relations? But more to the point, how in the world do you impeach President Trump for something that’s in Adam Schiff’s head?

President Trump’s the one on trial. But Democrats are more interested in what people thought about Trump than what Trump actually did.

President Trump faced jibes last week after a report came out claiming he wanted telegenic lawyers. Trump knows what he is doing.

Introducing Patrick Philbin. Remember the quiet, brainy, scrawny kid from high school? The who never took his nose out of a book, but would help you with your homework on a moment’s notice?  The kid who even though he looked the very definition of a nerd never faced bullying, because he just oozed smarts and decency? That’s Deputy White House counsel Patrick Philbin.

Philbin’s task was to dismember the impeachment Article Two, “Obstruction of Congress.” In smooth, soft tones that make Mr. Rogers sound like Ted Nugent, Philbin quietly explained why the White House didn’t cooperate with Schiff’s committee. Simple. It was not a legitimate impeachment inquiry that would require cooperation. There had been no House vote authorizing an official impeachment inquiry.

Philbin said the White House was willing to work with the House Judiciary Committee after the House did vote. Sent Chairman Jerry Nadler some questions for clarification. Nadler never answered. Instead, just days in, Nancy Pelosi told Nadler to prepare the impeachment articles.

The Democratcs “weren’t really interested in getting at the facts and the truth,” Philbin said. “They had a timetable to meet. They wanted to get impeachment done by Christmas, and that’s what they were striving to do.”

There was thus nothing to cooperate with. The Democrats were going to impeach come hell or high water.

Philbin gently reminded Senators that President Trump was allowed no witnesses, nor even any counsel or cross examination during the Schiff basement sessions. For 71 of the 78 days of the House Hearings, the defendant was shut out. In America.

The House Democrats kept saying that Trump was a dictator. A monarch. Trump’s Defense pointed out he hasn’t even been shown the rights given you or me for jaywalking.

Saturday’s two-hour session was a prologue to the full-blown Trump defense. That gets going at 1 p.m. (EST) on Monday. Harvard professor emeritus and liberal icon Alan Dershowitz will speak on how the impeachment articles are not constitutional. Whitewater prosecutor Ken Starr is also expected to speak. Sources tell the Wall Street Journal this will not be a marathon session, lasting into wee hours Tuesday morning. Instead, the defense presentation will go no later than 8 p.m. And it’s even possible, if the day goes well, that the Defense will wrap up today.

It’ll be interesting to see how much the media covers Trump’s defense. They drooled so much over Schiff, they might have shorted out studio equipment. One suspects they will use Kobe Bryant’s tragic death as cover, to limit their live coverage.

Finally, some tough news: House Manager Jerry Nadler will not be present. He confirmed Sunday night that his wife Joyce Miller is battling pancreatic cancer. Nadler will be in New York with his wife Monday meeting with doctors. We pray for a successful treatment and victory over this disease. Cancer knows no partisan lines.