Many leaders at the conservative conference spoke up on behalf of free speech — including President Trump, student rights’ advocates and producers of the new film No Safe Spaces. 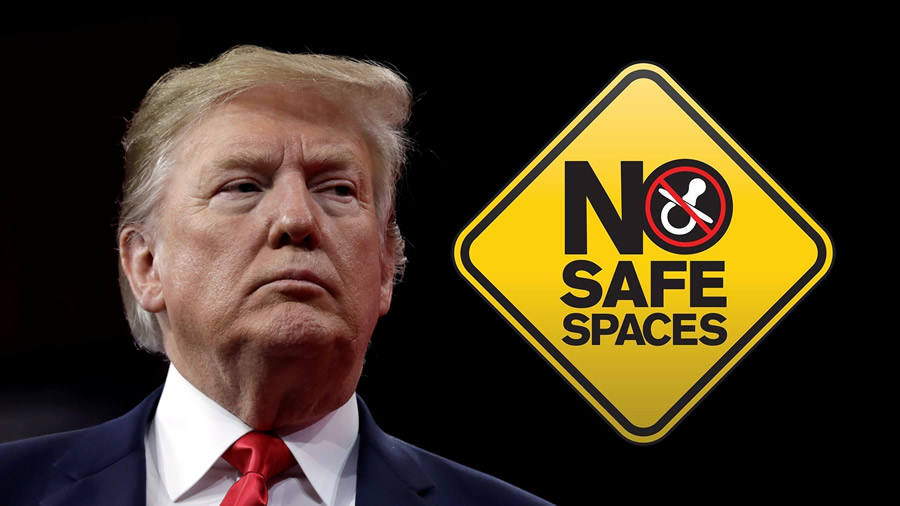 On Saturday, March 2, President Donald Trump spoke to a capacity crowd of thousands at CPAC 2019 in National Harbor, Maryland. The three-day event included an advance screening of docudrama No Safe Spaces, slated for release later this year.

On Saturday, the annual Conservative Political Action Conference in National Harbor, Maryland reached its climax with a keynote address by President Donald Trump.

A record-breaking crowd of 9,252 people attended the gathering, with an additional 10,000 at three simulcast sites. President Trump spoke for over two hours on current events, his critics and at least one major announcement.

“I will be very soon signing an executive order requiring colleges and universities to support free speech if they want federal research dollars,” said Trump to thunderous applause.

“I will be signing an executive order requiring colleges and universities to support free speech if they want federal research dollars” @realDonaldTrump #CPAC2019 #WhatMakesAmericaGreat pic.twitter.com/hyeNZ3jI6F

His preview of upcoming policy capped off three days of speeches and panels featuring 357 speakers, many with censorship issues at the forefront.

CPAC 2019 also included an advance screening of No Safe Spaces, a docudrama about campus free speech slated for release later this year. “There are so many different ways that student rights are violated,” she said in an interview. “It’s pervasive. It’s death by a thousand cuts.”

Her team has recently filed lawsuits against two major universities. Neily explained how these issues have developed, in terms that also apply to big-tech censorship.

“Speech codes are written really broadly and vaguely, capturing a lot of political speech protected by the First Amendment,” she said. “‘Offensive’ or ‘hateful’ speech is banned. And it’s not a Constitutional scholar defining those terms. Rather, some diversity and inclusion bureaucracy determine which views are deemed unacceptable.”

Neily provides a specific example. “Religious viewpoints, such as beliefs in traditional marriage, are often classified as biased, bigoted and hateful. Students can get in trouble for saying what they believe in.”

“Religious viewpoints, such as beliefs in traditional marriage, are often classified as biased, bigoted and hateful.” – Nicki Neily

Both cases cite stifling university policies which back so-called Bias Response Teams. These policies encourage students to anonymously report on each other.

“You can get in trouble for saying anything at any time,” explained Neily. “You get called into a Bias Response Team hearing, made up of college administrators, faculty and campus police. Then you must defend your viewpoints. Even if you’re exonerated in the end, you’re just not going to say some things because it’s not worth a disciplinary hearing.

“It’s a hassle that allows schools to chill student speech.”

Censorship On Campus … and Online

On Saturday, President Trump called out such censorship. “We believe in free speech, including online and on campus,” he said. The day prior, CPAC highlighted these related concerns.

“My background is in the practice of Constitutional law,” said Hawley, when asked about tech giants. “We ought to tell them: You cannot engage in viewpoint discrimination. You want to stop people from committing crimes [or] advocating violence on your platforms? That’s great.”

An Alliance Defending Freedom lawyer prior to his Senate win, Hawley continued. “But if you want to edit Constitutionally protected speech, if you want to target conservatives and libertarians, you’re going to be on the hook for that.”

In a panel entitled “Sue the U,” campus free speech issues were examined. Several student journalists and activists shared stories. “About nine out of 10 schools have at least one policy on the books that impacts student and faculty speech,” explained Neily of Speech First.

Leadership Institute field representative Hayden Williams kicked off the dialogue. He recounted an incident that has made national headlines. While engaging in conservative activism on February 19 at University of California-Berkeley, a protestor struck Williams.

The next day, President Trump welcomed Williams back on-stage to praise the student mobilization leader. “Ladies and gentlemen, he took a hard punch in the face for all of us,” said Trump. “Remember that. We can never allow that to happen.”

While several public interest groups represent U.S. students, the Foundation for Individual Rights in Education (FIRE) has long been a prominent voice. Founded in 1999, the nonprofit group has represented both liberal and conservative groups in court. According to FIRE, most of America’s ‘Best Colleges’ restrict free speech

“The Department of Education says there are about 5,000 degree-granting institutions across the country,” said Neily. “Extrapolating FIRE’s data, there could be as many as 4,500 U.S. schools that have at least one bad policy on the books. It’s horrifying.”

Regarding the new administration policy, FIRE declined to comment until specifics are released. “While we are glad that this important national issue has the President’s attention, we do not currently have any more information on the details of the executive order,” they stated.

“We are looking forward to learning more about this initiative in the coming days.”

“Something that makes this country wonderful is that we have so many different options in schooling,” she said. “Public schools have to uphold the First Amendment. Private schools enjoy freedom of association. For example, religious schools often have no alcohol on campus or other policies.”

Her group Speech First has aggressively gone after censorship at state schools. “[But] we haven’t sued any private schools,” said Neily. “It’s something we’re mindful of because we don’t want to create bad precedent that would end up impacting private or religious schools.”

“It’s a shame, because Berkeley was once the home of the free speech movement. Now it’s leading the charge against free speech.” – Hayden Williams

For his part, field representative Hayden Williams said issues at the eminent California school have been brewing for years.

“[Some at] Berkeley are sympathetic to violence against conservatives,” said Williams. “It’s a shame, because it was once the home of the free speech movement. Now it’s leading the charge against free speech.”

Censorship incidents at UC-Berkeley are chronicled with on-site footage and expert analysis in the upcoming film No Safe Spaces.

Featuring author Dennis Prager and comedian/podcaster Adam Carolla, the narrative provides a fast-paced, thought-provoking overview of how free speech has been under assault.

In addition to Prager speaking at CPAC, producer Mark Joseph introduced the screening. He stated No Safe Spaces will open “either this spring or the fall” in theaters nationwide.

As to the executive action from the Trump administration, experts await specifics of how it will address concerns at hand. Robby Soave of libertarian outlet Reason points to culture rather than laws as the issue.

“The education system must do more to uphold the First Amendment, and to encourage students to cherish the principles of a free society,” he wrote. “But a top-down, unilateral imposition on colleges and universities does not strike me as the best idea.”

Neily argues that legal action often becomes necessary. “A lot of schools will pay lip service to free speech but not enforce it in practice,” she said. “There has to be meaningful consequences for schools that are bad actors. The courts are one way to do that. Nobody likes being sued.”

Having been involved in conservative and libertarian circles, Neily laments how polarized current politics has become.

“I’m old enough to remember when the First Amendment was the one thing everybody actually agreed on,” she said. “Free speech is often the only way disenfranchised groups have been able to get their message out, from suffragists to civil rights activists.

“This issue is not limited to the left or right.”