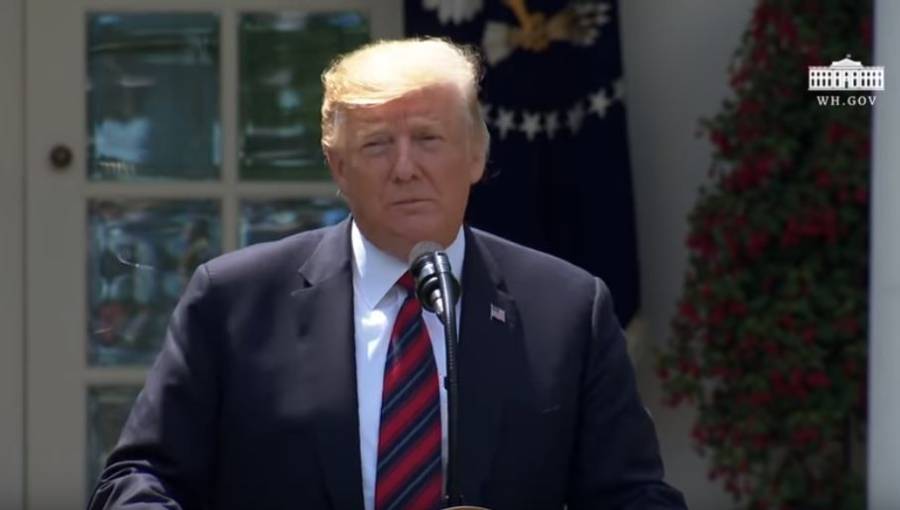 On Thursday, Iran shot down a U.S. drone. The U.S. insisted the drone was in international waters. Congressional leaders were gathered at the White House for a briefing. A military response was prepared.  The ships were in position. The planes were in the air. Gooses were set to get cooked. But with less than 10 minutes before the pre-dawn attack on three sites, President Trump called the strike off. Why?

Three reasons are emerging at this hour. His instincts proved correct, his humanitarian concern is genuine and he is downright cagey.

Trump Instinct: Someone Made a Big Mistake

Answering questions after the drone was shot down, President Trump seemed eager to downplay the incident. He said he didn’t think the order came from the top.

On Friday, Gen. Jack Keane told Fox News that Trump called off the attack because the intelligence community received information that the downing of the drone had indeed been the work of an errant officer.

“The Iranian national leadership was furious with the tactical commander who shot down the drone because they clearly did not want that provocation to take place,” Keane said.  “Based on those facts, new information to the president, he called off the strike.”

Gen. Keane also predicted there would not be a re- attack “based on now the conclusion by the intelligence community that this was not the national leadership’s intention to conduct this provocation.”

As Trump is fond of saying, “We’ll see.”

Trump Heart: Why Blow Lots of Up People Over a Piece of Machinery?

President Trump himself says he called off the strike to save lives. In an early morning tweet, Trump said he’d asked how many people would be killed in the strikes. When he was told approximately 150, Trump decided that such a toll was “not proportionate to shooting down an unmanned drone.”

….proportionate to shooting down an unmanned drone. I am in no hurry, our Military is rebuilt, new, and ready to go, by far the best in the world. Sanctions are biting & more added last night. Iran can NEVER have Nuclear Weapons, not against the USA, and not against the WORLD!

James Robison, Stream publisher and member of the president’s faith council, wasn’t surprised Trump spared Iranian lives. “I’ve had many meetings and calls with the president. He is genuinely concerned about every individual person. He wants what’s best for everybody. He wants to act with wisdom.” Even those in a nation shouting “Death to America” Trump “wants them to experience true freedom just as he does the people in North Korea, China and other nations.”

Robison adds that this is why people need to be praying for the President; praying that he will continue to grow and act with wisdom.

Trump’s Mind: Give Them an Out, Let It Play Out

Trump also said a line in a tweet that’s easy to overlook.  “I am in no hurry.” He doesn’t have to immediately respond to Iran’s downing of the drone, and he doesn’t necessarily have to respond militarily. Especially with sanctions working, especially when he’s got the most powerful military on the planet able to take care of business if and when the time comes. His time clock is not dictated by the 24/7 news cycle.

Some, including Trump pal Sen. Lindsey Graham, are pushing for a harsh military response.  Others say Trump is being “goaded” into a war by neo-cons, the same group of people that pushed us into the Iraq war.  Trump doesn’t want a war. He wants a non-nuclear Iran. Iran doesn’t really want a war. It wants sanctions lifted. The regime wants to survive.

So what did Trump do in the past 24 hours? He gave Iran an out. Even if the order did come from the top, Trump played the downing like it was a bonehead move done by someone far from Tehran. Then he sends Iran an olive branch, an offer to talk.

This offers both sides the chance to de-escalate, not be forced into something we don’t need and the Iranian Regime can’t survive. If Iran cracks the olive branch in two, Trump knows he can always light up the Iranian sky like the Fourth of July tomorrow.

Naturally, Not Everyone Was Pleased

Rep. Liz Cheney, daughter of former VP and noted hawk Dick Cheney, was not pleased with Trump’s decision. She told Hugh Hewitt’s radio show, “The failure to respond to this kind of direct provocation that we’ve seen now from the Iranians, in particular over the last several weeks, could in fact be a very serious mistake.”

An unnamed senior Republican source on Capitol Hill who supported the strike on Iran told CNN, “Trump is much better than Obama … but historically we have seen what happens when the US issues red lines and then fails to enforce them. Failing to take action could be far more dangerous in the long run.”

Naturally, Trump’s 2020 Democratic rivals also had to weigh in from the cheap seats. Politics no longer ends at the water’s edge. Especially when Trump is involved.

Typical was Sen. Elizabeth Warren: “Donald Trump promised to bring our troops home. Instead he has pulled out of a deal that was working and instigated another unnecessary conflict. There is no justification for further escalating this crisis — we need to step back from the brink of war.”

In other words, it’s Trump’s fault Iran is launching missiles at Saudi Arabia, trying to blow up international ships and shooting our drones out of the sky.

Of course, the most important response to the President’s decision to not yet respond militarily is Iran’s. On Friday, Seyed Abbas Mousavi, Iran Foreign Ministry spokesman, said his country “responds to diplomacy with diplomacy, respect with respect, and to war with decisive defense.”

Trump has offered diplomacy. He has shown respect for lives of Iranians. We will see if Iran does react with diplomacy and respect.

Al Perrotta is the Managing Editor of The Stream and co-author of the counter-terrorism memoir Hostile Intent and, with @JZmirak, of The Politically Incorrect Guide to Immigration. You can follow him at @StreamingAl. And if you aren’t already, please follow The Stream at @Streamdotorg.