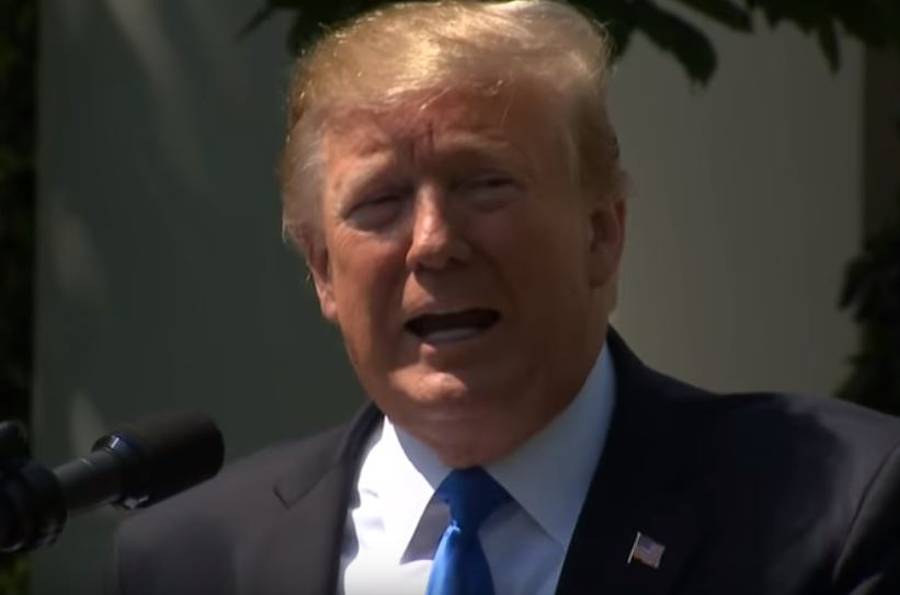 President Donald Trump spoke out on religious freedom Thursday, as he vowed to protect conscience rights and to combat anti-Semitism.

“Just today, we finalized new protections of conscience rights for physicians, pharmacists, nurses, teachers, students, and faith-based charities,” Trump said at a White House Rose Garden event with faith leaders from across the country on hand for the National Day of Prayer. “They’ve been wanting to do that a long time.”

Every American “has the absolute right to live according to the teachings of their faith and the convictions of their heart,” the president said. “This is the bedrock of American life. To protect this heritage, my administration has strongly defended religious liberty.”

The Department of Health and Human Services’ final rule protects both employers and employees. The rule protects providers, individuals, and other health care entities from having to provide, participate in, pay for, pay for coverage of, or refer for, services such as abortion, sterilization, or assisted suicide to which they might have religious objections.

The rule also requires applicants for federal funding from HHS to demonstrate compliance with protecting conscience rights. The rule goes into effect after 242,000 public comments were submitted.

“Finally, laws prohibiting government-funded discrimination against conscience and religious freedom will be enforced like every other civil rights law,” HHS Office of Civil Rights Director Roger Severino said in a written statement.

“This rule ensures that health care entities and professionals won’t be bullied out of the health care field because they decline to participate in actions that violate their conscience, including the taking of human life,” Severino added. “Protecting conscience and religious freedom not only fosters greater diversity in health care, it’s the law.”

Living in accordance with one’s conscience is a fundamental American principle, said Melanie Israel, a research associate with The Heritage Foundation.

“No person or entity should face discrimination or coercion for declining to participate in procedures, such as abortion or physician-assisted suicide, that violate sincere moral, ethical, or religious beliefs,” Israel said in a prepared statement. “The Trump administration’s final rule is a much-needed action to protect individual liberties and robustly enforce federal conscience statutes.”

For more than 40 years, federal law has protected conscience rights of Americans in the context of health care. While the Obama administration provided inadequate enforcement and oversight of federal conscience statutes, this final rule ensures that HHS will safeguard the rights of individuals and entities that dissent on morally sensitive or controversial procedures.

At the National Day of Prayer event at the White House, which first lady Melania Trump opened with a prayer, Trump condemned the April 27 attack on a synagogue near San Diego, California.

“We will fight with all our strength and everything that we have in our bodies to defeat anti-Semitism, to end the attacks on the Jewish people and to conquer all forms of persecution, intolerance, and hate,” Trump said.

The president also cited the shootings at the Tree of Life synagogue last October in Pittsburgh, as well as the recent burning of three black churches in Louisiana, the mass killing of Christians in Sri Lanka, and the slaying of Muslims at a mosque and an Islamic center in New Zealand.

The president said the nation can mourn together — and turn to God together.

During his remarks, Trump invited Rabbi Yisroel Goldstein of the Chabad of Poway, California, where the Saturday shooting occurred, to speak.

“We cannot control what others do,” Goldstein told the Rose Garden gathering, “but we can control how we react. … [T]he way we react to darkness is with light.”

“Our nation’s honored tradition of prayer has sustained us and strengthened our trust that God will continue to watch over and accompany us through the best of times and the darkest hours,” Trump said. “May we as Americans never forget the power of prayer and the greatness of our Creator.”

Americans are Talking About God

Trump said he and Vice President Mike Pence recently spoke about how Americans are talking about God again.

“People are proud to be using that beautiful word — God,” Trump said. “How do you go through those witch hunts and everything else? And you know what we do, Mike? We just do it. Right? And we think about God.”

Pence spoke about the history of presidents and prayer.

“In 1775, the Second Continental Congress established a day of fasting and prayer,” the vice president said. “In 1863, President Abraham Lincoln, from these very grounds, urged Americans to pray so that, in his words, ‘the united cry of the nation would be heard on high and answered with blessing.’

“In 1952, President Harry Truman and the Congress formally established this National Day of Prayer and set [it] aside each year for the American people to turn to God in prayer and meditation,” Pence said.

The vice president also spoke about the recent spate of anti-religious violence.

“No one should ever fear for their safety in a house of worship in America or anywhere in the world,” he said to applause, adding:

And yet, we live in a time when we have witnessed unspeakable attacks on people of faith: at a synagogue in California, just a few short days ago; at mosques in New Zealand; [and] at historically black churches in Louisiana that we’ll be visiting tomorrow.