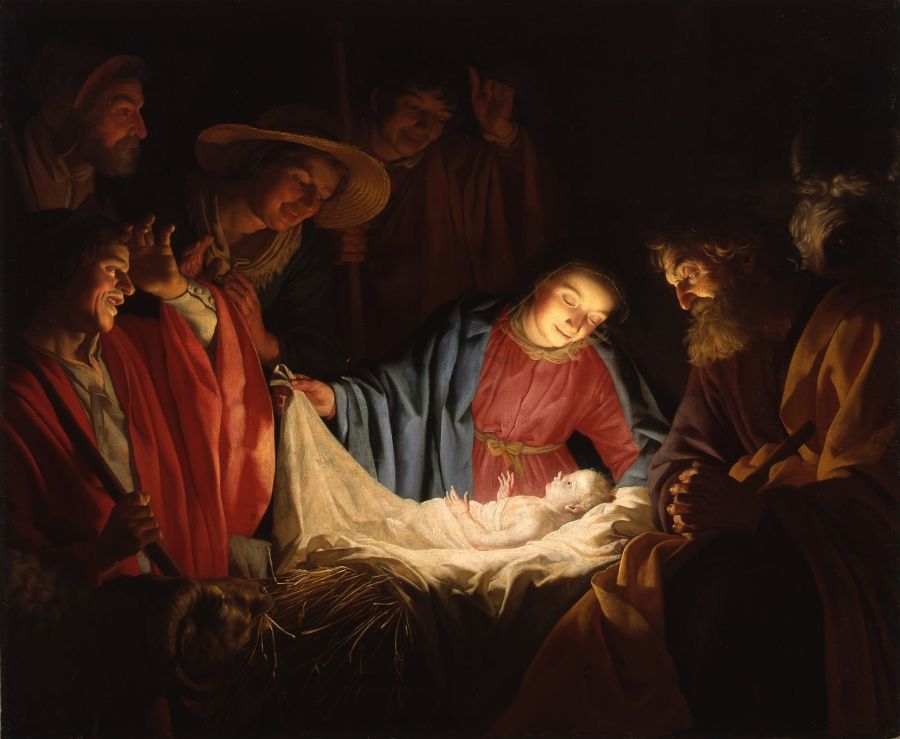 By Dwight Longenecker Published on December 22, 2019 •

The story is the stuff of countless Nativity plays, Christmas cards and beautiful paintings.

You know how it goes … there were a bunch of country bumpkins camping out and dozing around the fire on the hillside when some angels appeared in the sky and sang “Glory Hallelujah” and the farmers rubbed their chins and said, “Ye know Festus, I speck we oughter go down there to the village and see if we can find this here pretty baby.”

Maybe there is a grumpy innkeeper, a sleepy drummer boy or a little shepherd child added to the story about their simple adoration of the Christ child.

That delightful Christmas card version of the story comes to us from the medieval European culture out of which so much of our Christian lore is derived. The rustic shepherds, stables and taverns are the sort you might find if you took a time machine back to Italy, England or Germany in the 1400’s.

But the Bethlehem shepherds were much more than Palestinian local yokels.

To understand the full story we have to get hold of the facts about the Jewish religion and culture of the time.

Every Spring the Jews celebrated the Passover — their commemoration of the events of Exodus when their ancestors were delivered from slavery in Egypt. Part of the celebration was the slaughter and consumption of the Passover lamb.

This Passover lamb was called “The Lamb of God.”

Each December thousands of “Lambs of God” were born and set aside for the Spring sacrifice.

The Jewish historian Josephus writing in the first century records that during New Testament times at Passover up to 260,000 lambs would be sacrificed in the temple at Jerusalem.

260,000 lambs? Every year?! That’s an extraordinary number! Even if Josephus got his data wrong — even 10% of that number is huge. Where did they get that many lambs?

Furthermore, these were very special lambs. They had to meet the strict legal-religious regulations of the Jewish faith.

The lambs had to be no more than one year old, male and without spot or blemish. Therefore they had to be bred and born in controlled conditions and inspected for birth defects before being raised in a specially protected environment.

The other interesting detail is the Jewish regulations stipulated that any animal to be sacrificed at the Temple had to be born within five miles of Jerusalem.

If you were a Jew at that time, to make sure your lamb was perfect for the sacrifice you had to purchase it from the traders at the temple itself. This trade was controlled by the priests and other Jewish leaders.

At the time of Jesus’ birth, therefore, the hillsides around Bethlehem, were a first century lamb factory farm controlled by the priestly livestock traders from the temple. When the lambs were born the shepherds wrapped them in strips of cloth to protect them, and placed them in a stone feeding trough in the birthing barn until the priest could come to inspect them.

However, the breed of sheep most common in the Middle East– the Awassi – give birth in December.

So there, on the hills surrounding Bethlehem was a large farming community dedicated to the specialized task of breeding the huge number of lambs for the Passover sacrifice. Each December thousands of “Lambs of God” were born and set aside for the Spring sacrifice.

The City of David the Shepherd King

Bethlehem was the ancestral city of King David, who had been a shepherd boy on those same hills. He went on to become the shepherd king, and write Psalm 23 with the beautiful words “The Lord is my shepherd.”

The image of the Shepherd-King was an important pointer to the coming Messiah. In the Old Testament Ezekiel the prophet speaks the words of the Lord himself who says, “I will come and be the shepherd of my people Israel.”

The Bethlehem shepherds are therefore much more important than simple country bumpkins who, out of curiosity, wander down the hillside to admire a newborn baby.

Instead they are also descendants of David the Shepherd King, and the ones who are helping the sheep give birth to the Passover Lambs of God.

The Good Shepherd and the Lamb

These shepherds became the first witnesses after Mary and Joseph to the birth of the one who would be both the Good Shepherd and the Lamb of God.

Their job was to take the newborn lambs, wrap them up and place them for safe keeping in a feeding trough to be inspected by the priests. This is why the angel said to the shepherds, “This shall be a sign for you. You will find the baby wrapped in swaddling clothes and lying in a manger.”

That the baby they were going to see was the newborn Lamb of God. He was born in the same place and at the same time with the same treatment as the lambs that would be sacrificed.

This is why at his first public appearance Jesus’ cousin John the Baptist (who no doubt knew all about the circumstances of Jesus’ birth) pointed to Jesus and declared to the crowds, “Behold the Lamb of God.”

After the message from the angels, the shepherds knew they were not going to see just any baby. They knew from the prophecies that he was the promised Messiah, the Good Shepherd, the Suffering Servant and the Lamb of God.

Read Dwight Longenecker’s book The Mystery of the Magi-the Quest to Identify the Three Wise Men.  Check it out at dwightlongenecker.com

For more on the birth date of Jesus, check out The Stream series “Born on Christmas Day”