My Tribute to Mother Angelica, Daughter of the Risen Savior 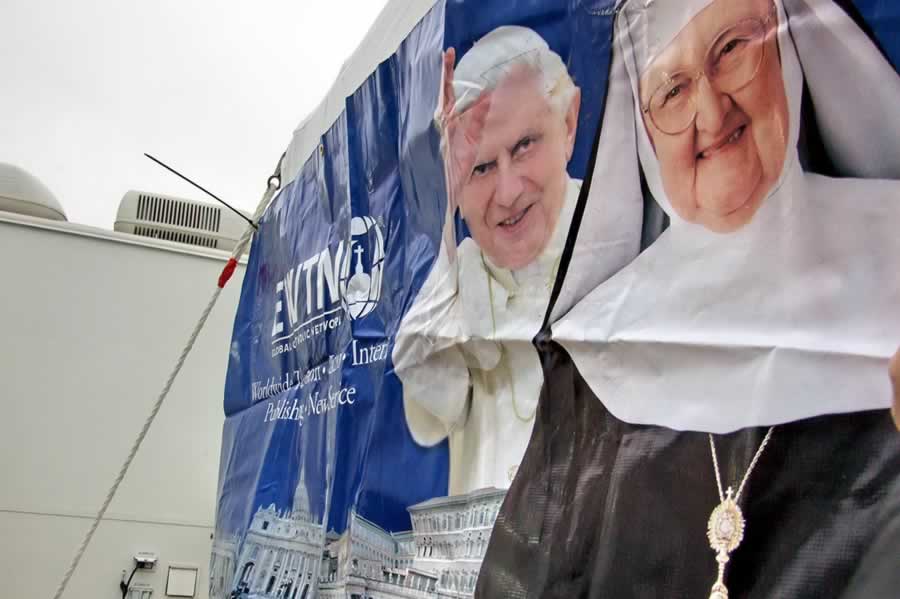 Like millions, the death of Mother Angelica has moved me deeply. I join my own voice to the throngs who, over the coming days, will share how this courageous woman of God, faithful bride of Christ and beautiful religious sister, changed their lives. How utterly fitting that the Lord would call her on Easter Sunday; she was a seed of the Resurrection of Jesus Christ, helping us all to find the empty tomb and encounter the Risen Lord.

It was a privilege to assist Fr. Michael as the Lord worked mightily through him in those years of spiritual struggle and rebuilding.  I did so first as a student leader. Then, as I could while pursuing a law degree in nearby Pittsburgh, and staying in the local area to continue, along with my wife Laurine, to be a part of the great work of renewal and restoration on that campus.

Like Mother Angelica, Father Michael Scanlan had a dynamic relationship with the Risen Lord, a deep love for the Catholic Church and a love for the whole Christian people. He also possessed the core Christian courage needed of any man or woman who is going to be used by the Lord to do great things for Him.

That kind of courage forges the material out of which founders are hewn. It comes from a deep, ongoing relationship with the Lord, rooted in the life of the Holy Spirit. It is forged by living faith, and fed by genuine prayer and participation in the Sacramental life. I have been blessed to have had several teachers and models who have shown me such a living witness to the reality of God’s presence in my lifetime.

By then, that once decaying College, morally deficient and near financial bankruptcy, had been resuscitated in the Living Lord, under the leadership of that courageous Franciscan priest Fr. Michael Scanlan. And, a vibrant lay community of faithful Catholics, with ecumenical hearts, were serving in many ways as a resource to the work of the University. My wife and I were included in that supportive lay community, at the time.

My primary role in my work at the University was in evangelization and faith formation. First, as a Dean of Students, and then as a Dean of Evangelization, I served under Father Michael. I was also charged with reaching out to the broader Christian community and providing leadership to the conferences which had become a strong part of the growing footprint the University was having in the New Evangelization of the Catholic Church.

My personal calling also involved writing to, and public speaking in, the broader Christian community, as it does to this day. I was invited to appear on Mother Angelica back then, to  speak on the topics of New Evangelization and living Christian marriage and family life as a domestic church. That is how I met Mother Angelica. It was for her flagship program, Mother Angelica Live.

The moment I met this woman whom everyone simply called Mother, I felt comfortable in her presence. Her smile drew you in to her heart. And, you knew right away, this was a woman who experienced the joy Jesus promised to all His followers. She radiated it. She was also tough, in the way that fighters need to be, because she knew the admonition of the Apostle Paul is true, that our struggle is not against flesh and blood. (Eph. 6:12) She shared with me of her early days, her sense of calling, and her response! Thank God for her response.

Mother Angelica was filled with the Holy Spirit and, just being in her presence, it rubbed off on you. You also knew that you were in the presence of a leader. Mother’s strength came from being rooted in the Rock, Jesus Christ. Her very presence brought a sense of stability and authority, infused with the love of God which radiated from her. What is best called her countenance, just made you want to be with her and listen to her wonderful testimony of and to the Lord.

We had a delightful interview on that Live show. In fact, doing the Live show was exhilarating and inspired me to share the Good News with even greater boldness. After the show, she asked me, a young Catholic layman at the time, to come back and do an entire series. I accepted the offer and did several series for EWTN, including “The Domestic Church: Hope for the Catholic Family.”

During my times spent at the Eternal Word Television Network recording, I had further encounters with Mother. They were just all as memorable, even if much shorter. That was because she was one of those people who clearly walked with — and in — the Lord. You just wanted to be with her, and when you were, you knew you were with Him.

Mother Angelica had the kind of spiritual authority which did not need to be pointed out by anyone else, because it functioned in a naturally supernatural way. You just knew the Lord was leading — through her. I end with one story which comes to my mind and heart which demonstrated that authority. She truly was a daughter of the Risen Savior who helped us all to realize that He has been raised and Lives!

During the filming of one of the series I did, a fire alarm went off and we were all directed to vacate all of the buildings. We later found out there was a gas leak in an adjoining building. As everyone vacated the buildings and gathered on the lawns across from the facility, I saw Mother directing the sisters of her community. She was helping to lead them to safety, as a good mother would do for her daughters. I noticed a look of deep concern come over her face. She spoke loudly to one of the sisters, “Where’s Jesus?” She repeated again, “Where’s Jesus?”

From the distance, I heard another female voice respond, “Don’t worry Mother, we have him.” Out of the corner of my eye, I saw this smiling religious sister carrying the ciborium, the sacred vessel filled with the consecrated hosts from Holy Mass which are left in the tabernacle for veneration and to distribute to the sick. Apparently Mother and the Sisters had been in prayer in the Chapel when the orders to vacate all the buildings came over the loud speakers.

A huge smile formed on her face. It also formed a photographic imprint in my young mind. It stays to this day whenever I think of her. My memory of Mother Angelica was frozen at that stage of her life. In fact, when I heard that she passed to the Father’s house on Easter Sunday, at 92 years young, I pictured a younger Mother Angelica. I was reminded of one of the favorite sayings of St John Paul II, “Christ is forever young.”  Mother is with Him now, and I know she is radiating that joy, fulfilled and perfected.

I am 61 years old now. I have not had much personal interaction with Mother for years. The last correspondence from her came by way of a kind, personal handwritten note at my ordination to the Diaconate in Christ twenty years ago. I pray that I can finish the race, however many years the Lord has assigned to me, with even an iota of the kind of courage, living faith and spiritual beauty which she offered to us all.

Mother Angelica, thank you, for a life well lived and for your beautiful service to the Lord and His Holy Church. Thank you for your vibrant witness to Christian courage. Mother Angelica, pray for us.

Originally published at Catholic Online on March 28, 2016 and is reprinted with permission.